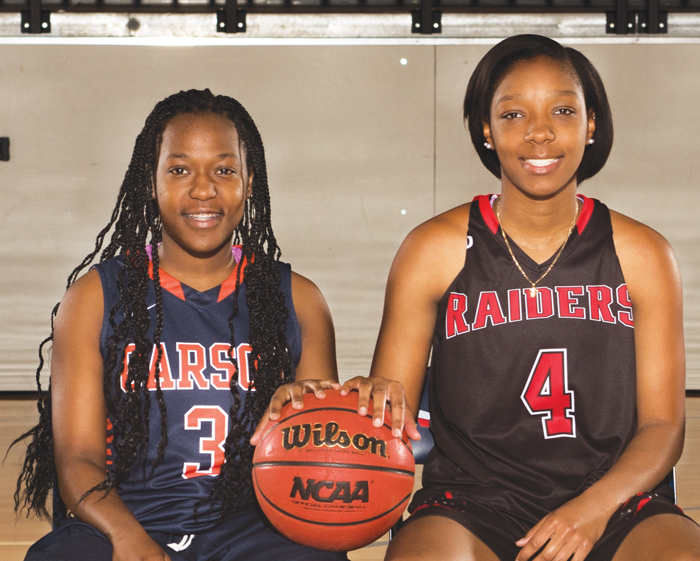 That’s a fire (Gabriel) and ice (Downs) duo with very different body types and skill sets, but they both achieved results that are hard to dispute.

C0-winners in basketball isn’t standard operating procedure for the Salisbury Post, but this wasn’t a routine season for Rowan’s girls’ teams. Carson (25-4), West (21-8), Salisbury (19-6) and South (18-9) all had marvelous seasons at the same time. That isn’t easy to do because those teams are constantly colliding, beating up on each other, whether it’s non-conference games, conference games or tournament games.

“Believe me,” said John Davis, who coached South. “Those were four very exceptional basketball teams in the county this year and all four had great players.”

West was a third-round playoff team. Of the Falcons’ eight losses, five came against county opposition. Four were to Carson.

Salisbury was a crippled team at the end after Bryanna Troutman went down with an injury, but the Hornets were 9-0 at one point. Salisbury took care of a very impressive Ledford team twice. Salisbury’s nemesis was South Rowan. The Raiders accounted for half of Salisbury’s six losses, and South’s Christmas tournament semifinal win over Salisbury was just a humongous one for the Raiders’ program.

“Those games with Salisbury, those were our best games, our most satisfying games of the season,” Downs said. “To beat them three times was amazing. We match up with them.”

While it was able to handle Salisbury, South lost twice to Carson and once to West Rowan. South lost in the second round of the state playoffs in a down-to-the-wire scrap on the road against eventual regional champ and state runner-up North Wilkes.

Carson went 9-0 against county foes in a year. That’s a compelling stat that make it very hard to argue against Gabriel as the player of the year.

Without Gabriel, it would have been hard for Carson to be special. With her, the Cougars won hardware and were ranked in the top 10 in the final 3A poll. Carson played in the third round of the 3A state playoffs and lost on the road at eventual 3A champ Northern Guilford by nine. If you’re wondering, Gabriel scored 19 in that one.

Gabriel was a fine player when she was a freshman, making second team all-county. Growth continued through her sophomore and junior years, and she moved up to the all-county first team as a junior.

But her senior was just startling. She took another step forward, actually several steps forward.

“She did get better each year, but her senior season was just so outstanding,” Carson coach Brooke Stouder said. “It was remarkable and I’m just very proud of her. She got better with her shot selection and better at making outside shots. She was better finding her teammates. She was better at closing games. She played good defense. Everything she did, she did better.”

The most obvious difference in Gabriel as a senior was she offered a consistent 3-point threat. She shot a very respectable percentage and made 51 3-pointers. That changed how teams game-planned to defend the Cougars.

“Everyone has always played me to drive, so I’ve had to continue working on shooting the ball better,” Gabriel said. “This definitely was my best season. The team broke records and accomplished things Carson had never done before. Just about everything we dreamed, we made it happen,”

Gabriel averaged 17.4 points while leading the Cougars in assists and steals. At 5-foot-5, she was tough enough and strong enough that she was  third on the team in rebounds.

Gabriel’s bread and butter has always been the free-throw line. That’s where she got 168 of her 487  senior points. That’s an extraordinary amount of free throws. Gabriel shot nearly as many as the rest of Carson’s team put together.

She made 77 percent of her free ones. That’s what made her such a great closer. With three or four minutes left and nursing a lead, Carson would spread the floor, letting Gabriel handle the ball and make the decisions. Teams had to chase her and foul, and she generally put them away.

Gabriel was Christmas Tournament MVP as  Carson beat East, West and South. Gabriel was named North Piedmont Conference Player of the Year after Carson shared the regular season title with North Iredell. Then in the conference tournament championship showdown, Gabriel made several clutch, ice-water shots and poured in 26 points in a 51-50 Carson victory.

Postseason accolades continued to come in for Gabriel, including third team all-district honors for a wide area of the Piedmont and Foothills.

On Wednesday, Gabriel became just the second Carson girl in 12 seasons to sign with a Division I basketball program when she inked with South Carolina State.

“I made up my mind four years ago that I was going to be a college player,” Gabriel said. “I’ve been working for that goal every day since then.”

South Carolina State had a coaching change in late March, with Roderick Woods elevated from assistant coach to interim head coach. Woods had come to watch Gabriel play against West Rowan and knew she was a player that he wanted.

While Division I is going to be a challenge for the 5-5 Gabriel, there’s no doubt that she has the will and the drive to succeed.

“What I like best about South Carolina State is that the freshman dorms are close to the gym,” Gabriel said. “I’ll be able to keep getting shots up every day.”

Gabriel made more shots for Carson than anyone ever dreamed she would. She leaves as the school’s all-time scoring leader with 1,679 points.

Downs has another year and figures to become South’s all-time scoring leader as a senior. Downs already has amassed 1,532 points. Avery Locklear’s school record of 1,795 points was set in 2015 and is looking pretty fragile.

Downs scored 572 points, a school record, this season, after pumping in 541 on her way to county player of the year honors as a junior. She tallied 419 as a freshmen.

Among other things, Downs was named district player of the year this season  by the North Carolina Basketball Coaches Association and was also a third team All-State pick by the NCBCA. If you’re looking for arguments for Downs as player of the year, those two accolades are pretty strong.

Down’s stats were are as amazing as ever — 22 double-doubles this season, with a couple of triple-doubles. She averaged 21.2 points and 12.8 rebounds per game, while throwing in 3.3 steals and 1.9 blocks.

“She’s just really special as a 5-11 point guard and can do anything on a basketball court,” Davis said. “She put up the stats she did against an incredibly brutal schedule. Our league (Central Carolina Conference) was a tremendous 2A league. Four of the top 18 in the 2A rankings were in our league and eight of the top 64. We had real tough stretches against Ledford and East Davidson, but Janiya always kept us focused and we always kept our heads above water. She’s a great team player. With Janiya, it’s always about us and we. It’s never been about her.”

Just how good Downs is was made crystal clear in the 2A state playoffs. When South traveled to Maiden as a first-round underdog, Downs tossed in 31 to lead an overwhelming victory. When the Raiders headed to North Wilkes for Round 2, she battled for 30, half of South’s total, in a 63-60 defeat.

Downs indicated she’s been recruited by a number of schools, including D-Is such as High Point and UNC Wilmington.

She has a new AAU team for the spring and summer and will be competing with NC Team Express. She should get plenty of exposure. She’s in no hurry on the recruiting front, confident that she’ll find the right fit.

She also has no problem with being “only” a co-player of the year this season.

“In this county, being player of the year is exciting,” Downs said. “It’s a thrill, a great accomplishment. I thank my coaches and teammates.”