‘Like sitting down, talking with your mom’: Rowan County remembers a gracious Barbara Bush 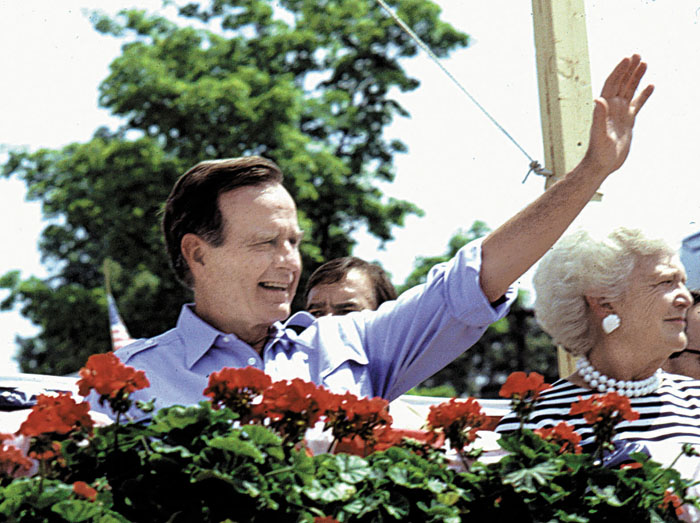 SALISBURY — Search through the photo albums and scrapbooks of many Rowan County residents even today, and there’s a chance you’ll find images of Barbara Bush shaking hands, cheering on her husband, carrying on conversations and holding up babies.

The first lady made an impression when she and her husband, President George H.W. Bush, decided to spend their July Fourth afternoon in the tiny town of Faith.

Judy Hampton, then mayor of Faith, will never forget that day in 1992. Saddened by Barbara Bush’s death Tuesday, Hampton felt a flood of wonderful memories, especially in recalling how down-to-earth the first lady was.

“It was just like sitting down and spending time with your mom, sister, aunt or family,” Hampton said Wednesday. “She was the most gracious person I had ever seen.”

That day, Hampton rode with the Bushes in the motorcade that carried them from their helicopter landing at East Rowan High School to the Faith ball field, where the president spoke, played softball, and he and Barbara interacted with the crowd, estimated at 30,000 to 35,000.

Hampton had the honor of introducing the president to the thousands sweltering under 94-degree heat. She then sat down next to the Bushes’ grandson, 7-year-old Sam LeBlond. Barbara Bush was on Sam’s other side, with her arm around his chair.

Hampton still cherishes the image of Barbara Bush, the doting grandmother, watching the softball game with the young boy and cheering on her husband.

“She was like somebody from Faith who came to visit,” Hampton said. “… She just spoke to everybody, and everybody I talked to said the same thing. … And, of course, he was very nice, too.”

Hampton, Tim Williams, Donnie Moose and Daisy Bost worked especially hard in the weeks leading up to the Bushes’ visit.

Hampton and Bost had lunch together Wednesday, and they confirmed to each other how Barbara Bush’s death made July 4, 1992, come alive again.

That day, Bost spoke with the first lady, who introduced her grandson. Barbara Bush was not stand-offish in any way, Bost said, and she enjoyed meeting her. They traded notes as grandparents.

“She was just like me,” Bost said. “She loved her grandchildren.”

Bost described her as “a beautiful lady, very striking in appearance.”

The Bushes’ July Fourth visit to Faith, in the middle of a presidential election year, is one for the local history books. The couple also had a close political connection to Salisbury native Elizabeth H. Dole and her husband, Bob, both former U.S. senators.

Bob Dole and George Bush were at times political rivals within the Republican Party, and both men were defeated in runs for the presidency by Democrat Bill Clinton — Bush in 1992 and Dole in 1996.

The Doles issued a joint statement Wednesday on the death of Barbara Bush.

“Last night, America lost a national treasure,” they said. “Former first lady Barbara Bush was dedicated to her family, devoted to her country and inspired millions of Americans with her grace, dignity and humor.

“Few families have defined American politics as much as the Bushes, and as the matriarch and ‘enforcer,’ Barbara instilled strong patriotic values within her family and across the nation.

“From championing literacy initiatives while in the White House, to her vocal and steadfast support of military families, Mrs. Bush lived a life of selfless public service.

“Our deepest condolences to our dear friend President George H.W. Bush, and the entire Bush family.”

When the late Rose Post wrote about Barbara Bush’s visit to Rowan County in 1992, she led her story with this observation:

“No one at the Faith Fourth doubted President Bush’s claim that his wife, Barbara, is his secret weapon.”

She walked to the microphone after a little consultation with her husband and simply said, “God bless you all. Thank you.”

People in the Faith crowd apparently were concerned about the first lady’s attire in the scorching heat. She was wearing long sleeves and a high-necked blouse, but Barbara Bush seemed comfortable.

“Women everywhere — commenting that she’s much slimmer than she looks on television — reached to shake her hand and speak to her,” a Salisbury Post story said. It also quoted Faith resident Lola Nance, who had a brief conversation with the first lady.

Tim Williams, Faith’s mayor pro tem at the time, had the honor of  sitting down for a picnic lunch with the Bushes. Tim’s wife, Becky, and their children, Justin and Holly, joined them.

One of the Bush campaign’s production chiefs wanted the president and first lady to sit with their backs to the crowd as part of the staging he had in mind.

But Barbara Bush would not hear of it. Back in 1993, Williams remembered it this way when recalling the president’s visit: “Mrs. Bush said, ‘I’m not going to sit with my back to these people.”

She stood and moved to the other side.