Feel the heat of ‘Running on Fire’ 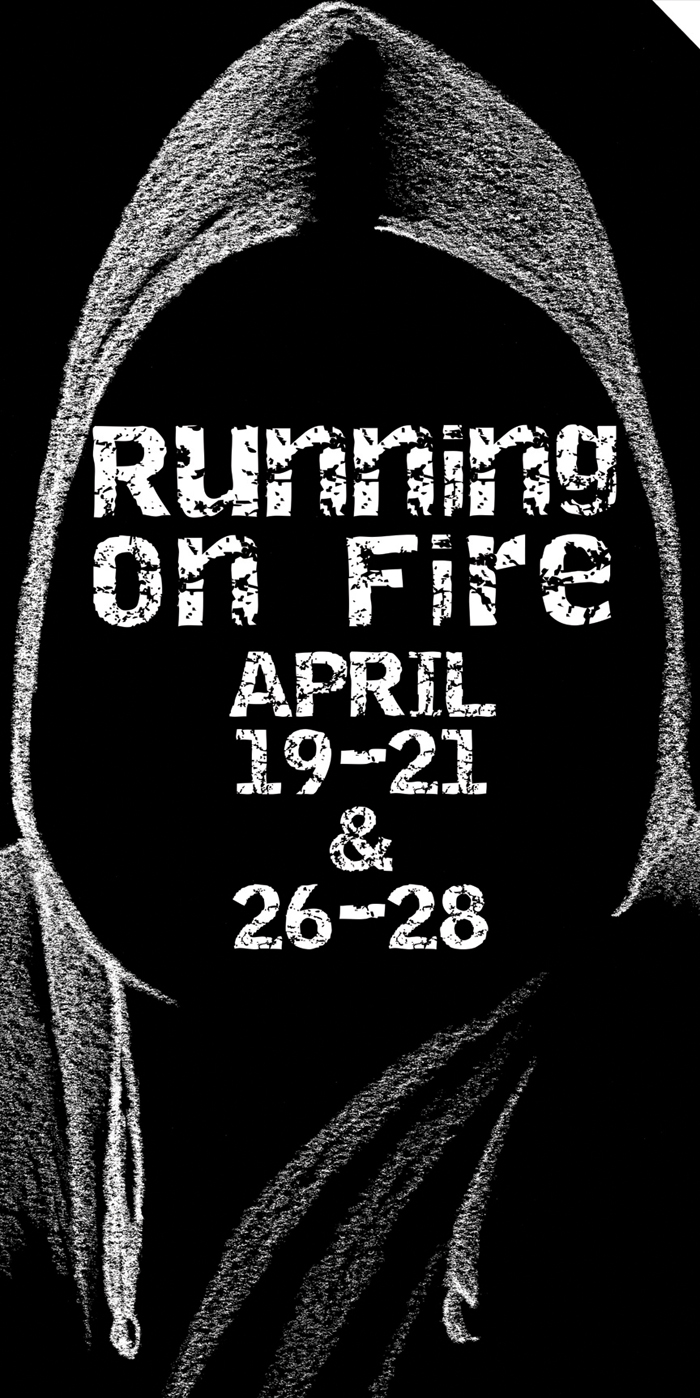 Be ready for an intense, thought-provoking evening when you see “Running on Fire” at Lee Street theatre.

Aurin Squire’s play asks lots of questions that have no comfortable answers. He’s not heavy-handed, with generous bits of humor throughout — though some of that humor is the sort of nervous laughter reserved for sticky situations.

Craig Kolkebeck, again, directs with finesse and sensitivity, and the young cast isimmersed in their roles. With a high-risk, tense climax, the play then eases you down without a crash but a heavy fall.

“Running on Fire” will also stick with you as you try to find your own answers to the serious and persistent questions it raises. Society at large needs to find answers, as well.

The play is about an African-American graduate student at an elite college in a small, depressed town. Reshaud Brown plays Marcus, and his performance on patrons night earned him a loud round of applause — the audience was already standing to show their enthusiasm.

Marcus is trying to do the right thing, getting ready for a fundraising marathon for a charity on campus. But because of his skin color, a recent rape in the nearby park and simmering racial tensions in the town, he, along with other African-American men, is under suspicion. When he goes to pick up donations for the marathon, he is stopped by a campus police officer, who takes the money because Marcus has left his student ID in the apartment.

His girlfriend, Hannah, is white, socially progressive and privileged. Alyssa Whiting plays the conflicted and challenged young woman with all shades of emotion. There are moments when she and Brown say explosive words and phrases that will shake the audience.

To make matters worse, their gay friend Garrett, portrayed by Hoke Pittman, is rabid about the marathon, which will feature a famous runner. Garrett wants the city to give the campus group sole use of a city park on that day.

Destiny Stone, who plays the firecracker Jada, complicates matters, with her group for children from the inner city. They have use of the park on Saturdays, so the children and teens can spend time outside, playing, running, letting off steam.

Garrett is unreasonably possessive of the race and the park and his position in the world. Jada fights back for people who have almost nothing. It’s a story of the haves and have-nots, as much as it is about race.

Marcus’ attempts to get $524 in donations returned to him and the debate over the park’s use ignite a flame that flares up fast.

The story is oft-repeated: A group of kids from the inner city is denied in favor of the elite college. Jada has every right to feel her group has been pushed aside again, that people with nothing are ignored and denied.

Marcus is torn. He has one foot in both worlds. To complicate things further, Black Reason stands to the side and lectures him about being “a Negro.” You can’t rock the boat, can’t stand up or stand out.

Tyler Robinson, long and lean, dressed in tails and a battered top hat, is fascinating in this part. His asides can be very funny, his warnings ominous.

Marcus thinks he’s beyond all that. Black Reason says it never goes away.

Pittman, who is petulant and vindictive as Garrett, also plays an officer — first campus police, then city police — who “is just doing his job,” following procedure, reacting based on others’ actions. Pittman is cold, fierce and more than a little frightening as the officer.

Meanwhile, on two screens above the stage, various scenes play out. The YouTube cast of Chaz Cable, Krissey Browder, Jayla Allen and Mason Livers debate the college vs. youth conflict on Facebook, throwing out racist remarks, calling each other names, spewing profanity at each other.

Sadly, all of these actions, on screen and on stage, ring of truth. Anyone paying attention to the state of the city, state and country has seen it. The sides are firmly entrenched in their beliefs, right or wrong, and the middle ground seems to crumble away.

Squire doesn’t have answers, but he certainly puts the questions in the spotlight. Marcus’ ultimate confrontation with police escalates into a terrifying nightmare, played in slow motion. Tension becomes almost unbearable as the takedown unfolds. It can’t end well. In fact, it looks like Marcus is going to be another statistic.

What happens next is chilling, sad, wrong and almost inevitable given the current climate.

See this play. Talk about it with your friends of all colors and creeds. Listen to your inner voice carefully.