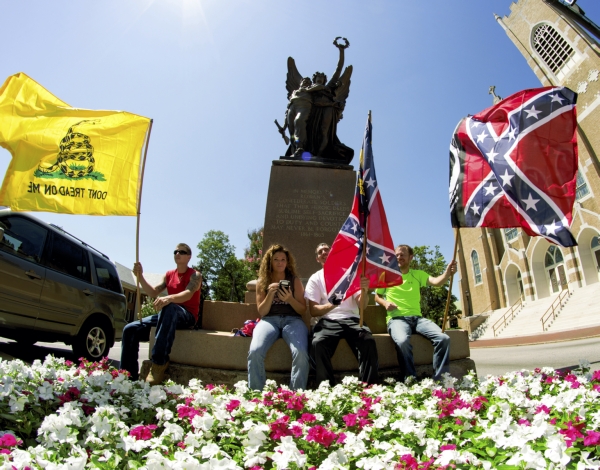 Debates over the Confederate flag and monuments reached Salisbury after a mass shooting at a Charleston church this year. File photo by Josh Bergeron/Salisbury Post

Editorial: Protecting us and our freedom

Considering the volatility of public discourse today, Salisbury City Council would be wise to require permits for planned public demonstrations, protests and rallies that involve more than 10 people.

That’s the guideline discussed last week by a council committee studying free speech rights and the special events permit process. To protect the public and participants, city officials need to know in advance when larger groups are planning to demonstrate — not to stifle free expression, but to plan an adequate police presence.

Free speech sounds like a simple and forthright concept. In the United States, we can voice our views freely without fear of government censure. The issue becomes complicated, though, when cities that require permits for special events consider how to handle protests and the like. Government must avoid being heavy-handed and violating people’s rights, but it cannot leave the door open to pandemonium — if that can be helped.

Mayor Pro Tem David Post and Council member Brian Miller are on the committee reviewing the free-speech aspects of the special permit process. The size of the group requiring a permit is just one aspect under discussion.

The need for clarity was evident in 2015, after the Charleston church massacre ignited debate across the South over the Confederate flag. Dueling rallies popped up in downtown Salisbury, with two dozen people waving Confederate flags around the Confederate Monument and another group counter-demonstrating with black power flags and signs several blocks away.

At first a police officer asked members of the black power group if they had a permit, but a supervisor called the officer off.  Rory Collins, then the city’s police chief, let both groups protest spontaneously but announced later that any further demonstrations would require a permit. Collins was criticized for not sticking to a city ordinance that requires groups to get a permit through the Police Department at least 48 hours in advance. But, as the chief said at the time — and David Post alluded to at last week’s meeting — the constitutionality of requiring a permit on such demonstrations is in question.

Even the American Civil Liberties Union recognizes the validity of requiring permits in some instances, such as when streets have to be closed, amplifiers used or public parks and plazas occupied. However, the ACLU says the First Amendment prohibits such an advance notice requirement from being used to prevent protests in response to recent news events.

Advance notice and permits cannot guarantee peaceful demonstrations. Other factors come into play, as the clash in Charlottesville last August proved when fights broke out and one person died. But public safety concerns more than justify requiring permits when more than 10 people plan a public demonstration and exercise their right to free speech.

If the North Carolina lawmakers who brush aside questions about sensible gun reform are serious about improving mental health care... read more