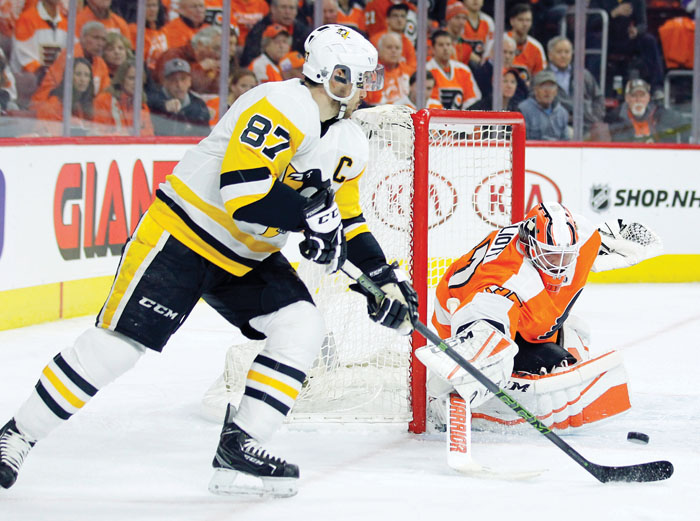 PHILADELPHIA (AP) — Sidney Crosby scored his fifth goal of the series and became the Pittsburgh Penguins’ career postseason points leader in a 5-0 win over the Philadelphia Flyers on Wednesday night.

The Penguins lead the first-round playoff series 3-1 as its shifts to Pittsburgh for Game 5.

Matt Murray stopped 26 shots for his second shutout of the series and the two-time defending Stanley Cup champion Penguins are a win away from playing in the second round for the 11th time in the last 12 seasons.

Crosby scored in the second period for a 4-0 lead and passed Pittsburgh owner and Hall of Famer Mario Lemieux for most playoff points with 173. Crosby and the Penguins followed a 7-0 Game 1 win and a 5-1 Game 3 victory with another dominant outing.

Evgeni Malkin, Phil Kessel and Kris Letang each scored to give the Penguins a 3-0 lead in the second and chase Flyers goalie Brian Elliott. Riley Sheahan made it 5-0 late in the third.

NEWARK, N.J. (AP) — Nikita Kucherov scored two goals, set up another and knocked New Jersey’s top defenseman out of the game with a big hit, and the Tampa Bay Lightning moved within a game of making the Devils’ first trip to the playoffs in six years a short one.

J.T. Miller also scored and had two assists, and Vezina Trophy finalist Andrei Vasilevskiy stopped three breakaways in making 27 saves as the Lightning bounced back from a loss in Game 3 to tale a 3-1 lead in the first-round series.

Tampa Bay can wrap up the best-of-seven series in Game 5 at home on Saturday.

Kyle Palmieri scored on a 5-on-3 advantage for the Devils. Cory Schneider made 34 saves.

New Jersey’s Sami Vatanen was knocked out of the game on the hit by Kucherov late in the first. No penalty was called but Kucherov appeared to jump before hitting Vatanen in the shoulder and head area.