Carson’s Brooke Stouder is girls basketball Coach of the Year 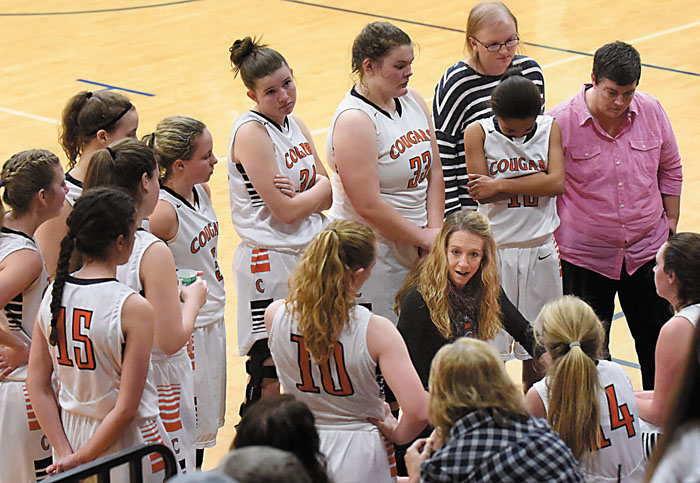 Wayne Hinshaw file photo/for the Salisbury Post ... Carson coach Brooke Stouder, in the huddle during a game this season. Stouder’s team was 25-4 and she is the Rowan County girls Coach of the Year.

SALISBURY — Fresh off a season where girls’ basketball in Rowan County was played at an extremely high level, Carson coach Brooke Stouder and her Cougars rose above the rest.

Fittingly, the leader of the county’s best girls’ team in 2017-18 has been named the Rowan County Coach of the Year.

“That (honor) is truly a reflection of our team and what we have been able to accomplish this year,” Stouder said, “We came together as a team and accomplished a lot of great things. We have a great group of kids.”

The list of achievements for the past season is long and impressive: The Cougars set a record for wins in a season with a 25-4 mark, a share of the regular season title with longtime nemesis North Iredell, followed by a thrilling 51-50 win over the Raiders in the conference tournament title game, a first for Carson. In the process, Carson won its first ever Sam Moir Christmas tournament championship, 54-40, over South Rowan.  Carson went three rounds deep in the state 3A playoffs before falling to eventual state champion Northern Guilford.

Carson shook off an early loss to 4A power Hickory Ridge to rip off 13 wins in a row. A couple of close January losses to North Iredell slowed the momentum, but the Cougars then rolled up eight more wins at the end of the regular season and into the tournament and playoffs before the season ended at Northern Guilford. Leading the way were senior point guard Olivia Gabriel (21.3 ppg) and multi-talented junior forward McKenzie Gadson. Gabriel graduates as the school’s all-time scoring leader at 1659 points while Gadson, the reigning county female athlete of the year, has 1,040 with another season left.

“It really was an amazing year for our team,” Stouder says with pride. “I have coached all kinds of teams as far as wins and losses go, so that allows you to appreciate where we are now and where we were 10 years ago.”

Actually, it was 12 seasons ago when Jesse Carson High School first opened its doors to students. When the first ball was rolled out on the practice court, Brooke Misenheimer Stouder was there as a head coach, barely two years out of college with a resume of one season as a jayvee coach at South Stanly. The Carson administration took a chance on her and it has paid off with the development of a true basketball program built on her influence and coaching philosophy.

“The administration was very patient with me and they really gave me a chance,” Stouder says. “I mean, we won just four games in the first three years (4-67). It was rough and it was really a growing experience for me and our players. But every coach wants to build a program and get players to buy into what we are doing. I think we are getting there.”

Over the next decade, the program grew and the talent developed to the point that Carson has posted a 124-64 record the past seven seasons. Prior to this year, Carson had another great run with Kelly Dulkowski, Allison Blackwell and Chloe Monroe, capped by a 23-4 season in 2012 that earned Stouder her first county coach of the year honor. Thanks to her stellar season in 2017-18, Stouder now has a 164-151 coaching mark, placing her fifth all-time in Rowan County for girls’ coaching wins. She just surpassed her former high school coach, the late Gina Talbert of East Rowan, on the wins list.

“I have wanted to be a coach since middle school,” she says, “and I have been fortunate to have some really good coaches. I loved my middle school coach at Erwin (Sandy Robertson Lytton) and she was the one who probably instilled that work ethic in me.”

Stouder played for some really strong teams at East Rowan under Talbert, featuring such outstanding players as Nicole Loggins, Julie Austin and Danielle Porter. She then went on the play at Pfeiffer College under current Catawba College women’s coach Angie Morton. “I had some really awesome coaches over the years and I had good relationships with all of them,” said Stouder.

She has other inspirations in her life, like her grandmother Rosalyn Misenheimer, a longtime educator in Rowan County and veteran coach Lu Gamewell, who currently assists her with the Carson team. “She keeps me calm because I tend to get excited at times,” she says of Gamewell.

Now, her latest and future inspiration is coming from her brand new husband, Jeremy, whom she married this past September. That event changed her life and her perspective, plus it immediately created a new joke about how Coach Stouder has been much more successful than Coach Misenheimer. She didn’t disagree.

“He (Jeremy) is a great guy and he has made me a better coach,” she says. “He is a basketball guy and is fully supportive of me because he knows what I am thinking and understands what I am dealing with during the season.”

As far as the future goes, Stouder is exactly where she wants to be and has no higher aspirations. She is a counselor and intervention specialist as well as the coach at Carson. She loves both jobs.

With a team that returns Gadson, plus a large contingent of talented freshmen varsity performers like Ellie Wilhelm, Colbie Perry and Lani Isley coming back, the future looks extremely bright for the Cougars.

“They are all good basketball players but they are also really good kids, they make good grades and they do the right things,” added Stouder. “I feel very fortunate.”

Prep Basketball: Gabriel and Downs share Player of the…