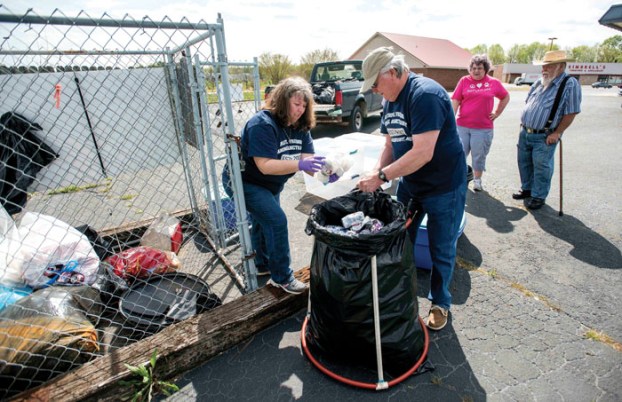 Lora Owen and her "can team" work hard on operating several aluminum collection points to resale to scrap metal companies to raise money for Faithful Friends. Owen and Chuck Hemperley fill one of the several bags with donated cans at Can Kennel No. 1 near West End Plaza on Statesville Boulevard. Jon C. Lakey/Salisbury Post

SALISBURY — If you think that collecting aluminum cans is a dirty job, you’re right. But neither rain, sleet, snow, nor hot or cold weather keeps the Can Team volunteers from their task.

Since its inception in 2008, the team has raised more than $56,000 for Faithful Friends Animal Sanctuary.

Lora Owen leads the team, and she became a volunteer with Faithful Friends shortly after its formation. At the time, the organization was holding frequent fundraisers to pay for a building, and organizers figured aluminum can collection was free money.

“This was a way we could earn extra money and not take money out of people’s pockets,” Owen says. “People could still recycle and help the environment. The program has blossomed over the years. Our volunteers have continued to work together. We’re just like a family.”

“They’re stalwart stewards of animal protection,” says board member Julie Pinkston. “The team members have gone over and above what anyone expected. Their hearts are in the right place. It’s a dirty job, and it’s certainly not an easy job.”

The Garden Greenhouse, Speedwash and Critters sites are available only during business hours. The other sites are 24-hour drop-offs.

Although $56,000 sounds like a lot of money, Owen notes that it takes $10 per day to care for each animal at Faithful Friends. That’s why the Can Team keeps keepin’ on.

Businesses such as McCanless and Rolling Hills golf courses donate cans, and occasionally children or school groups will collect them.

“We need more helpers to pick up the cans,” Owen says. “It’s nasty work, but I’m not complaining. We sort through the cans and take them to be sold. I don’t think there’s a fast way to do what we do. We don’t see everyone who leaves bags for us, but we appreciate it so much. Every can helps.”

“The main reason we do this is for the animals,” she adds.

Owen and her mom can be found at the shelter most weekends, volunteering at programs or tending to the flower garden. Her mom loves flowers.

“We’ve got to keep going,” Owen says of the team. “We can’t be lazy. I don’t have any kids, so these are my children.”

Owen has had several cocker spaniels over the years. Her current one is Pup Pup, who she got from Faithful Friends in September. She also has a cat, William R. Davie.

Owen is not tempted to adopt more animals because she says that they’re getting such good care at Faithful Friends. Others on the Can Team have adopted animals from there, she says.

Owen supports all groups in the area that help animals. “If we all do well, the whole climate for animals will change.”

To donate cans to Faithful Friends, call their office at 704-633-1722 or email Lora Owen at lowen@carolina.rr.com.

SALISBURY — Mother Nature started a job Saturday that the city of Salisbury will now complete — removal from Chestnut... read more