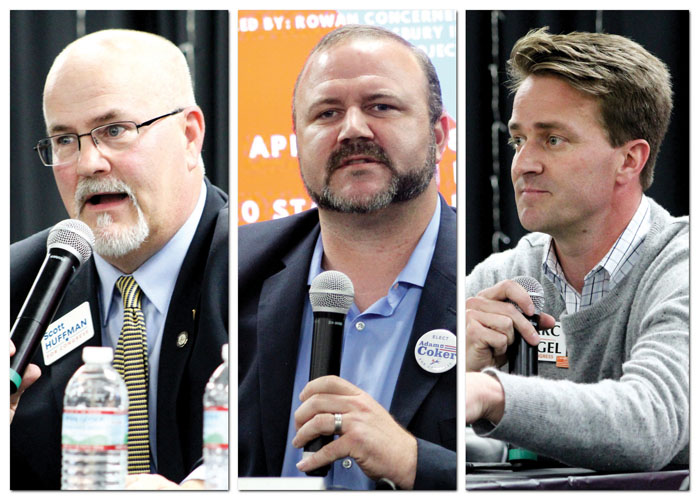 SALISBURY — Three of five Democratic candidates for Congress participated Tuesday in a forum at Mission House.

The forum was sponsored by Project Cover, Rowan Concerned Citizens and Salisbury Indivisible. It provided participants a chance to respond directly to questions and concerns from potential constituents.

In attendance were Adam Coker, running for the Democratic nomination in the 13th Congressional District, and Scott Huffman and Marc Tiegel, running in the 8th District.

The Rev. Dee Ellison, executive director for Project Cover and senior pastor of At the Cross Ministries, served as moderator. She said all incumbent and challenging candidates were invited.

Current Reps. Ted Budd, R-13, and Richard Hudson, R-8, did not attend. Also absent were Democratic hopefuls Frank McNeill in the 8th District and Kathy Manning in the 13th, and Libertarian Tom Bailey in the 13th.

Budd and Hudson were in session, and Manning had a prior commitment in Statesville.

Candidates were given one minute to answer a variety of both preselected and audience-submitted questions. They included:

• In what ways does the prison system need fixing?

Huffman: “Right now, we have to stop the pipeline to prison. People who have drug addictions are being treated like criminals. … We’ve got to stop treating people like they’re criminals because they have problems coping with life.”

Coker: “The issue we need to address seriously when we’re dealing with criminal justice reform is violence. We need to work to get violent people who are felons and look at keeping them in prison longer … and then work to reduce recidivism. ”

• What is the most important issue Congress needs to address today to prepare for the future and promote the livelihood of our next generation?

Coker: “We have a new economy that came here in the last 20 years. It’s called the gig economy. It is projected in the next 15 years that one in two workers will be 1099, gig employees. … It is most critical for Congress to prepare for that coming economy by giving us an option to opt out of a full-profit health care system and choose Medicare for all so that we can know how much our bills are and so that we can budget and lead our families.”

Tiegel: “(E)ducation needs to be the top priority in America because without it, and as we continue to gut it, we become more ignorant. And that can take down a country. We have got to give our kids the ability to think independently and be creative because the jobs they’re going to have don’t exist yet.”

• What do you plan on doing to tighten gun regulations?

Tiegel: “The first thing we need to do is modernize our background check system. There is tremendous support for that across the aisles, … making sure we have red flags. Making sure that is updated on a national level so you can’t go county to county, state to state.”

Huffman: “I support the Second Amendment, but we have to remember what it says: a well-regulated militia. … I’m for any type of law that will mean that weapons of war are not in the hands of the public.”

Coker: “I am tired of listening to every NRA talking mouthpiece continually stigmatize the mental health community and scapegoat things to ISIS when we have a serious problem with young white men doing mass shootings in our country with assault weapons. We need to challenge our representatives to have honest conversations about the statistics.”

• What is the best way to bolster the U.S. economy and also to address poverty?

Coker: “I believe that health care in our country is becoming evil. I believe that we need to challenge the medical community to blow the whistle. The free-market economy does not bring about a moral system for health care where profit is what is most concerning for the providers and the insurers instead of our health.”

• Will you commit to have several meeting a year in Rowan County?

Tiegel: “Town halls are good. Individual sit-downs are good. … We’re just a vessel. You’re putting your knowledge into us. … It’s our job to stand up and be your voice, so if we’re not on the ground, we’re not doing our job.”

Huffman: “I’m going to design an app, because I’m an IT guy by trade, and I’m going to give every constituent or registered voter in my district an app to put on their phone to register when there’s a bill. … They will be able to vote yes or no or give me feedback if they want me to vote for that bill.”

• How do you feel about money or the donors having more power than the voters?

Tiegel: “What I’m trying really hard to do is find groups that I intrinsically believe the same things that they do. Those PACs I can take money from. That’s a hard thing to say, but that’s a practical thing to say. … We have got to get into a position where we can pass reform when it comes to campaign finance. This has gotten out of hand.”

Huffman: “I made a commitment to not accept any super-PAC money. … The reason they’re not listening to us (in Washington) is because we’re not the donor class. They’re listening to the money. I will listen to the people instead.”

Coker:  “I have not taken any PAC money at this point. … I would not be taking money from super-PACs, but I would be taking money from organizations that want to raise the minimum wage and bring Medicare for all in this country, and I can guarantee you the 1 percent does not want that.”

• Why should a voter choose you instead of your primary opponent?

Huffman: “I fought to help my community by serving in the United States Navy. I took an oath in this country to protect everybody, and that’s what I’ll do as your next congressman. I will work to serve every constituent in this district. … I believe that our government can be fair and good for all of us. Not those who seek to own it.”

Tiegel: “You have to have something, a part of you, where you’re called, where you can’t say no. That happened to me over the winter break. … You deserve someone who is going to represent you well. I might be that guy, I might not. But if I lose, I’m going to lose with integrity.”

Coker: “John Ossoff raised $27 million in Georgia and still lost because, at the end of the day, he wasn’t able to clearly articulate to people what his vision really was. That is why I am running. I believe that the Democratic Party’s feet need to be held to the fire, and if we don’t come up and start clearly … saying Medicare for all, we’re going to have serious problems as the Democratic Party in 2020.”