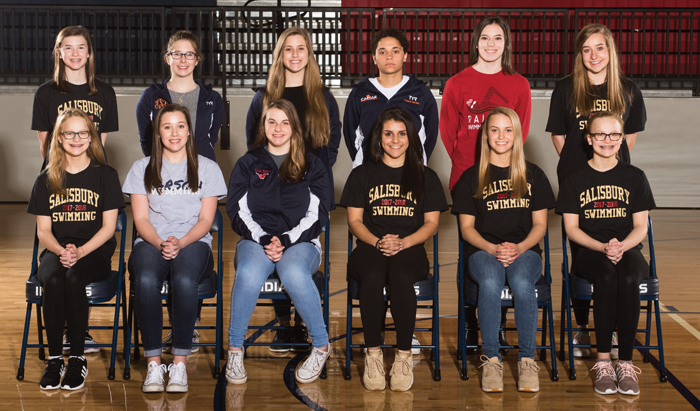 SALISBURY — It’s not easy to be intimidating when you’re 5-foot-2, but Salisbury’s Kathryn Morrison manages to pull it off.

All sunshine and grins out of the pool, Morrison has been a focused monster once she’s in it, and she’s an easy choice for Rowan County Female Swimmer of the Year for the fourth straight season.

“Oh, it still means a lot,” Morrison said with a laugh. “I knew this would be my most challenging season at Salisbury, with a bigger conference and with teams like North Davidson coming down to our league, but my senior season was everything I hoped it would be — for me and for the team.”

With Morrison leading the way, the Hornets were runner-up in the 10-team Central Carolina Conference and placed seventh in the 1A/2A State Championships in Cary.  Morrison led a tiny, four-girl contingent to Cary. For Morrison, fellow senior Mary Kaufmann and the freshman Knorr twins, Emily and Katie.

Morrison won the state title in  both of her individual events, taking the elusive 100 butterfly for the first time and then repeating as 100 backstroke champ.

“When she won that butterfly, despite being seeded fifth, I think it took a huge weight off her shoulders,” Salisbury coach Sallie Pittman said. “I knew she would be good to go in the backstroke. No way she wasn’t going to win that.”

Both of those events took Morrison 55 seconds in the water, but those 110 seconds of state immortality were the product of years of dedication and work.  The East Carolina-bound Morrison allowed herself a few happy tears after her fabulous final day of high school competition.

“I really wanted to win a state championship as a senior,” Morrison said. “To win two, that’s just a feeling that’s hard to describe.”

Before she excelled in the state meet, Morrison won two regional championships.

In the Rowan County Championships at the Hurley YMCA, Morrison led the Hornets to their third straight team championship.

“As great a swimmer as Kat has been, she’s been even better as a teammate and as a team leader,” Pittman said. “Our relay success meant as much to her as her individual accomplishments.”

Without Morrison, Pittman, the Rowan County Coach of the year, will rebuild around the Knorrs next season. Emily was regional champion in two  individual events, while Katie was county champ in two events.

Taylor Sever, county champ in the 100 freestyle and a member of the winning 200 free relay unit, led Carson to third place.

Brenna Culp had multiple second-place finishes in the county meet, and led East Rowan to fourth place in the county.