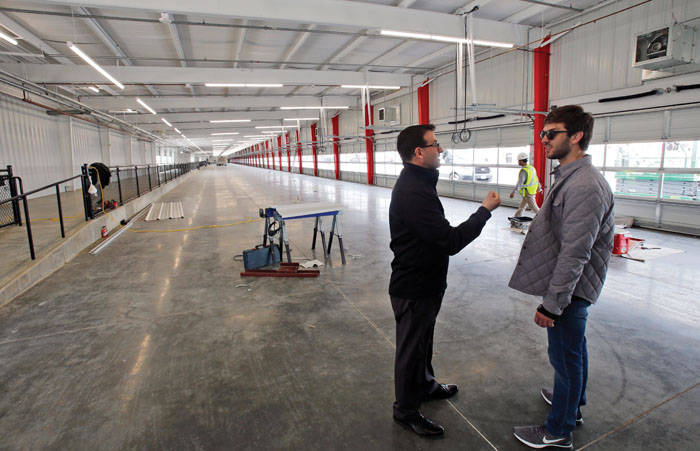 RICHMOND, Va. (AP) — Dennis Bickmeier is days away from hosting a NASCAR weekend, and finally able to relax a bit.

For months, the president of Richmond Raceway has admittedly had days where he was afraid to go inside the track, where a $30 million renovation meant the only vehicles making laps were bulldozers, backhoes and steamrollers. Now, with the track hosting NASCAR Xfinity and Cup Series races Friday and Saturday, it’s ready.

“Patience has been a little bit tough the last couple of weeks, I would say,” Bickmeier said, new asphalt having filled a huge hole in Turn One and more recently replaced the piles of dirt in the redesigned infield. “We know we’re going to be ready to go. It’s just when you see it, when you’re living it every day, it makes you a little bit nervous sometimes, but these guys have done an amazing job on the construction side to get us to this point.”

Projects completed include a massive new garage, with a walkway that by the September race will allow 8,000 to 10,000 fans to watch teams work on the car up close. They’ll access the infield via a new pedestrian tunnel under Turn One that is almost three times as wide as the previous one.

Also, old bleachers have been redesigned into a party deck area in Turn Four. The area will be called “Climax Corner,” and, in a nod to NASCAR’s roots, is sponsored by Virginia-based Climax Moonshine. One dollar from every ticket to the party decks will be donated after the race to local fire departments, Bickmeier said.

Once the weekend is completed, much of the infield asphalt will be pulled up and incorporated into concrete that finishes off the second half of the project in time for the fall face. There will be many new amenities added, too, including a party deck overlooking Victory Lane and gathering areas along the front stretch.

Bickmeier knew the redesign would take 18 months, and make the first weekend challenging.

Especially on days when it rained, or snowed.

“We’ve all been waiting for spring to arrive and so when you come down one day and you see 135 workers on the job site or more, and you come down the next day and there’s like 15, it makes you nervous,” he said. “I’ve tried to not come in as much on those days.”

It wasn’t until last week that visitors were allowed to come into the infield without a hard hat and neon vest, and crews have spent the time since polishing the improvements to make a good first impression on race fans.

FORD ANNOUNCES SWITCH TO MUSTANG BEGINNING AT DAYTONA IN ‘19

Ford is bringing its Mustang to NASCAR’s top series for the first time.

The American automaker said Tuesday the Mustang will replace the Fusion in the Monster Energy Cup Series beginning next February at Daytona International Speedway. NASCAR team owner Roger Penkse slipped earlier this year, divulging that Ford would have a new body in 2019.

This will be Ford’s fourth Cup model in NASCAR’s modern era (since 1972), following the Thunderbird, the Taurus and the Fusion.

Mustang has competed in the second-tier Xfinity Series since 2011, winning championships in all but one season.

Mustang is still going through initial testing and will be formally submitted to NASCAR for approval this summer. A public unveiling of the finished product will follow.