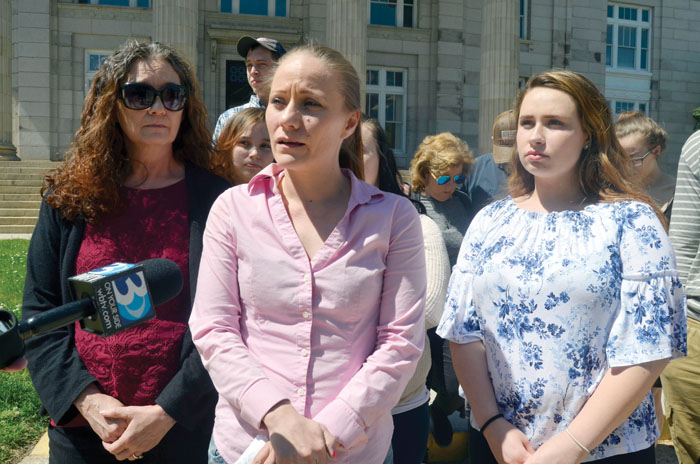 SALISBURY — A Salisbury man charged in the 2016 murder of a woman whose partially burned body was found beside a road pleaded guilty Tuesday in court.

Timothy Clarence Smith Jr., 32, had escaped on Saturday from a second-floor window of the jail. Authorities said he broke a window frame and used sheets in his escape. He was captured a few hours later.

On Tuesday, Smith, clothed in a red Rowan County Detention Center jumpsuit and shackled, appeared in Superior Court for a hearing. Extra deputies filled the courtroom.

Smith will spend the rest of his life in prison without parole. The charges for escaping the detention center and unrelated misdemeanor charges were dismissed.

Amanda Kay Smith’s body was found off Leonard Road in eastern Rowan County the same day that her mobile home at 245 Honeysuckle Lane was set on fire. A motorist spotted something suspicious on June 17, 2016, and called 911. The body of the 33-year-old was found in a wooded area on the roadside.

Authorities have said Amanda Smith and Timothy Smith are not related.

Timothy Smith and his then-girlfriend, Stephanie Dawn Hall, were both charged with first-degree murder and second-degree arson. They were arrested in Horry County, South Carolina, after law officers tried to stop them in a stolen car. The two wrecked the vehicle during the pursuit.

When police questioned Smith and Hall, they confessed to the murder, court documents showed.

Rowan County Assistant District Attorney Greg Butler said in court Tuesday that both Smith and Hall repeatedly struck Amanda Smith in the head and face. She had broken ribs and other blunt-force trauma to her upper body. She also was strangled.

Smith and Hall became worried and put her body in the trunk of their vehicle, then drove around until they made a plan.

Butler said the two stole money from Amanda Smith and tried to cover their tracks by burning her mobile home. They burned her body and dumped it on the side of the road. Butler said an autopsy showed that Amanda Smith was already dead before her body was burned.

“There are no words to tell you how much our family has suffered,” Linda Watson, Amanda Smith’s mother, said at Tuesday’s court hearing.

Watson, directing her comments partially to the court and mostly to Timothy Smith, said she wishes she had spoken with her daughter longer the last time they talked.

She said the image of how her daughter suffered in her final moments are forever etched in her thoughts.

“She was tossed on the side of the road like garbage and set on fire,” she said.

Watson said the family spends holidays at Amanda’s gravesite and, instead of happy family photos of her, they take pictures of the flowers on her grave.

Amanda Smith’s older sister, Amy French, also addressed the court and Timothy Smith. She noted the moments she and her sister will never have together and also read a poem.

“I hate that you used her caring, loving nature against her,” French said. “I hope you have trouble sleeping every single night.”

Amanda Smith’s daughter, Alexis Smith, spoke about how her mother would miss her wedding, the birth of her first child and other moments in her life and the lives of her younger brothers, who are 7 and 9.

“I wake up every morning and I think of my mom. I just want to hear her voice and hear her laugh,” Alexis said.

Timothy Smith’s attorney, Mike Adkins, told the court that his client has expressed remorse and regret about his role in the murder. Smith stood and turned to Amanda Smith’s family and told them he is sorry.

Timothy Smith said the reason he confessed is because he believed Stephanie Hall was pregnant with his child. He said when he tried to take back his confession, he was refused.

French said after the hearing that she and her family were not moved by his statements.

Stephanie Hall was brought into court after Timothy Smith’s hearing. Hall could be seen crying before the hearing. She had pleaded guilty at a previous hearing in March to arson and robbery charges and has been serving 1 and a half years to 2 and a half years in prison for each of those charges.

Hall also had pleaded guilty to murder. On Tuesday, she was sentenced to 21 to 27 years for second-degree murder, a sentence she will serve once the robbery and arson sentences are over.

Hall made no comments except to ask that her cellphone be returned. Judge Lori Hamilton said she could not get it back, but if there were images on it that she wanted her family to have, authorities could arrange that.

After the hearings, French said she’s glad that her family doesn’t have to return to court, but “it doesn’t make anything any better. It doesn’t make a difference. It’s still the same hurt, the same things we’re going to deal with day to day.”

She said she had met Timothy Smith and Hall the day before the murder when she picked up Amanda’s then 7-year-old son so he could spend time with the family for vacation. She didn’t know who they were at the time.

French said she and her sister used to write poems and send them to each other. It was something their mother taught them as a way to express their feelings. The family said they feel lucky to have some of the poems Amanda wrote.

French said anytime she can talk about her sister, she will do so.

“I don’t want nobody to forget. She doesn’t deserve to be forgotten about,” French said.