Leonard Pitts: This is not about Starbucks 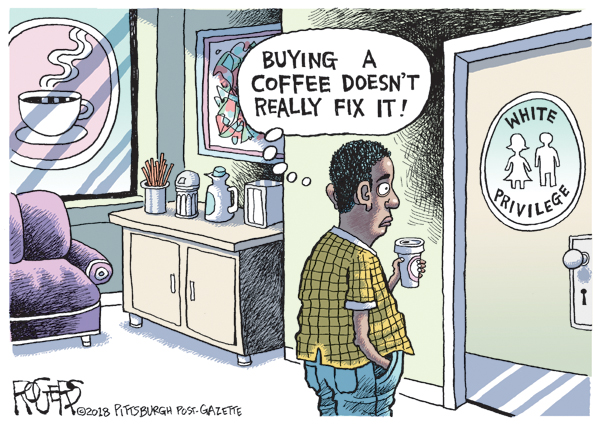 I don’t drink coffee, so I can’t boycott Starbucks. But I wouldn’t if I could.

Yes, I understand — and share — the national anger over viral video of last week’s arrest of two African-American men at one of the company’s Philadelphia stores. The men, who have yet to be identified, were reportedly doing nothing more threatening than waiting quietly to be joined by a man they were meeting there, having asked to use the restroom and been refused. Their waiting apparently scared the bejeezus out of the manager, who called police.

Video of the incident shows a white guy asking if the men are being arrested because “they were black guys, sitting there.”

But his facetiousness is misplaced because that’s exactly why they were arrested. On the video the white customers are upset, but the men accept it placidly, as befits veterans of the exhausting job of Being While Black.

Now Starbucks faces a public-relations nightmare as people swear off its lattes and macchiatos. Protesters have appeared at the Philadelphia store. “Starbucks Coffee is Anti-Black” they chanted. “Shame on Starbucks,” one sign declared.

But Starbucks isn’t the point.

To pretend it is is a comforting fiction. It allows the company to apologize, vow to do better and move on. It allows protesters to feel righteous at having proven they will not tolerate intolerance.

Meantime, we know as a statistical matter of fact that somewhere, a little boy was just suspended from school for a minor infraction because he is black.

A desperately ill woman was just denied sufficient medication to ease her pain because she is black.

A highly qualified applicant was just passed over for the job of her dreams because she is black.

And sometime soon, another unarmed man will be shot by police because he is black.

Most of it won’t make the news. If it does, we will treat it as we are now treating Starbucks — as an individual, albeit outrageous, story requiring good people to rise in protest. But these are not individual stories.

No, it’s all the same story.

The circumstances change, yes, but the story never does. Nor does the moral thereof: America is a nation still infected with the same idiocy that has bedeviled us since before Thomas Jefferson wrote those noble words he didn’t believe about all men being created equal. Now, as then, some of us think you can judge a person’s intentions and worth from the color of his skin.

So it’s useless to single out Starbucks for opprobrium. Granted, it may come out that it has a corporate culture of denigrating black customers, in which case, the company deserves all the opprobrium we can muster.

But what happened in Starbucks isn’t really about Starbucks. Nor are police shootings of unarmed black men really about police or the denial of palliative care to sick black people really about doctors. No, the story is all about us, about we the people and the truths we claim to hold self-evident but don’t.

Last week, the story unfolded at Starbucks. It could just as easily have been Red Lobster or McDonald’s. It still could. So to make this about Starbucks is to let the real culprit off the hook.

This is the coffee maker’s embarrassment, yes.

Leonard Pitts is a columnist for The Miami Herald.
Email him at lpitts@miamiherald.com.