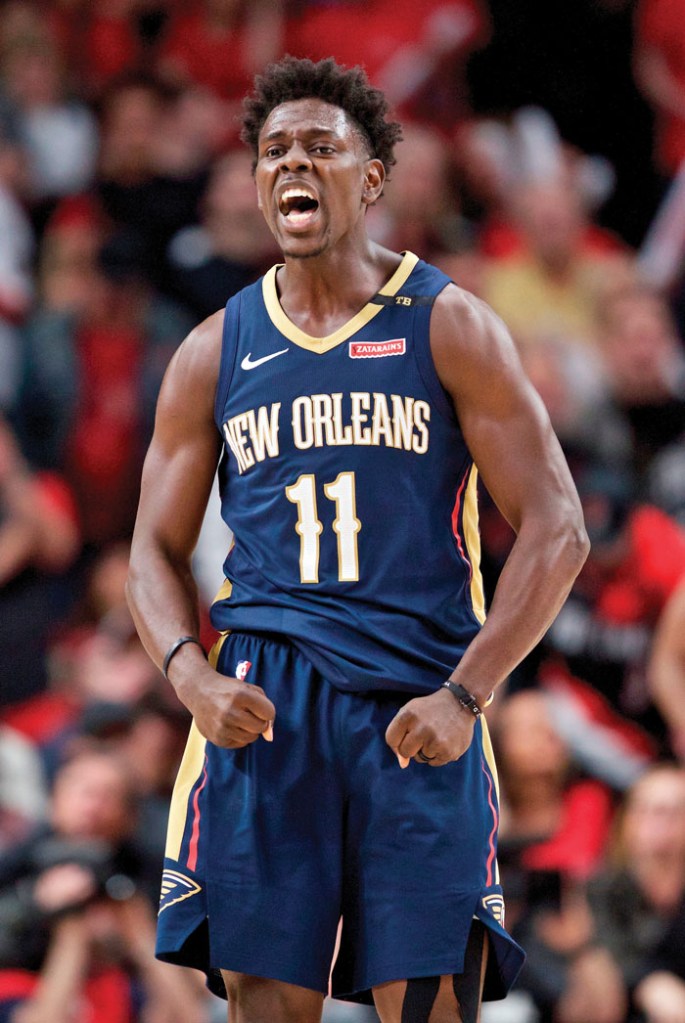 PORTLAND, Ore. (AP) — Jrue Holiday had a career playoff-high 33 points and the New Orleans Pelicans took a 2-0 lead in their first-round playoff series against the Portland Trail Blazers with a 111-102 victory on Tuesday night.
Rajon Rondo had 16 points, 10 rebounds and nine assists for the Pelicans, who host the Blazers on Thursday as the series shifts to New Orleans. Anthony Davis added 22 points and 13 rebounds.
CJ McCollum, who struggled with backcourt teammate Damian Lillard in the opener, rebounded with 22 points to lead the Blazers.
Portland trailed by as many as 11 points in the third quarter but Lillard hit a 3-pointer and added a free throw to tie the game at 93 with 7:31 left. Holiday’s pull-up jumper and Rondo’s driving layup kept the Blazers from pulling ahead.
Maurice Harkless dunked and Al-Farouq Aminu had a layup to re-tie the game at 97. After Holiday’s hook shot, Harkless made a 3-pointer to give Portland a 100-99 lead, but it was short-lived.
CELTICS 120, BUCKS 106
BOSTON (AP) — Jaylen Brown had a playoff career-high 30 points and the Celtics pulled away into second half to earn a win over the Bucks.
Terry Rozier added 23 points for Boston, which took a 2-0 series lead in the first-round matchup. Game 3 is set for Friday in Milwaukee.
The Celtics led by as many as 20 in the fourth quarter.
Milwaukee got as close as 107-97 with 4:13 to play. But the Celtics responded with an 11-2 run, capped by a banked in 3-pointer by Brown to push their lead back up to 118-99.
Giannis Antetokounmpo finished with 30 points, nine rebounds and eight assists. Khris Middleton added 25 points.
Turnovers were an issue for the second straight game for Milwaukee. The Bucks finished with 15, leading to 21 Boston points. They also shot just 41 percent from the free-throw line (7 of 17).
RAPTORS 130, WIZARDS 119
TORONTO (AP) — DeMar DeRozan matched his career playoff-high with 37 points, Jonas Valanciunas had 19 points and 14 rebounds and the Raptors beat the Wizards, taking a 2-0 lead in a playoff series for the first time in franchise history.
Kyle Lowry had 13 points and a career playoff-high 12 assists as Toronto set team playoff records for points in a quarter, a half, and a game.
C.J. Miles scored 18 points, Delon Wright had 11 and Serge Ibaka 10 for the Raptors, who snapped an NBA-worst 10-game losing streak in Game 1s with a 114-106 win on Saturday.
Toronto, which made a team playoff record 16 3-pointers Saturday, connected on 12 of 32 from long range in Game 2, making only one in the second half.
John Wall scored 29 points, Mike Scott had 20 and Ty Lawson 14 for the Wizards, who host Game 3 on Friday night.