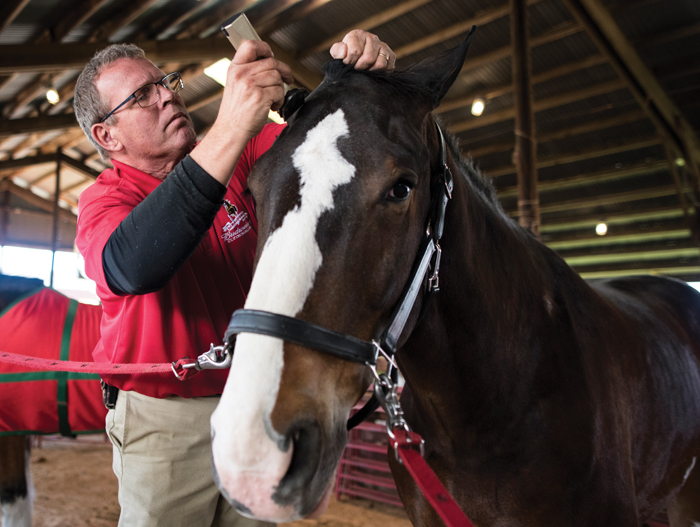 Larry Manypenny trims Ivan's, a Budweiser Clydesdale, hair on April 17, 2018. Manypenny says it can take anywhere from 20 minutes to an hour to cut Ivan's hair. (Photo by Rebecca Benson)

The big draft horses — Budweiser’s East Coast team of Bandit, Ivan, Master, Jack, Royal, Larussa, Phoenix, Hansi, Jade and Merlin — are staying at the fairgrounds this week while they prepare for some Food Lion corporate events Thursday and Friday.

The Clydesdales will shy away from their normal limelight otherwise. They won’t be making any public appearances before heading for Florence, South Carolina, next week, so don’t go to the fairgrounds expecting to get a good look at the horses.

Before Salisbury, the East Coast hitch team made its annual appearance at the Keeneland racetrack in Lexington, Kentucky. A seven-member crew accompanies the horses, and they’re on the road about 46 weeks out of the year.

They travel in tractor-trailer rigs that can accommodate all the handlers, horses, harnesses and the iconic Budweiser beer wagon. The current entourage also includes two Dalmatians — Barley and a 13-week-old pup named Merri, short for Merrimack, New Hampshire, the East Coast team’s home base.

Tuesday afternoon, Clydesdale handler Shelby McCoy was giving one of the lead horses, Bandit, his once-a-week trim with electric clippers. The horses also get a full bath weekly with shampoo and conditioner, in addition to the cleaning, brushing, feeding, training and exercising needed daily.

A typical Clydesdale eats 40 to 50 pounds of timothy hay a day and 1 to 10 pounds of grain, depending on his metabolism. A Clydesdale will drink about 30 gallons of water daily.

The horses are strong. The harnesses and collars for pulling the wagon weigh 130 pounds each. It’s said they can pull a 1-ton load at 5 mph.

To any casual observer, Clydesdales seem like easy-going, patient and tolerant beasts — and that’s true for the most part. “They’re pretty calm and laid back — good for being out in public because you don’t know what will happen,” McCoy said.

The handlers who are around them every day become deeply devoted, of course.

“Each horse is a little bit different — a wide range of personalities, I think,” McCoy said. “Each crew member connects with different horses. Ivan is my favorite.”

Ivan is another of the lead horses. The typical Budweiser beer wagon team is made up of eight horses — four rows, two abreast — and the biggest of these big horses are closest to the wagon and driver.

These wheel horses are followed, in order, by body horses, swing horses and the leads.

Bandit, the lead horse McCoy was grooming Tuesday, is 7 years old and by now is pretty experienced, she said. Bandit has been to Mardi Gras and the World Series “and New York City a couple of times,” McCoy said.

To qualify for the Budweiser team, a Clydesdale must be a gelding, at least 4 years old, 6 feet or more at the shoulders, 1,800 to 2,300 pounds, bay in color, white markings on the face, and a black mane and tail.

They also are distinguished by the long hairs on their lower legs — the substantial white feathering that covers the hooves.

Budweiser hitch teams — there are several in the country that tour and others that stay in official homes in St. Louis or Merrimack — make hundreds of public appearances and are used for promotions and television commercials.

The breed was developed for farm work in Clydesdale, Scotland, more than 300 years ago. Clydesdales first became associated with Budweiser in 1933 after the repeal of Prohibition, and the horses have become a symbol for the brewer, especially in the age of television.

The Clydesdales have taken part in two presidential inaugural parades — in 1949 for President Truman and 1993 for President Clinton.

Dalmatians became part of the hitch teams in 1950.

McCoy and all the other members of the team can drive the big rigs that transport the horses from city to city. She grew up with quarter horses in Missouri and said working with the Budweiser Clydesdale hitch team is “really a good opportunity to see the country.”