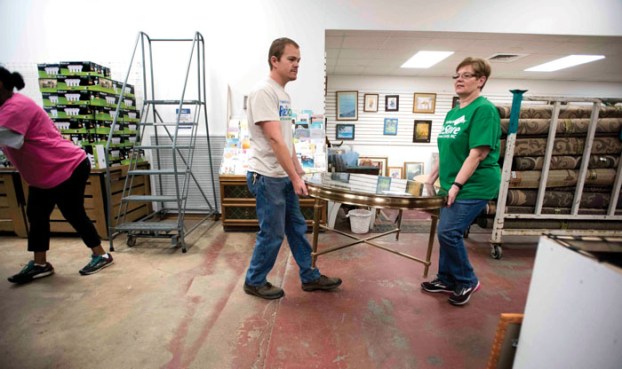 Nate Wrights and Sue Gajewski carry a round class top table on to the sales floor. The local Habitat for Humanity ReStore in Salisbury. Jon C. Lakey/Salisbury Post

Light bulbs, high-end furniture — just some of the things flying out of Habitat’s ReStore

Earth Day Celebration at the ReStore

What: A celebration of Earth Day

Food and refreshments: The Rustic Roots food truck will sell its farm-to-fork menu items at lunch both days, and the Cheerwine trailer will be on location serving free Cheerwine both days.

Duke Energy representatives will be on hand all day Friday to talk with ReStore visitors about energy-saving LED bulbs and fixtures, which are sold in the store.

Rockwell Farms will provide plants and flowers for sale both days.

SALISBURY — There are some amazing things you should know about the Habitat for Humanity ReStore at 1707 S. Main St., but start with these three.

They deal with light bulbs, furniture and rugs:

• ReStore sells more than 6,000 light bulbs a month. Duke Energy provides the new MaxLite LED bulbs, priced at $1.99 and under. This includes regular lamp lights to outdoor yard lights. The store also has LED fixtures — indoor and outdoor — for $3.99.

Shipments come in almost weekly, and ReStore sends out text alerts (text ReStore to 797979) and posts photographs of each new shipment on its Facebook page.

“It flies out of here, once we unload,” Brady says.

That department store, whose name is familiar to most consumers, asks not to be identified for purposes of this story, but regular ReStore patrons know which retailer it is.

“We have customers from all over North Carolina, South Carolina and Georgia,” Brady says. “We have one customer from Chicago, Illinois. Her sister lives here and picks up for her, and then they ship it in an 18-wheeler.”

• Need a rug? ReStore sells about 100 a week. “Most of our merchandise is donated,” Brady says. “However, we purchase the new rugs that we sell from California.”

What it all means is that the ReStore has become a significant source of income for the local Habitat’s housing ministry, an effort that has built 125 homes to date.

“If you haven’t been to the ReStore lately,” Brady says, “it’s definitely worth checking out.”

ReStore will have its first-ever Earth Day Celebration on Friday and Saturday. (See information box.) A Duke Energy employee will be on hand all day Friday to talk with customers about the energy-saving benefits of LED bulbs.

Duke Energy provides the light bulbs at no cost to Habitat for Humanity, as long as they are sold at the price it sets.

As for the high-end furniture being sold, the shipments represent returns or slightly damaged items that the retailer no longer wants to sell in its stores. ReStore sells them at 75 to 90 percent of the original retail price, which is shown on in-store tags.

The furniture might include things such as luxurious mirrors, consoles, bar stools, headboards, chests, cabinets, mantels, sofas, buffets and vanities.

It’s the kind of stuff you might not expect in a Habitat store.

“We definitely need more retail space,” Brady says. “It has created a challenge of getting everything in the store, (but) it’s a wonderful problem to have.”

The major corporate donations do not mean ReStore no longer accepts donations of goods from local individuals and businesses. Nate Wrights of the Habitat staff stays busy picking up things around Rowan County.

Executive Director Coleman Emerson says the local ReStore does a good job of recycling and keeping things out of the landfill. What doesn’t sell often goes in free bins. And Habitat follows hard-and-fast policies of what it accepts and what it doesn’t.

The light bulbs and high-end furniture represent a 100 percent profit for the store.

Items on the sales floor are dated, and once something has been for sale 30 days, it usually is marked down 25 percent.

The store has shoppers that come in regularly to see what’s new. John Garrison says he and his wife, Mona, visit about three times a week, and he’ll go fishing the other days.

Mona is usually lost among the furniture, while John says he sometimes finds something he wants in the men’s section. On this particular day, he was checking out some of the LED bulbs and fixtures.

The Garrisons leave later with a bench that Mona thinks will make an attractive porch addition to hold plants.

The ReStore is 20,000 square feet, of which 12,000 is devoted to retail floor space. It relies on three full-time and two part-time employees. It also has three senior adults employed through a federally funded program.

Otherwise, ReStore depends on about 80 volunteers who work four-hour shifts — from 9 a.m. to 1 p.m. or 1 to 5 p.m. Some of the workers can be people working off court-ordered community service hours or students trying to meet their community service obligations.

Sharon and Scott Miller volunteer together for a shift once a week.

“We love it,” Scott says. “It’s a great organization.”

They might find themselves doing just about anything — from pricing items, to putting together furniture, to organizing cabinet pulls.

ReStore presently has thousands of cabinet pulls to choose from for 50 cents each.

“It’s a lot of fun,” Vanessa Logan says of working at ReStore. “Every day, there’s something new.”

Logan is one of the federally funded senior workers. She receives minimum wage for working 20 hours a week and has been at ReStore about three years.

“She can do about anything in the store,” Brady says, and the same can be said for Barbara Dudley and customer service supervisor Sue Gajewski.

Theresa Dishman and Nyasja Everhart are among the loyal volunteers. Everhart, a student at Rowan-Cabarrus Community College, said she visited ReStore one day, appreciated the friendliness of everyone and decided she wanted to be a part of it.

And there’s always something exciting coming in, Brady says. This week, she expects six pallets of desk lamps (with USB ports) that will sell for $1.99 each.

Another amazing thing worth checking out.

Volunteer Week: For Historic Salisbury Foundation, Black and his brigade are always at the ready

SALISBURY — For Doug Black, this is what he considers slowing down. Monday morning, the longtime volunteer for Historic Salisbury... read more