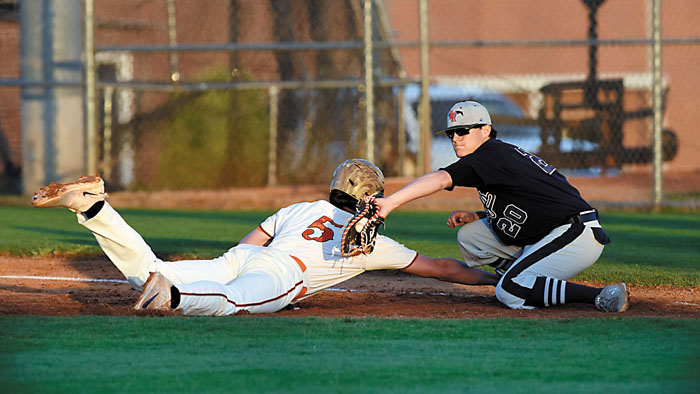 With one suitable-for-framing performance, the tall left-hander humbled the pro prospect and pitched visiting East Rowan back into the North Piedmont Conference race.

“I really didn’t think too much about the scouts behind the plate,” Setzer said, moments after his complete-game, 1-0 victory pushed the Mustangs within a game of the league-leaders. “I figured they were here because Owen’s such a great pitcher, but I didn’t let it effect me. I just went out and pitched.”

He pitched extraordinarily well, scattering four singles, fanning nine Carson batters and helping East (13-5, 5-2) prevail for the seventh time in its last eight games. Setzer threw seven innings of thoughtful, precise patterns. His fastball was plus-plus — swift and alive — and his curve swept across the inside corner to right-handed hitters, often bathed in dirt and more often missing barrels.

“He really trusted himself tonight,” said East catcher Trevor Scruggs. “Especially on 3-2 curveballs. He didn’t think about it too much. He just threw it and knew it would do what it’s supposed to do. After our last game (Friday’s 5-3 loss at West Rowan), we had to show something. We had to bounce back. Hayden and all of us, we live for games like this.”

This one was significant for a few reasons. First-place Carson (15-5, 6-1) hadn’t lost a conference game nor been shut out this season. White — the right-hander with a graceful, swan-like delivery and that venomous, low-90s fastball — hadn’t lost at all, nor allowed an earned run before last night.

“Can’t make excuses,” he said after collecting 10 strikeouts and yielding four hits in a sturdy, seven-inning effort. “You’ve got to take a loss every once in a while to bring you back down. It always hurts to lose, but (Setzer) pitched with all the confidence in the world.”

“This was two great pitchers going at it,” said Carson coach Chris Cauble. “Their pitcher was just a little better tonight.”

Of course, the pitcher’s job is to throw fastballs, not hit them. But Setzer — a dangerous, .413 batsman — opened the game with a tell-tale double to left-center field.

“Once I got ahead in the count,” he said with a sideways glance, “I knew I would get something hittable.”

It was a meaty, 2-0 fastball that White threw across the heart of the plate. “Right down the middle,” he shrugged afterward. “I was more focused on getting my footing on the mound. That’s not an excuse. You still have to pound the zone, but the hitter did his job.”

“Mize did a great job there,” said winning coach Brian Hightower. “With a runner on third and nobody out, all I really wanted him to do was put the ball in play. He’s been a big guy for us all year.”

Carson had at least two opportunities to score. It put a runner on second base in the last of the fourth inning when Maddux Holshouser bounced a two-out single up the middle and advanced on a wild pitch. The rally fizzled when CP Pyle went down swinging.

An inning later Cole Hales legged out an infield hit to the right side and continued to second on a throwing error. He got as far as third base on Garrett Alewine’s sac bunt, but was stranded when Setzer retired Cam Prugh on an inning-ending fielder’s choice.

The rest was up to Setzer, who stymied Carson’s last seven batters. In the last of the seventh he fanned Pyle on a 3-2 fastball, got Hales to sky to right and induced Alewine to swing through a game-ending fastball. With it, the Mustangs avenged last month’s 4-0 loss to Carson and White, snapped the Cougars’ four-game winning streak and reappeared on the NPC radar screen.

“Definitely, don’t count us out,” said Scruggs. “That’s one thing you don’t want to do.”

NOTES: Setzer’s double on the game’s third pitch was the only extra-base hit. … Mize, a sophomore outfielder, picked up his team-leading 25th RBI. … Each team turned a double play in the first inning. … Carson plays a non-league match at Cox Mill today and visits Statesville on Friday. East hosts South Iredell on Friday.