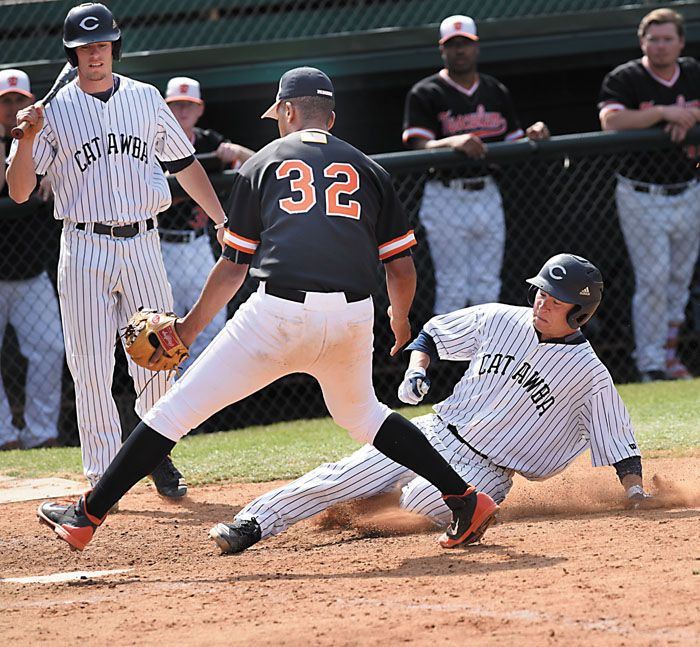 SALISBURY — There are more than 2 million Smiths in the United States. The Catawba College baseball record book is full of them.

Kim Smith is in that book for swatting a grand slam back in the 1970s.

Senior left fielder Kyle Smith is continuing a tradition of exceptional Smiths at Catawba, although he’s never gotten much acclaim. That’s because he’s been in lineups where it’s been easy for a steady guy named Smith to be overlooked. He played with spectacular draft picks Will Albertson and Zac Almond and now he plays with classmates Luke Setzer and Chance Bowden, local icons who will finish their careers as two of the best hitters in Catawba history.

“Playing here for four years has been a great experience,” Kyle said. “All the success we’ve had, the championships we’ve won, I’ll treasure it.”

Kyle is going to leave his own mark in the school record book. With career totals of 176 runs, 227 hits and 47 doubles, he’s going to be in the all-time top 15 in at least three categories. His career batting average is .340, which puts him on the edge of the top 20 ever to play for the Indians.

As a freshman in 2015, on a team where the marquee guys were Albertson and seventh-round draft pick Craig Brooks, Smith played a significant role. In the Division II World Series in Cary against Cal Pomona, Smith had three hits in the win that put Catawba in the national championship game. He scored Catawba’s first run after beating out an infield hit. He added a tie-breaking single in the fifth inning.

A lefty swinger, Smith sat down quite a bit against southpaws as a sophomore. That was the only time in his career he wasn’t in the lineup all the time.

“Fortunately, we’ve got a pitching machine that throws lefty curveballs,” Smith said. “I’ve put a lot of work in to be able to hit the left-handers and I got some good experience playing in the Coastal Plain League with the Asheboro Copperheads.”

Smith was a high school shortstop at Grimsley High in Greensboro. It clicked there for him his senior year when he doubled his batting average and became a .400 hitter.

He had the opportunity to play American Legion ball for coach Ronnie Pugh and Randolph County Post 45. Randolph annually hosts the Southeast Regional Tournament, so Smith got to compete in three pressure-packed regional finals.

Jim Gantt, Catawba’s head coach, coaches the Rowan County American Legion team during the summer months. Randolph is Rowan’s biggest rival these days, but it’s been a rivalry based on respect not animosity. Gantt has benefited from a train of outstanding Randolph players in recent years — including Dylan Richardson, Albertson, Smith and current Catawba starting catcher Cameron Morrison.

“I saw Kyle in Legion and liked him a lot,” Gantt said. “Good athlete, good swing, and he could play infield or outfield.”

Catawba has used Smith at a lot of places on the field and in a lot of different spots in the lineup. He’s been fine at third base and second base for the Indians, but Catawba eventually needed him more in the outfield.

“He’s best suited for the outfield because of his speed and arm, but he’s never questioned it when we’ve needed him in the infield,” Gantt said.

Smith had a big season as a junior, hitting .345 with eight homers and 16 doubles. He was second team All-SAC.

As a senior he’s had his best year, although things didn’t start smoothly any of the Indians who kicked things off with a winless Florida trip and were 3-9 after a home loss to Shippensburg on Feb. 18.

“He’s turned out to be great leadoff hitter,” said Bowden, who is one of Smith’s roommates.

Smith’s name was on Gantt’s lineup card in a variety of places in the early going — sixth, fifth, fourth, second — but Gantt penciled him in at leadoff for the Feb. 23 game against Coker.

“We figured we try it,” Gantt said. “There’s always the potential that he’ll start the game with a home run.”

Smith walked in his first leadoff at-bat, but he had an incredible series against the Cobras, going for 9-for-15 with 11 RBIs. Nearly two months later, Smith is still entrenched as the leadoff man. That’s something Gantt hasn’t had to worry about.

“I’ve never really cared what position I played or where I batted in the lineup, as long as I was in there somewhere,” Smith said. “I like leading off, trying to set the tone at the start of a game. And I’ve still got freedom to swing.”

Smith is definitely a hitter. He’s batting .370 and he’s second in the Division II with 22 doubles. But he’s also selective enough to lead off. His 30 walks have rubbed off on an unusually patient lineup. Third baseman Jackson Raper and shortstop Jacob Nester have 33 walks apiece, and Catawba leads Division II in drawing walks. The Indians are ninth nationally in on-base percentage.

Catawba played a wild, desperate doubleheader at Newman Park on Saturday against Lincoln Memorial. After losing the first game, 9-8, Catawba was struggling in a 12-all tie in the final inning of regulation in Game 2. Fortunately, the Indians had the right guy at the plate leading off. Smith’s double to the right-center gap on a 3-2 pitch, his third double of the game, was one of the bigger swings of the season. Eventually he scored the winning run on Raper’s two-out, walk-off double.

While it hasn’t enjoyed a great season by the lofty standard set by the program, Catawba (24-20, 17-7) still has managed a surge to the top of the SAC and will take a one-game lead into a weekend series at second-place Wingate that will decide the regular-season race.

Besides playing in the World Series in 2015, Smith played on Catawba teams that made the Southeast Regional in 2016 and 2017. If his last team is going to make the regional, it’s going to have to win the SAC tournament that will be played  in Kodak, Tenn., on April 26-30.

“Everyone understands that,” Smith said. “We’ve been working hard to win it. We’ll be prepared to win it.”

Even as a senior, Smith is famously quiet. Setzer calls him “The Silent Assassin.”

But Smith has always aced the classroom, and Gantt said he surprised and wowed folks recently with a sharp oral presentation.

“He’s a quiet guy, but he’s really smart guy who just listens more than he talks,” Gantt said. “He’s given us a lot of pluses for four years. He’s been as important to our success as anybody.”

Catawba plays a non-conference game today against Barton at Newman Park at 6 p.m.