“We’re all in this together”: local mayors look to form I-85 development cohort 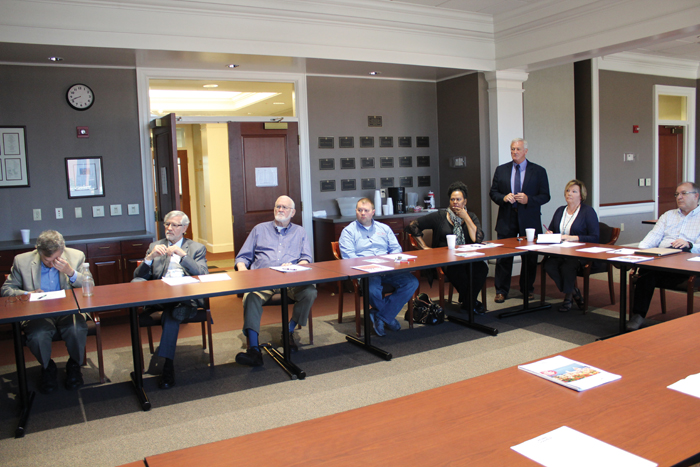 Discussed changes are coming due to the widening of Interstate 85 and the new interchange off of Old Beatty Ford Road. Bill Wagoner, with the chamber, called the interchange “an opportunity to fill in a blank.”

Wagoner said that there needed to be careful planning on how the land around the new interchange was developed. No one wanted it to become a path through residential rooftops when it could be an economic driver for the community, he said.

“We believe that the single greatest economic development asset that we have in Rowan County is that we’ve got an absolute economic pipeline … called I-85,” he said.

Potential businesses would be looking at drive times for both personnel and product, said Wagoner.

“Transportation is what everybody is looking at in the manufacturing world,” he said. “… Getting people their products quickly is the single most important locational factor.”

But there was a catch, he said: “the land around the interstate is there only once.”

Wagoner tasked municipal mayors to create a multijurisdictional, co-sponsored group whose focus would be optimize the economic benefits of Rowan County for the benefits of all, not just individual municipalities.

“Right now, there is no focused, organized methodology and group that is today attempting to say ‘I-85 is such an 800-pound gorilla of an asset that we need to have energy put into that constantly,” said Wagoner.

The goal, Wagoner said, was to ensure that the tax base per capita increased faster than the population does.

“Without that growing, the community suffers economically,” he said.

Municipal elected officials in attendance all spoke in favor of forming the group, a faction that would evaluate projects over a certain, to-be-determined threshold of magnitude and impact. These appointed individuals would study and present findings on possible developments.

The group would also act to lead marketing and policies on how land around the interstate can be developed, from land use planning to water and sewer to subdivision development ordinances and more, said Wagoner.

Appointees are yet to-be-determined.

“I can even see bringing our mayor pro tems in on this so we can have a broader think tank,” she said, a nod to Salisbury mayor pro tem David Post, also in attendance. “I can only see how this can help our county.”

“We’re probably one of the furthest away from this corridor,” he said. “But, when this fills up, where’s it going? It’s coming to Rockwell. We already have a new home development coming. This will fill it up.”

Taylor said that, overall, it would be foolish for the town not to be a part of the proposed collaborative.

Bill Feather, mayor of Granite Quarry, spoke of experience in the town where a similar group would have been beneficial: the Gildan facility.

Agreements and annexation changes would put the planned facility outside the town’s borders, shorting the community of a projected $300,000, said Feather. A big impact on a $2 million budget, he said.

Fortunately, Feather said the facility did bring aforementioned rooftops to the town, and a new industrial park is coming to fruition. But the houses aren’t bringing the desired tax base increase that Wagoner mentioned, said Feather.

Brandon Linn, mayor pro tem of China Grove, said both China Grove and Landis would be more than happy to collaborate in the undertaking.

“We being on the south end have felt for some time that we’ve been the redheaded stepchild,” he said. “We felt like we didn’t have a voice because we weren’t getting things. … For us to be a part of this would be excellent.”

Jim Gobbel, the mayor of Spencer, called the countywide collaboration a “golden opportunity.”

He said he’d often wondered why municipalities in the county have acted as small, isolated islands.

“As one big island, you can get a heck of a lot more done,” said Gobbel. “… We’re all in this together.”