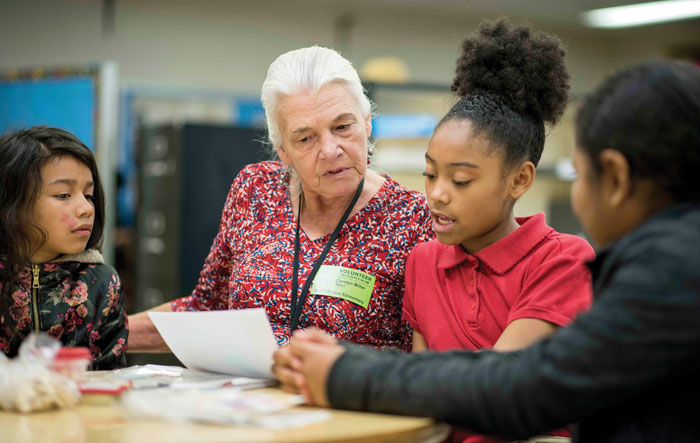 SPENCER — Carolyn Miller puts on sparkles and soft colors each day before she heads to school. At 72, Miller said she doesn’t wear much makeup, but the kids she works with love to catch a hint of sparkle and shine on her eyelids.

Miller has worked as a volunteer tutor with Communities in Schools for the past three years, and has become one of the agency’s most dedicated volunteers. Three days a week, Miller goes to North Rowan Elementary, North Rowan Middle and Henderson High School to help students with math, reading and homework.

“It’s a wonderful, wonderful experience for me. I see their successes,” she said.

Miller said she decided to volunteer after moving to Rowan County from upstate New York back in 2014 to be closer to family. A retired healthcare worker, Miller had always tried to volunteer, and the move left her with an itch to scratch.

“I was so lonely,” she recalled.

It was Miller’s daughter-in-law who suggested Communities in Schools; and after doing some research, Miller said she felt like it would be a good fit.

“I love these kids like I cannot tell you,” she said.

Working with both North Elementary and North Middle gives her a unique opportunity to work with students for far longer than normal. In fact, one student compared Miller to the story of the old woman who lived in the shoe.

“You have so many children, but you just keep getting more!” He told her.

While Miller coaches students in academics, to her, tutoring is so much more. It’s a one-on-one time with a child that gives her an opportunity to mentor, encourage and really listen to the issues and concerns of each child.

“A tutor has such a unique opportunity,” she said.

“It has given back to me a thousand, thousand times over,” she said.

Miller said she loves the kids she works with — even when they’re having bad days. When students tell her they want to quit school, or to quit her tutoring sessions, she tells it to them straight.

“I tell students, you wanna quit? Fine, quit — but I’m not quitting,” she said.

Whether or not they show up for scheduled sessions, Miller is there, waiting each week without fail. She said she refuses to give up on her students — for her, it’s a calling.

Those interested in volunteering with Communities in Schools should visit www.cisrowan.org.