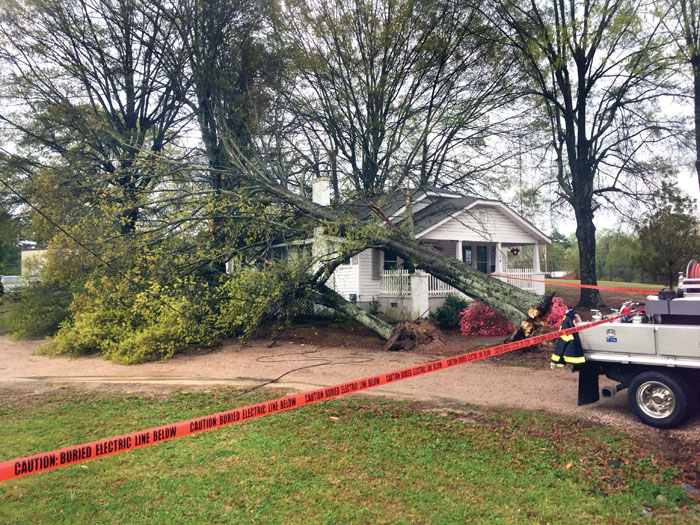 Andie Foley / Salisbury Post Two trees fell on this home in the 700 block of West Ryder Road in Landis around 4 p.m. on Sunday as strong storms moved through the area.

The service identified a storm four miles southwest of Huntersville, which was moving northeast at 50 mph. Residents of Kannapolis and Salisbury were warned of potential 60 mph-wind gusts and quarter-size hail.

Half an hour later, residents of Landis would feel the effects, as two trees fell on a home in the 700 block of West Ryder Road around 4 p.m.

Ian Correll, 25, was in the house with his girlfriend, Shayna Barkley, and 8-year-old daughter Brooklyn Correll when the trees fell. No one was hurt.

He said that when the tree struck, the three were unsure of what had happened.

“I just stepped out the door. I thought I heard it but I also thought it was rain,” he said. “… I thought maybe the bottom had just fell out.”

Barkley said they were in a back bedroom. The tree fell across the front two rooms of the house — the kitchen and living room.

Damage was minimal, though the trees would take down a power line. First responders on scene disconnected the home’s gas as a precautionary measure.

Barkley said that water was leaking into the living room, but no holes were visible in the 80-year-old home’s ceiling.

Rowan’s Red Cross chief, Daniel Michael, said at the time of the event it was the only fallen tree to cause significant, displacing damage in the county.

He said that tree had likely fallen from wind rather than a tornado, which had been reported in Mount Holly.

“In Mooresville, (the storm) … was more just straight line winds. Those were between 85 and 90 miles an hour.”

The home was owned by Ian Correll’s grandmother B.J. Watts, who passed away in 2007. His mother, Cindy Correll, also lives in the home.

She was not at home when the incident occurred.

“I lived in Florida for many years, but this has always been a homeplace to me,” she said.

Mia Watts, Cindy Correll’s sister, said that she felt B.J. Watts was looking out for all in the situation.

“Mama in heaven was watching over y’all, because that tree could have went straight across that house,” she said. “… But it could have been a lot worse. We’re very fortunate that nobody was hurt and it didn’t go a different direction and get the house, the whole house.”

Barkley agreed: She said she’d only just returned from the store and felt something telling her not to park under the trees.

For now, the Corrells and Barkley have been evacuated from the home. The Red Cross will offer the family assistance with shelter, food, clothing and other necessities in the interim, said representative Christy Hamilton.

Strong storms moved through the area on Sunday, bringing rains and high winds. According to Steve Monday with Rowan County Weather, the maximum recorded wind gust at the weather center in Atwell was 44 mph, and the average wind speed was 20 mph.

As of 8 p.m., rainfall was measured at 0.85 inches and rain was still falling. Monday said trees were also reported down in Cleveland, Atwell, Kannapolis and China Grove.