Golf tournament for visually impaired a hole in one 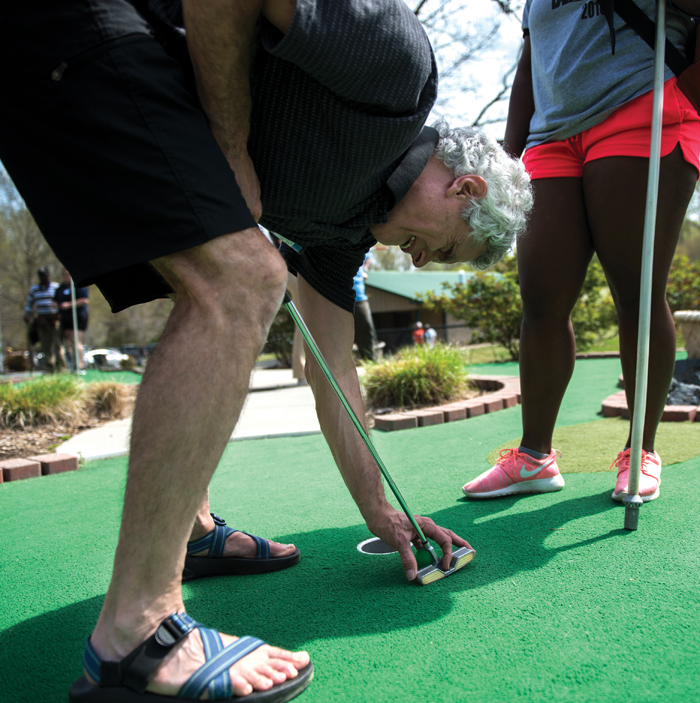 Jesse Smith measures the length of his putter with his hand at the 30th annual VIP Mini Golf Tournament for the visually impaired on April 14, 2018. (Photo by Rebecca Benson)

SALISBURY — Jesse Smith kneels on the golf green, carefully using his club to measure the distance between a bright green golf ball and the hole’s brick border.

Roselyn Perkins, a senior at Catawba, stands nearby, waiting.

With careful words, Perkins tells him which direction to aim, and how hard to hit.

It’s a scene that played out all across the mini-golf course at Dan Nicholas Park as Rowan County Parks and Recreation’s Therapeutic Recreation department hosted the 30th annual Visually Impaired Miniature Golf Tournament. It’s one of the department’s biggest events all year, Supervisor Vernice Gallon said.

“It’s a wonderful event. …It’s an extraordinary event, because once a year people come from all over North Carolina,” she said.

More than 70 participants traveled from 15 North Carolina counties to take part in Saturday’s event — some traveling from as far away as Mitchell or Halifax counties.

Smith comes down each year from Avery County to participate — and he says there’s no comparison.

“There are three jewels in the crown of blind events in North Carolina,” he said.

There’s a fishing tournament each year on the Outer Banks, a summer event at Camp Dogwood and Rowan County’s golf tournament. But the mini-golf tournament holds a special place in his heart.

Smith travels down with a group from Yancey, Avery and Mitchell counties, and they come down the day before the tournament to practice and partake of Salisbury hospitality. When asked what keeps him coming back, he said “It’s got to be the people.”

Each participant was guided by a volunteer — many students from an adaptive physical education class at Catawba College — who told them where and how hard to hit, or helped walk them around the course so that they could feel its dips and slopes with their feet.

It was Perkins’ first year volunteering, but she said she would definitely want to help out again next year.

“It’s been a great experience,” she said.

But other volunteers are tournament veterans.

Renita Ritchie has been involved in the tournament since 1985 — back then, she was supervisor of the Therapeutic Recreation Department. But when she retired in 2013, Ritchie decided to stay on as a volunteer.

On Saturday, her partner was Sharon Weddington, who remembers back 30 years ago when the mini-golf tournament began in 1983. She’s tried not to miss a year.

“I started back when I could see some,” Weddington said. “So I’ve played every course in Rowan County.”

Back then, the tournament was small, and held at a mini-golf course near the West End Plaza in Salisbury. Weddington chuckled as she recalled that Summersett Funeral Home used to lend a tent for shade, and that organizers went to Gary’s Barbecue for “whatever food he would give ‘em.”

“It was a Beverly Hillbillies on steroids,” she said.

Things have changed a lot since then, and the tournament has lots of community supporters. But Weddington and others say it’s always served as a gathering place for blind and visually impaired folk.

“When I went blind they said there was nothing to do for blind people,” Weddington recalls.

But the tournament — and the Therapeutic Recreation Department — have proved those naysayers wrong. According to Gallon, the event is one of “fun and fellowship,” and participants enjoy both the competition and getting to spend time with old friends. Nothing deters the tournament, not even weather.

And the competition gets fierce. Participants play 36 holes with the help of a guide, and at the end scores are tallied and trophies awarded.

“They want to have fun and fellowship but they also want to win,” Gallon said. “So as soon as they finish their first round they’re looking at the scoreboard.”

But the tournament is also an empowering thing for those who are visually impaired, Weddington said.

“It’s another way for blind people to prove they can do everything they want to do if they have the proper tools,” she said. “My tools are my ball, my club and my guide.”

For more information about the VIP Mini Golf Tournament or the Therapeutic Recreation Department visit www.rowancountync.gov/527/Therapeutic-Recreation-Division

“We’re all in this together”: local mayors look to…