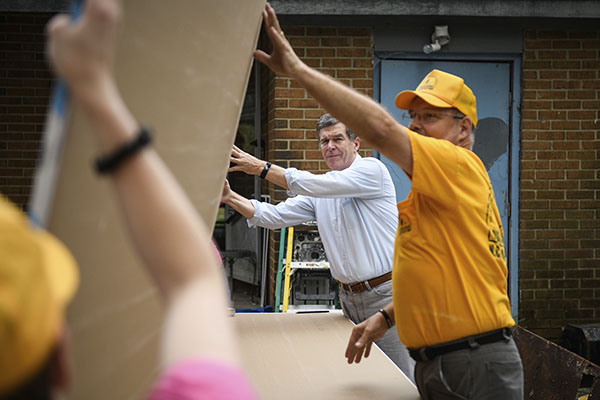 SEVEN SPRINGS — Most of North Carolina seems to have forgotten about Hurricane Matthew. It’s been about 18 months since the floodwaters ravaged Eastern North Carolina towns, and the news cycle has long since moved on to other natural disasters and the 10,000 political controversies in Washington.

One might think 18 months is plenty of time for residents and businesses to rebuild and go back to normal. But a walk through the tiny Wayne County town of Seven Springs shows that recovery is still elusive. One storefront still looks like it was bashed in by a truck, and a restaurant and bank remain vacant shells.

Some houses still have campers parked out back — cramped homes for residents while they await repairs. Across the state, only 46 people are still using FEMA mobile homes, but plenty of others are living in temporary rental housing or with relatives while awaiting federal funds to rebuild their homes.

Seven Springs town commissioner Ronda Hughes told me only half of the pre-storm population of 100 has returned, and it’s unclear how many more will come back. Some will wait months more to find out if FEMA will buy out their property or help them elevate houses.

Politicians frequently announce more Hurricane Matthew funding — including $168 million in federal grants announced last week. But the cash has been slow to flow to the people who desperately need it.

The funding seems to be tied up in layers of red tape thicker than the nasty sludge left behind by Matthew’s floodwaters. WBTV in Charlotte recently reported that North Carolina hasn’t yet spent a single dollar of a $236 million federal award announced last fall.

“Staff are working with applicants to ensure applications are completed quickly, and we expect the first participants to receive assistance next month,” N.C. Emergency Management spokeswoman Julia Jarema explained.

Republicans seized on the WBTV report as a chance to bash Gov. Roy Cooper, the Democrat whose administration oversees Emergency Management. “Cooper is either incompetent or he’s sitting on the funds until closer to the November elections, using storm victims as political pawns,” tweeted Rep. Destin Hall, R-Caldwell. “Release the funds now!”

Hall’s right to be concerned about the slow pace of recovery, but the legislature also bears responsibility. If state agencies are taking too long to process applications, lawmakers could step in and add temporary staff to help get the money flowing.

But Emergency Management officials need to admit that the pace of recovery is unacceptable. Instead, the agency’s message on Twitter last week was “building faster doesn’t always mean building better. NC’s primary focus is building stronger — that takes time.”

That message is true for long-range issues: Can the state improve infrastructure and land-use decisions to minimize damage from the next flood?

But as long as there are families who haven’t yet returned to permanent housing, those families should be the state and federal government’s first priority.

Because Seven Springs and other riverside communities have flooded before — and will probably flood again — leaders have to make tough decisions about where rebuilding makes sense. The Edgecombe County town of Princeville has bought land on higher ground for future development.

Eighteen months, however, is plenty of time to make decisions about who should come back and who needs to rebuild in a better location. Delays mean more displaced residents will start new lives elsewhere, and towns like Seven Springs could become ghost towns.

Here in the newspaper business, we thrive on deadline pressure. So state leaders should set a deadline to spend the grant money and get all storm victims back home — perhaps by the end of this year.

Cooper could consider hiring a “recovery czar,” ideally someone with disaster recovery experience in other states, to take charge of the process. That person could make funding recommendations to legislators, who can do their part through this year’s budget.

Casting blame and making excuses doesn’t help. North Carolina must get Hurricane Matthew behind us before the next storm hits.