Warriors, back to dominant selves, top Spurs in Game 1 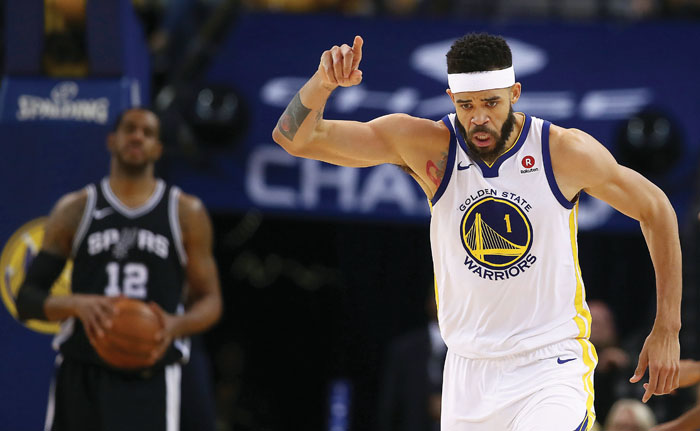 OAKLAND, Calif. (AP) — Kevin Durant helped the defending champions get defensive in a hurry, finishing with 24 points, eight rebounds and seven assists as the Golden State Warriors returned to their old dominant selves at playoff time to beat the cold-shooting San Antonio Spurs 113-92 on Saturday.

Durant, Draymond Green and Klay Thompson took charge in Game 1 of the first-round series to elevate the Warriors’ intensity at last playing without fellow All-Star and injured two-time MVP Stephen Curry, sidelined since March 23 with a sprained left knee.

Rudy Gay led the Spurs with 15 points off the bench as leading scorer LaMarcus Aldridge was limited to 14 points on 5-for-12 shooting.

Game 2 in the best-of-seven series is Monday night at Oracle Arena.

Embiid was a spectator in Game 1 of the first-round series because of a broken orbital bone around his left eye. The All-Star center has been hopeful he can return early in the series. The Sixers could end this one early with Embiid back in the lineup.

Simmons dished and dazzled in the paint and the Heat had no answer for Sixers reserves Marco Belinelli and Ersan Ilyasova. Belinelli and Ilyasova combined to hit four 3-pointers in the third quarter that helped shift the tone from physical and foul-filled to a long-distance game that allowed the Sixers to put away this one. They used a 15-0 run in the third in their first postseason game in five seasons under coach Brett Brown to get the rout rolling.

JJ Redick scored 28 points to lead the Sixers, who host Game 2 on Monday. Belinelli had 25 and Ilyasova 17.

TORONTO (AP) — Serge Ibaka had 23 points and 12 rebounds, Delon Wright scored 11 of his 18 points in the fourth quarter, and Toronto snapped a 10-game losing streak in playoff series openers by beating Washington.

DeMar DeRozan added 17 points, C.J. Miles and OG Anunoby each had 12, and Kyle Lowry had 11 points and nine assists for the Raptors, whose only previous victory in the opening game of a playoff series came in the second round against Philadelphia in 2001.

Toronto entered having lost an NBA-worst 10 consecutive Game 1s since, including six at home.

The top-seeded team in the Eastern Conference, Toronto made 16 of 30 3-point attempts, with Miles making four, and Ibaka and Wright each hitting three.

The Raptors host Game 2 on Tuesday.

John Wall had 23 points and 15 assists for the Wizards, while Markieff Morris had 22 points and 11 rebounds.

PAUL AND HARDEN LEAD NO. 1 SEED ROCKETS AGAINST WOLVES

HOUSTON (AP) — So far the trade for Chris Paul to give the Houston Rockets another superstar to help James Harden has worked famously.

Now the two, who have both had their fair share of playoff disappointments, will try to carry their regular-season success into the postseason when the Rockets open a first-round series with Minnesota on Sunday night.

The guards have been effusive in their praise for one another, with Harden recently joking that his relationship with the nine-time All-Star was “love at first sight.” Paul didn’t go quite that far, but a huge smile crossed his often serious face when asked how their pairing has worked.

“Unbelievable,” he said. “You just (don’t) get this opportunity too often in a career to play with somebody like James … you get a chance to appreciate greatness.

“What he’s doing on a nightly basis and stuff like that, it’s crazy and I’m in awe,” Paul continued. “I’m grateful I get to play alongside him.”

When told of what Paul said about him, Harden was quick to answer.

“You can tell,” he said. “It feels like it’s been forever but it’s not even been a year yet.”

Their work in the regular season led the Rockets to a franchise-record 65 wins. their first No. 1 seed and sixth straight playoff appearance. They are looking to win the title for the first time capturing back-to-back championships in 1994-95.

For the 32-year-old Paul, it’s a chance for him to finally shake off years off playoff woes after making nine playoff trips without advancing past the second round. But if he is haunted by the ghosts of playoffs past, he wouldn’t acknowledge it and was dismissive when asked if he thought this was his best chance to win it all.

What he and the Rockets do know is that they’re facing a talented team in the eighth-seeded Timberwolves, who had to win their last regular-season game to get into the postseason. They ended the NBA’s longest active playoff drought with their berth, putting them back in the postseason for the first time since 2004 when they lost to the Lakers in the Western Conference finals.

Getting the Timberwolves into the playoffs is a huge accomplishment for the entire team, but might mean just a little more to star Karl-Anthony Towns, who made a vow the night Minnesota selected him with the top overall pick in the 2015 draft.

“It means more than I think words can express honestly,” he said. “I made a promise to … Flip Saunders and it meant a lot to me that I was able to keep my word.”

Some things to know as the Timberwolves and Rockets open their series:

The series is a homecoming for Minnesota’s Jimmy Butler, who grew up in Tomball, a suburb about 35 miles from downtown Houston. But he insists he won’t have any time to get back out there this week.

But he did spend a little time on Saturday reminiscing about his high school days when he idolized a former Rockets star.

“I used to walk around the hallways and in the gym thinking I was Tracy McGrady,” he said. “I remember it like it was yesterday. He was my favorite player. I wanted to wear his number, wear his tennis shoes, all of that good stuff.”

Butler, who returned on April 6 after missing 17 games with a knee injury, said he’s fully recovered from his injury and is “well-rested” entering the playoffs.

This is the second time these teams have met in the playoffs. Their other meeting came in Minnesota’s first trip in 1997, when the Timberwolves were swept in three games. That Houston team was led by Hakeem Olajuwon, Clyde Drexler and Charles Barkley, and the Wolves featured Kevin Garnett, Stephon Marbury and Tom Gugliotta.

The Rockets are resigned to the fact that Towns, who led the NBA in double-doubles, will get his points under the basket and plenty of rebounds.

“He’s going to get a double-double,” Houston coach Mike D’Antoni said. “That’s who he is.”

However, they are not OK with letting him shoot 3-pointers. The 7-foot Towns ranked 14th in the league with a 42 percent average from 3-point range and knocked down a career-high 120 3-pointers this season.

“We (can’t) leave him open or let him walk into a 3 because we’re not guarding him,” D’Antoni said. “We have to be aware of that. You can’t take away his post-ups and his moves in there. He’s going to score on anybody, but you can do a really good job on the 3s.”

Despite finishing as the runner-up for MVP last season and being a front-runner for this year’s award, Harden still faces plenty of criticism for some of his past performances in the playoffs, notably, a terrible performance in an embarrassing 114-75 elimination loss to San Antonio in the conference semifinals last season.

But he has never been motivated by criticism, and he finds his drive in a far different place.

“Just going out there and being the best that I can be,” he said. “There’s no negativity that someone can say that can motivate me. Some people can get motivated by that. I don’t really care.”