Volunteer Week: Ravonda Britt is “hooked” on Meals on Wheels 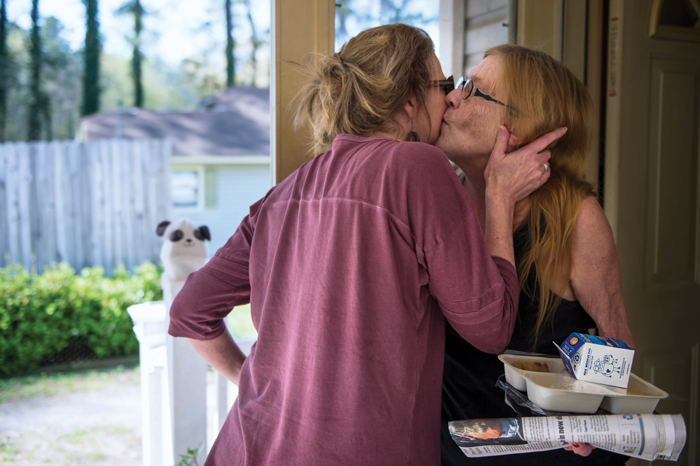 Gayle Fisher kisses Ravonda Britt on the cheek after she delivered her meals on April 13, 2018. (Photo by Rebecca Benson)

“In his social studies class, there was a requirement that they participate in preparing meals for Rowan Helping Ministries. So I signed up as the mom to help out,” Britt said. “From that time on, we were hooked. So I credit his middle school teacher for instilling that in my kids and me.”

Britt, a resident of China Grove, has now been a volunteer driver for Meals on Wheels for two and a half years. She said it’s still something she and her sons — 26-year-old Joshua, 24-year-old Patrick and 17-year-old Lucas — can enjoy together.

“Even with them being that age, to want to go with me when they can, it’s impressive,” Britt said.

Britt said her parents, who are both retired, are her more frequent companions on her routes. She said they accompany her on almost every one of her Friday deliveries.

“So it really is a family affair,” Britt said.

Britt works as an administrative assistant for the metro district of the United Methodist Church in Charlotte and has Fridays off from work. She said she delivers meals every Friday to one of two routes —west Kannapolis and Enochville.

“So it’s really not long,” Britt said. “I hope people hearing that realize that it really doesn’t take that much time and what a blessing it is to yourself and others.”

Britt said she could only explain her love for Meals on Wheels in one word: service.

“It’s just the service to the people. With some you can tell that I’m only person they’ll get to visit with that day,” Britt said. “They’re so happy to see you on that day and anyone who drives will tell you the same thing.”

Britt said anyone who has thought about volunteering with Meals on Wheels should “definitely do it.”