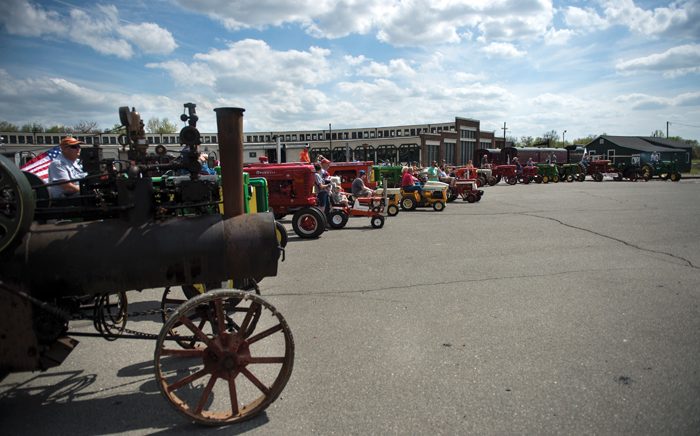 Tractors line up for a group photo during the Tractors and Trains Festival at the Transportation Museum April 14, 2018. (Photo by Rebecca Benson)

SPENCER — Warm weather and dogwood blossoms translated to high spirits at the North Carolina Transportation Museum on Saturday as guests came out for the Tractors and Trains festival.

“The weather’s beautiful. …I think people are looking forward to coming out and enjoying the spring,” said Kelly Alexander, museum executive director.

This year’s festival was bigger than ever thanks to a partnership between the museum and the Rowan County Convention and Visitors Bureau. In the past, Alexander said, the event has been a small one, but this year brought burgeoning crowds from across the state.

“We really focused on growing the event this year,” she said.

Thanks to the bureau, the Tractors and Trains event now falls under the umbrella of county “Arts and Ag” events, which helps draw a larger and more varied crowd. Alexander estimated that roughly 1,500 visitors were in attendance by mid-morning, and said that train ride tickets were sold out, which would bring festival attendance to at least 2,000 by the end of the day.

James and Nathan Lamm traveled from Raleigh to spend the day at the museum. They’re members of Pack 325 in Raleigh, and Lamm said each spring the group goes on a special trip.

“We look for something that’s within a couple of hours that’s interesting,” he said.

For Pack 325, the Transportation Museum was it. Nathan said he was enjoying the day.

“I enjoy riding the train and looking at old tractors,” he said.

Other visitors came from out of state. Jirah Cox and his family drove in from Fort Mill, S.C. for the day.

“It’s fun,” he said of the event. “The kids love to come and see the vehicles. …(they) love anything with wheels.”

He and 4-year-old daughter Ezri took some time to get out of the sun by browsing long rows of truck exhibits parked in the old Spencer Shops. Later that afternoon, the family would take a trip on the train, but for now, Ezri said she loved getting the opportunity to sit in the cab of a tractor-trailer.

For others, the museum is a familiar place.

“We probably come down here once a month,” Mike Calhoun said. “…It’s our home away from home.

He and wife Charlene are from Davidson County, but are museum members. Mike said they come down most often to see the Norfolk Southern 611; but he enjoys the other events, as well.

“I love tractors and trains, she don’t,” he joked.

For the couple, the event is a blast from the past.

“I grew up on a farm, so I just like old tractors,” Mike said.

In addition to trains and tractors, the day also featured a sampling of lawn mowers through the years, a combine, a corn-husking machine and a sawmill. And when rain canceled last weekend’s Arts and Ag Beer Festival, many vendors were invited to set up shop at the Transportation Museum Saturday. Alexander said a few took her up on the offer.

“It’s definitely been a success,” she said of the day.

Volunteer Week: Ravonda Britt is “hooked” on Meals on…