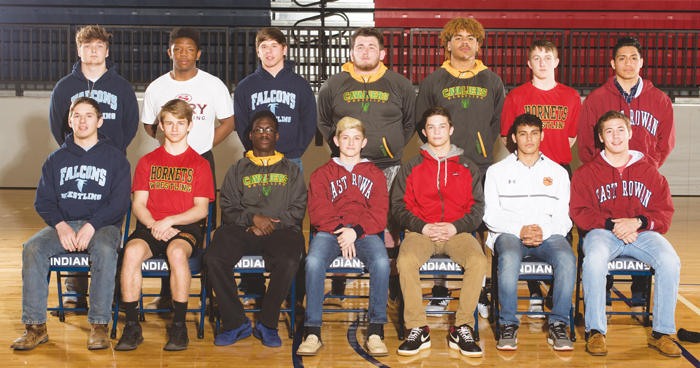 Lambert won the 2A state championship on Feb. 17 in Greensboro, defeating Wheatmore senior Jared Niemitalo the 2A Mideast Region champ.

Lambert, the county’s only state champion, finished the season with a 37-1 record. His lone slip came in the Boneyard Bash at Fayetteville’s Jack Britt High School in early January. Lambert lost in that tournament to Holly Springs wrestler Josh Lehr, who took runner-up honors in the 4A state tournament.

Lambert has been committed to wrestling since he was a first-grader, learning the ropes in the local RoCo program.

He made a splash as a freshman at South. Wrestling at 120 pounds in 3A, he placed third in the state tournament. He lost his second match, but then he worked his way through the “wrestle-backs” to earn a place on the podium. He went 33-7 as a freshman.

Nothing short of a state title was going to be acceptable for Lambert this season.  He won a number of tournaments along the way, taking the Rowan County title at 138 pounds, ruling the prestigious Holy Angels Invitational and claiming recent championships in the Central Carolina Conference Tournament and  2A Midwest Regional.

All those wins built confidence and constructed a mindset of winning.

People kept telling Lambert he was going to win again as he headed to the state tournament, but he still had to go out and do it.

The Falcons’ Lane Bolmer, Lucas Bolmer and Caleb Link join Lambert on the all-county team. Link was Most Outstanding Wrestler of the county meet.

West Rowan’s Jonathan Brown, was chosen the county coach of the year, based on the county tournament.