Ramirez, Red Sox get to 12-2, best start in team history 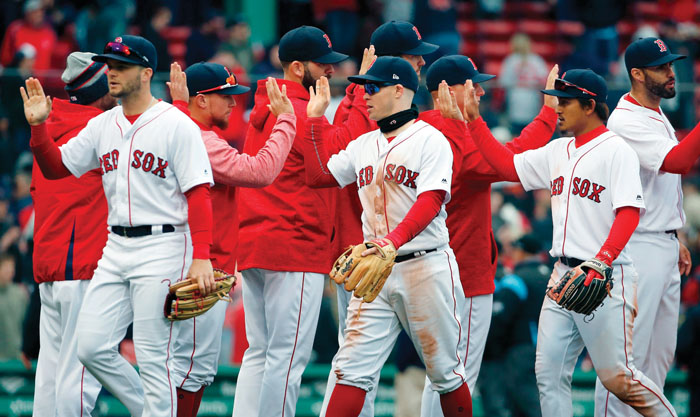 BOSTON (AP) — Red Sox rookie manager Alex Cora cracked a smile when asked how he felt when he learned it was the best start in team history.

“I just heard it for the first time,” Cora said after Boston beat the Baltimore Orioles 10-3 on Saturday to get to 12-2.

“I’ve been saying it for a while — we’ve been playing good baseball for a while, regardless of spring training,” Cora said. “We’re playing clean and fast and pitching. We’re proud of what they’re doing.”

Hanley Ramirez hit a two-run homer and drove in three runs, Andrew Benintendi had a two-run single and an RBI double, and J.D. Martinez homered for the Red Sox.

“Our offense is doing what it’s doing, and our pitching and our defense is consistent. We’re dangerous,” Benintendi said.

Alex Cobb (0-1) was roughed up in his Orioles debut, giving up eight runs — seven earned — in 3 2/3 innings. He signed a $57-million, 4-year deal as a free agent on March 21 after spending all 11 years of his professional career in Tampa Bay’s organization.

Pedro Alvarez had a two-run homer for Baltimore, which has lost four of five.

Cobb felt he was ready and gave credit to Boston’s hitters.

“We did all we could do,” he said. “There is no replicating this. This is the best team in the world hitting right now, and you’re never going to get ready for that.”

The Red Sox started fast as they’ve done frequently this season. They scored three in the first before making an out.

Mookie Betts opened with a walk and raced around to score on Benintendi’s double off the Green Monster, sliding ahead of a relay throw.

Ramirez then followed with his homer into the Monster seats, making it 3-0.

Martinez homered into Baltimore’s bullpen in the third.

“We’re doing everything right and having fun,” Ramirez said.

Ramirez was back in the lineup after missing Friday’s game with a bruised right wrist from getting hit by a pitch a night earlier.

“He actually beat me to the ballpark. That’s a good sign,” Cora joked.

Jackie Bradley Jr. usually is Boston’s center fielder. When Betts got hurt, he moved to right and made a headlong diving grab on Adam Jones’ liner.

“Just saw it was pretty low and the only way I was going to catch it was if I left my feet,” he said.

The Red Sox have scored six or more runs in six straight games.

“We’ve got a lot of sluggers in that lineup,” Cora said.

Jett Bandy also went deep against Matt Harvey (0-1) on a windy Fireworks Night at Citi Field as the Brewers cooled off New York and improved to 6-2 away from home. Slumping shortstop Orlando Arcia came off the bench and homered in the ninth inning.

About the only bit of bad news for the banged-up Brewers was another injury: Ryan Braun was removed in the fifth inning with back tightness.

It was the fifth straight win for the Phillies.

Arrieta (1-0) gave up three runs in 6 2/3 innings after being spotted a 6-0 lead in the second. The 32-year-old right-hander gave up seven hits and two walks in his second start for Philadelphia.

Doubles by Nick Williams, Kingery and Crawford were among six Phillies hits in a six-run second inning off Archer.

The Reds fell to a major league-worst 2-12. The Cardinals have won three in a row.

Garcia had a solo homer and a two-run shot off left-hander Brandon Finnegan (0-1). He also doubled.

HOUSTON (AP) — Ronald Guzman’s first career homer tied the game in the eighth inning, and he put the Rangers ahead with an infield single in the 10th as Texas rallied from five runs down to beat Houston.

The Rangers, who snapped a five-game losing streak, loaded the bases with one out off Will Harris (0-1) before Guzman sent a hard grounder up the middle that Harris tried to grab. It ricocheted off Harris’ glove, allowing Jurickson Profar to score.

Keone Kela (1-0) pitched the ninth for the win. Chris Martin allowed consecutive singles to start the 10th but induced lineouts from Carlos Correa and Yuli Gurriel. Alex Claudio came on and retired Josh Reddick on a grounder to earn his first save.

Houston has lost three of four after starting the season 9-2.

Brad Ziegler (0-3) retired the first batter in the Pittsburgh ninth before Starling Marte reached on a bunt hit. Josh Bell followed with a single that sent Marte to third.

Dickerson popped up a bunt that landed between Ziegler and second baseman Starlin Castro, allowing Marte to score. Dickerson is 16 for 36 (.444) with nine RBIs during a nine-game hitting streak.

WASHINGTON (AP) — Max Scherzer dominated after an early hiccup, striking out 11 and retiring his final 20 batters as Washington stopped a three-game skid.

Scherzer (3-1) issued a one-out walk in the first and Charlie Blackmon followed with a home run. That was all the Rockies managed in seven innings. against Scherzer, who has won the last two NL Cy Young Awards.

Slugger Nolan Arenado didn’t play as Colorado’s three-game winning streak ended. He dropped his appeal of a five-game suspension for a fight earlier this week and began serving the penalty.

The Angels won their ninth consecutive road game, and will have Shohei Ohtani as their starting pitcher Sunday. The Royals have lost five straight.

Trout hit his AL-leading sixth homer, a two-run drive in the fifth off Jakob Junis (2-1).

Upton homered to lead off the fourth. Valbuena snapped Junis’ 16-inning scoreless streak with a leadoff drive in the third.

Angels right-hander Garrett Richards (2-0) did not allow a baserunner until the fifth. Keynan Middleton worked the ninth for his fourth save in as many chances.