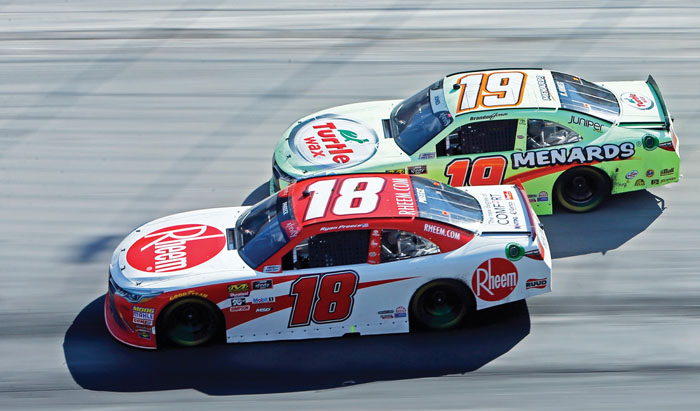 BRISTOL, Tenn. (AP) — Ryan Preece was willing to risk just about anything in hopes of bolstering his racing career. That meant going into major debt last year for a chance to run a few races on the Xfinity Series.

“Would I advise somebody to do what I did? Probably not,” Preece said of incurring debt. “But I wanted a chance. And it worked out. I guess if you want it bad enough it will all work out.”

Preece, driving the Joe Gibbs Racing No. 18 Toyota, added “it’s gratifying that when I leave here and I will be debt free.”

He became the seventh different winner this year in the Xfinity Series in as many races, beating Justin Allgaier and Daniel Hemric to the finish line. Elliott Sadler finished fourth and Spencer Gallagher was fifth.

Cup Series regulars were not eligible to compete because of restrictions placed on the Dash 4 Cash races.

The 27-year-old Preece was racing in only his third Xfinity Series event of the year. It didn’t bother the other Xfinity Series regulars that a non-regular like Preece won the money. In fact, they applauded his win.

“If you qualify for the show, you meet the criteria and you beat out 39 other dudes whose job it is to do this full time at a place like Bristol, well, congratulations you deserve it,” Gallagher said. “And that’s it.”

Added Hemric: “He drove his tail off and put himself in position and stepped up when he had to.”

Preece was strong all day, but it all came down to the final 10 laps.

Brandon Jones bemoaned the final caution that came out late. He gambled by taking on only two tires. Preece, who took four tires, was able to take him on the restart and he pulled away for an easy victory.

Preece was competing with three other qualifying drivers — pole sitter Cole Custer, Christopher Bell and Hemric —for the $100,000 prize.

“I take every race as a chance to build a future for myself,” Preece said. “Where I will be after this season I don’t have a clue. But I won’t be the one that prevents me from getting somewhere. I will do everything I can to make sure that I am not the weak link.”

BELL’S CRASH: Bell was one of the pre-race favorites and the stage one winner, but crashed just near the midway point of the race when he couldn’t avoid a collision between Vinnie Miller and Cody Ware. He car t-boned Miller, ending Bell’s day on the track.

MORE CASH UP FOR GRABS: Next week Allgaier, Gallagher, Jones and Sadler will contend for the $100,000 Dash 4 Cash prize at Richmond. Hemric would have been on that list but his car failed post-race inspection and he was replaced by Jones.

“It’s a huge deal to be able to go for that,” Allgaier said. “It was disheartening not to be able to (qualify) for it this weekend.”

HOT FEET: Custer’s gas man Andrew Migliozzi had the boot on his left foot catch on fire during a pit stop early in the race after the gas on the ground outside of the car caught fire. The fire was quickly extinguished and Migliozzi was not harmed.

TRADING PAINT: After a caution, Sadler and John Nemechek purposely banged in to each other.

SHEPHERD SITS: One week after running in his 1,000th start in a NASCAR national series race, Morgan Shepherd failed to qualify for the Xfinity Series race.