Jones in search of breakthrough win at Bristol 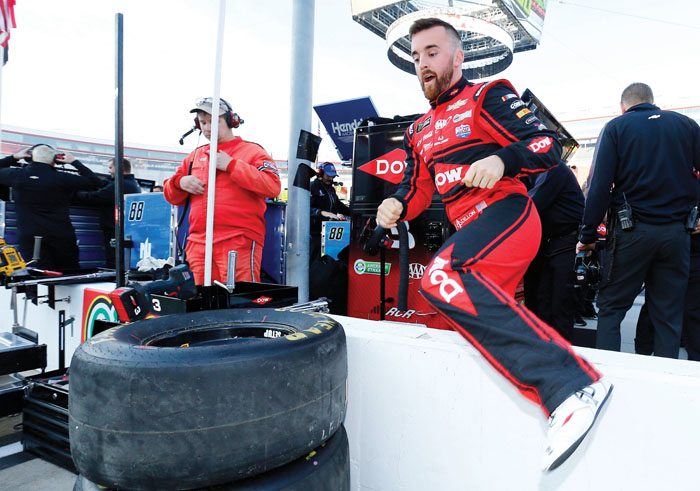 BRISTOL, Tenn. (AP) — Second-year Cup Series driver Erik Jones may be on the verge of a getting a breakthrough win at Bristol Motor Speedway on Sunday.

Jones is coming off a fourth-place finish last week at Texas and has finished in the top 11 five times in seven Cup races this season. He also has a history of running well at Bristol, earning the pole last August and leading a race-high 260 laps before finishing second to current teammate Kyle Busch.

Add in that the 21-year-old had the top 10-lap average in the first practice Saturday and there are the makings of a first career Cup win.

“Winning my first Cup race is something that I really want to get done,” Jones said. “I feel like if we can get one knocked out of the way that more is kind of going to come with that, so we’re going to continue to push this weekend.”

Jones won at Bristol in 2016 and 2017 in the Xfinity Series, so he certainly knows his way around the half-mile track.

“It’s good to come back to a place where your team is fast, where you’re comfortable and the car unloads good,” Jones said. “We’ve had a good weekend so far, we just need to keep it heading that way.”

WEATHER CONCERNS: NASCAR has moved the start of the race to 1 p.m. EDT due to the threat of heavy rains and thunderstorms in the area. But it may not matter as rain is predicted beginning in the morning and is expected to last all day and well into the night.

If the race is postponed, it will be run on Monday.

BUSCH CRASHES LATE: Kurt Busch was scheduled to start on the outside of the front row, but now is headed to the back of the field after a crash late in the final practice on Saturday.

Busch was in the midst of a late run when his No. 41 got into the inside wall and suffered significant damage. The team has gone to a backup car, which means Busch will need to start at the rear of the 39-car field.

BETTER LATE THAN NEVER: Brad Keselowski was in his trailer Friday afternoon when he heard the roar of cars running around the track. He wondered to himself, “What’s that?” It turns out nobody had informed Keselowski that the practice session had been moved up 30 minutes.

Keselowski hustled to his car and got in to drive a few laps.

“That was different,” he said with a laugh. “I guess they changed the scheduling and we didn’t know.  I found out the fun way. Better that than the race.”

It didn’t seem to hurt Keselowski, who wound up qualifying third.

HARVICK STARTS IN BACK: Kevin Harvick has won three Cup Series races already this year, but it won’t be easy to win a fourth at Bristol starting at the back of the field. Harvick’s suspension broke in practice on Friday and his car hit the outside wall hard. He was not hurt, but was forced to turn to a backup car for the remainder of the weekend.

SHORT TRACK SUCCESS: The Cup Series completes its early spring short track trio of races with Bristol this weekend and Richmond Raceway next weekend. In the past five years Carl Edwards has won three races at short tracks, while Jimmie Johnson, Joey Logano, and Kurt Busch all have two wins apiece.

KEEP AN EYE ON ROOKIES: Keep an eye on rookies Darrell “Bubba” Wallace Jr. and William Byron, who both posted top 10 finishes last week at Texas and look to carry over that momentum to Bristol.

FINAL PRACTICE: David Ragan had the fastest lap in the final practice Saturday, while Chase Elliott was second fastest and Denny Hamlin third.