Five years after marathon bombing, we are America Strong 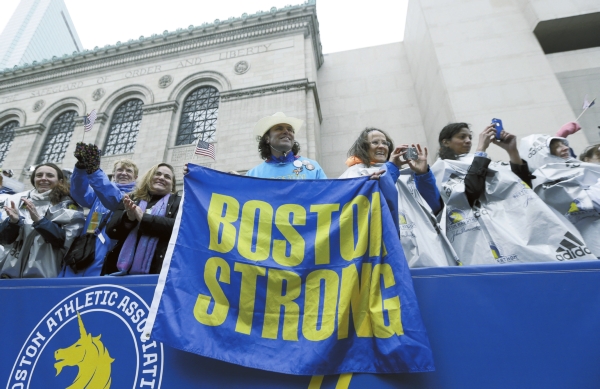 From a column by retired University of Florida professor Jim Burns about the Boston Marathon bombing on April 15, 2013:

For me, the Boston Marathon bombing was like a hot poker thrust into the smoldering embers of a recent fire — that then burst back into flame. The race itself is as American as apple pie, one of those iconic events by which the world knows us — and we know ourselves. These are my reflections on the fifth anniversary of this fatal attack that jolted me out of retirement.

We had welcomed the Tsarnaev brothers, Tamerlan and Dzhokhar, giving them a chance to integrate into our culture and pursue the American dream. Instead, they used low-tech terrorism, two pressure-cooker bombs, to give us an American nightmare.

… But as I delved into the hatred that terrorists, both foreign and domestic, had for America, seeing us as a bastion of imperialistic exploitation and discrimination, I began to reorient my writings. I saw how narrow and unfairly focused this hatred was on a particular flaw — as they saw it — in our American system. They were literally blowing up a tree without seeing the forest.

While no nation is perfect, my reflection on our history and my ancestral experiences began turning the terrorists’ hatred of American into my own renewed love for our country — not “our country right or wrong” but our country striving to move forward, correct flaws and injustices, and be that shining city on the hill that could be a beacon of hope for others, the torch of liberty held high by our iconic Lady Liberty statue on Bedloe’s Island. Look up, not down.

I used my great-aunt’s experience of crossing Cumberland Gap mountain in a wagon (since the train tunnel had caved in), the team of horses that pulled the wagon having to rest every 100 yards to reach the top of the mountain. Rewarded with a sunrise view of ridges of mountains bathed in a blue haze, Aunt Mary said she was in four states at once — Kentucky, Virginia, Tennessee and a state of bliss.

My articles referred to this as an example of America’s making piecemeal but generally steady progress in removing injustices to people of color, women, gays, workers, the impoverished, the handicapped and other groups deserving more equitable and fair treatment.

The young terrorist has neither the time, patience nor enough life experiences to see a single perceived injustice in a broader context.

I will receive withering criticism for inferring that such young men (and a few women) are hot-headed and make rash decisions to go out and kill a few people on the street or at the mall as an outlet for their anger. Those that survive to become older retired terrorists — there are many such men in Northern Ireland — generally realize that their violent methods were not only futile but counter-productive. Yet they had committed their life to “the cause” and cannot let go of at least paying lip service to that great idealistic motivator that robbed them of their youth and others of their lives.

So I began writing terrorism articles that were more analytical and more infused with American history and traditions — such as the Boston Marathon which was won seven times by Clarence DeMar, cousin of my father’s best friend. They had all grown up in Madeira, Ohio, exemplifying small-town America’s contribution to American greatness — and to the Boston Marathon.