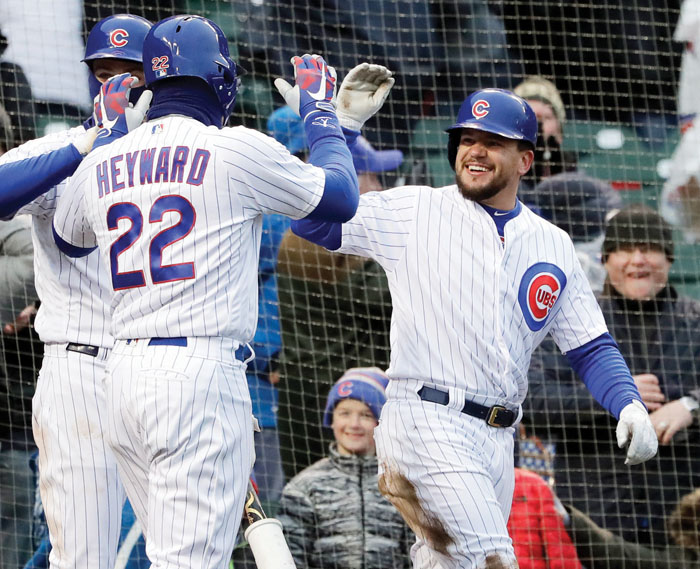 CHICAGO (AP) — Although Javy Baez usually swings as if every pitch is a potential home run, the Cubs slugger knew the conditions at Wrigley Field on Saturday warranted a different approach.

“I didn’t try to do too much to it,” Baez said. “Obviously, a ball in the air wasn’t going anywhere with the wind today. Just being smart and hitting the ball good.”

The Cubs trailed 9-1 in the third inning, were still down 10-2 in the sixth and went into the eighth behind 10-5. Chicago then used five walks, two hit batters, an error and a wild pitch to come back against four Atlanta relievers — all nine runs scored after there were two outs.

Baez drove in four runs, with his bases-clearing double making it 10-all. Ben Zobrist had three hits and two RBIs for the Cubs.

“How about our guys not quitting?” Chicago manager Joe Maddon said. “It would have been easy to pack in that game.”

Ozzie Albies had three hits, including a homer, and drove in four runs for the Braves. Dansby Swanson and Nick Markakis had two hits and two RBIs apiece for Atlanta.

“You like to hold on right there, but it was horrible conditions, about as bad as I have been in,” Braves manager Brian Snitker said. “I don’t know how the guys on either team did it, quite honestly.”

Despite a temperature of 38 degrees, a 24 mph wind and a steady mist at the start, the decision was made to play mainly because this was Atlanta’s only visit to Chicago and the forecast for Sunday was worse.

The temperature fell and the wind increased as the game progressed.

“Hopefully, we don’t play too many more games that are in these conditions,” Atlanta reliever Peter Moylan said. “Clearly, they didn’t want us to come back on our off day, so we had to play through.”

Jason Heyward led off the Cubs eighth by getting hit by a pitch from Luke Jackson and pinch hitter Tommy La Stella singled with one out. Right-hander Jose Ramirez fanned Efren Navarro for the second out, but hit Kris Bryant to load the bases.

Willson Contreras followed with an infield hit that made it 10-6 and Zobrist walked to force home another run.

Baez followed with his double to left-center for a tie at 10. After Addison Russell was walked intentionally, lefty Sam Freeman walked Heyward to load the bases again. Freeman then walked Schwarber and LaStella to plate two more runs and give Chicago a 12-10 lead.

Atlanta made another pitching change, bringing in the right-handed Moylan. A wild pitch scored a run and another scored on a throwing error by catcher Kurt Suzuki.

Players from both sides agreed that the conditions were a major factor in the wildness of the Braves pitchers.

“I give both teams a lot of credit for being professional under the circumstances, because the game really shouldn’t have been played,” Maddon said.

Braves: CF Ender Inciarte wasn’t in the starting lineup because manager Brian Snitker wanted to give him a day off.

Cubs: CF Albert Almora Jr. was back in the lineup after missing Friday’s game with an illness. He homered before being lifted after five innings.

There were errant throws because of the cold, wet baseball, but the major concern of playing in weather like on Saturday is injuries.

“Baseball is not necessarily designed for this,” Maddon said. “I don’t know to what extent in the future, maybe, they can talk about when even if it’s not actually physically snowing or raining, there might be elements that are not conducive to playing a legitimate game of baseball.”