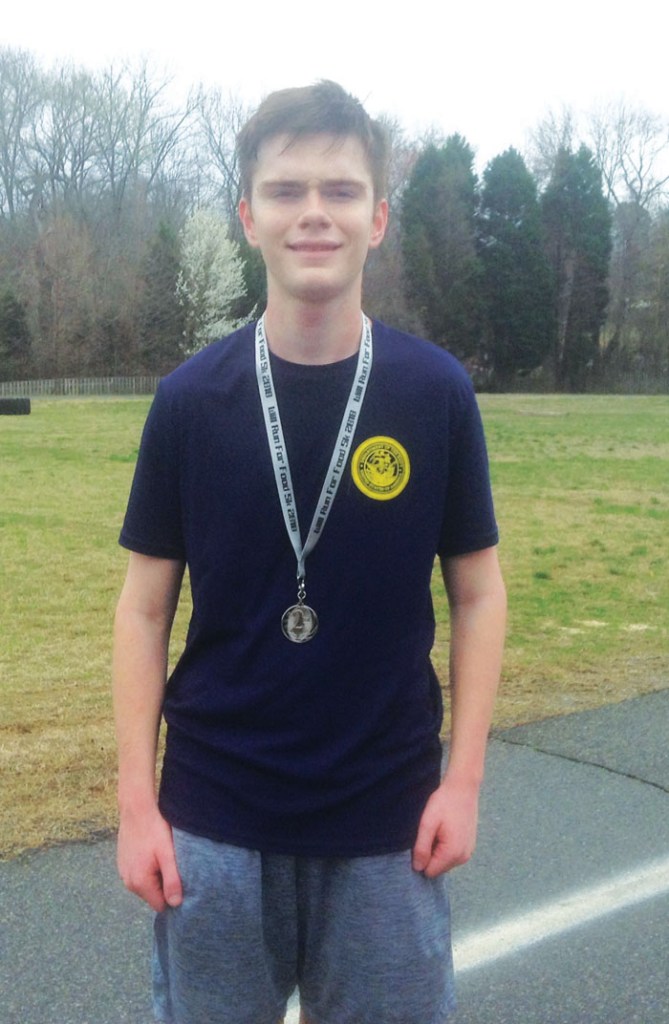 Navy recruit Harley Hirst after completing his running training with David. He is wearing the age group medal he earned at the Will Run for Food 5K in late February.

Harley Hirst heads for the US Navy

The US Navy has stringent physical requirements for those who desire to enlist. Those who are signing up for our military know about these requirements months before the actual testing occurs. It is a part of the process and the recruiters are supposed to provide training. Sometimes the results of that training aren’t exactly what is needed.

That is how I recently got involved with helping Harley Hirst prepare to enter the Navy.

Harley and his mom, Deborah Hirst, knew that his own preparation had not gone well and that time was running out. They visited Rayna Gardner, general manager at The Forum, and had a very frank and often difficult discussion. Rayna said, “When I first met Harley and his mom they both seemed really stressed out about Harley’s task ahead. As they shared it with me, I have to say, I really was skeptical at first. Not only was Harley out of shape physically, he was also out of shape mentally. By that, I mean he was really down on himself and displayed very little self-esteem. He seemed pretty hopeless. I knew I had trainers and connections that could totally turn this kid around physically, but he had to get his mind right and have faith in himself for any of their expertise to be of use to him. We spoke about that for a while and he and his mom both agreed they wanted to go for it! So I put them in touch with the best strength trainer I had, Rike, and the best running coach I know, David!”

That same afternoon, I heard from Harley’s mom about the conversation. Within a couple of days, I had Harley on the track at the Hurley YMCA thanks to executive director Richard Reinholtz and a policy that allows military recruits to use the facilities. Harley had to be able to run a mile and a half in 16 minutes or less. On that first day, Harley struggled through a quarter mile and was out of gas very soon afterwards. I continued the straightforward approach that Rayna had used and felt better about his willingness to get the work done. We set up a training schedule that coincided with his strength training at The Forum. Harley also had to meet goals in number of pushups and sit-ups over a two-minute period.

Harley did his workouts at both places, even though they were initially hard for him. Harley began to transform himself, build confidence and get results. The Forum’s Rijkent Zwann said, “I’ve had the pleasure of meeting Harley Hirst in early February to train and help him prepare for the Navy fitness test. This was a young man on the edge of defeat, out of shape, and lacking confidence but not willing to give up on himself. I’ve watched Harley grow stronger every week and completely transform himself into a new man ready to embark on a bright future in the Navy. I’m proud to have been a part of this transformation and prouder still of Harley Hirst. Well done!”

Rayna saw it too. She said, “Just about two weeks later after Harley began meeting with both Rike and David, I saw a different person. Harley was out on the floor doing his workout that Rike had made up for him and he was killing it! I spoke and found a complete demeanor change. He seemed so confident and proud and I was just so impressed and happy for him. I knew he was going to meet his goals.”

Harley headed off to begin his induction into the Navy last Sunday. By the end of his training with me, Harley had crushed the time needed for his mile and a half run. He was confident and ready to go. Harley expected to be inducted on Sunday and Monday in Charlotte and at boot camp in Waukegan, Illinois. He said, “This is definitely the right path. I am naturally nervous but now confident. After eight weeks in boot camp, I plan to go on to yeoman school in Biloxi, Mississippi, then to submarine school in Groton, Connecticut. After four years, I can get my college paid for and continue into the film industry afterwards.”

Harley doesn’t know anyone else going to induction at the same time as he is. He will have his physical testing late Monday or early Tuesday. He gets one call to tell his mom and dad, Edward Hirst, that he is OK. Those who don’t pass the physical requirements are processed out. His parents will see him again at boot camp graduation.
Harley closed with, “I want to thank all those who helped and encouraged me!” I look forward to hearing from Harley once boot camp is done.