Clyde: Time was: Deadlines meant what they said 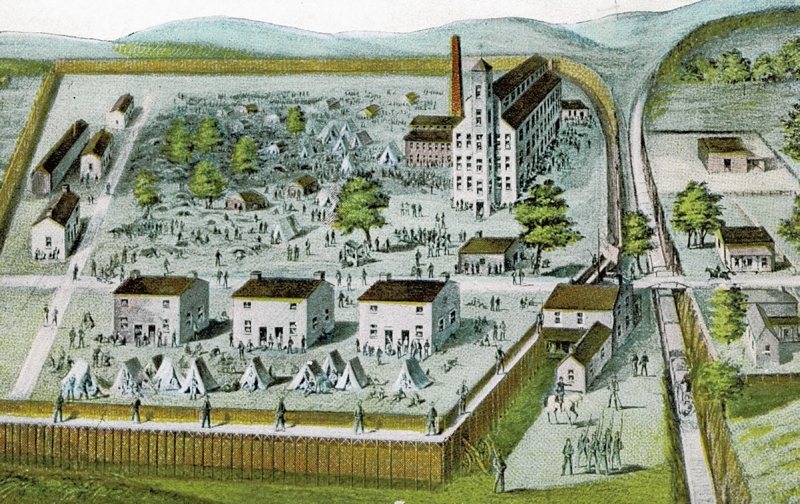 A lithograph of the Salisbury Confederate Prison

Time was, we had clotheslines and deadlines. Maybe the clothesline was strung between two trees, or a fancy, rotary umbrella-type, but every young housewife would hang out the clothes. Diapers in the sunshine smelled best. That and new-mown hay.

Wonder why nobody ever made perfume scents in those flavors? Rags on the bushes made a lot of sense, and it was free. Who would take their dirty laundry somewhere else to hang out to dry? People do every day, in more ways than one.

The first dryer came along not until 1938 thanks to T. Ross Moor of North Dakota. What did we do until then? Could we exist without it today?

That bag of clothespins would sure come in handy. The clothesline did double duty for beating rugs, starching curtains and hanging chickens after chopping off their heads. That was payback for all those bird droppings on the fresh, snow-white sheets — Cannon-label percale, 140 count, of course.

While you were not out chasing a passing shower, there were more pressing things to do. Ironing without electricity must have been impossible; that’s why you hired it done. Bleached, sprinkled, rolled, cooled starched, fluted, pleated and folded. Time was not a factor; we seemed to have more of it — or maybe we used it more wisely.

We had deadlines to get it done. Real deadlines, like the one at the Salisbury Confederate Prison, were dead serious. There was no apology, no do-overs, no make-up work, no take backs, no high-fives, no grade curves or what-ifs.

A trench about 3-foot-wide and two-feet deep located about 6 feet inside the wall. Any prisoners who came too near the line or crossed it were to be immediately shot. A young, home guard on the parapet stockade wall politely shot and killed a high-ranking Yankee prisoner who stepped over the line. He was not charged. What does that sound like?

With the anniversary of the April 12-13, 1865, destruction of the prison and half of our town by Gen. George Stoneman, it is a constant wonder if they could have known that Lee had already surrendered on April 9, and that Lincoln would be assassinated on April 14. We don’t celebrate that.

Deadlines come and go. When these pass, are we too late? Do we offer a half-hearted or rote apology or a fake, “I’m sorry” and it’s all expunged? Some people are always 20 minutes late, and we all agree nothing happens the first 20 minutes of a meeting, anyway. “Get me to church on time” without cell phones and water bottles. What true American would apologize for our history? It’s past, hopefully the suffering is over.

When 11 old survivors came to town from the home of their birth for the dedication of the marble and bronze Pennsylvania monument on Nov. 15, 1910, they were made to feel that they were surely in the hands of friends. Nothing was left undone by the members of the Confederate camp to make the stay of the Yanks in Salisbury one of the most enjoyable occasions of their lives — and even to be remembered. “Prominent places in the old prison will be designated by sign boards placed on the houses and fence.” Guess they didn’t have the Historic Preservation Commission back then.

“To say that there was anything but sincere belief upon the part of those contending on both sides in the great Civil War in the righteousness of their cause is an insult to the honesty of the intelligent and the brave, who risked and lost their all in support of their conviction of right. … In the great heart of the North there is no malice, no hatred, nothing but generous fraternal regard and regret for what seemed to be imperative necessity. … But it was their misfortune to come, in the course of a great conflict, prisoners of war; and to my mind no greater misfortune can come to any soldier who follows the flag, than to that which came to these men.”

“We are all home now — one great, grand, undivided, indissoluble country.”

Should these moments be removed? They remind us that “the price of freedom is eternal vigilance.” Recorded history offers no apology. Offer the hand of forgiveness. Keep your own record clean, wear clean underwear and don’t forget to wipe your nose. Whatever you do, don’t step over the line.

Clyde, Time Was: A penny saved is becoming a…