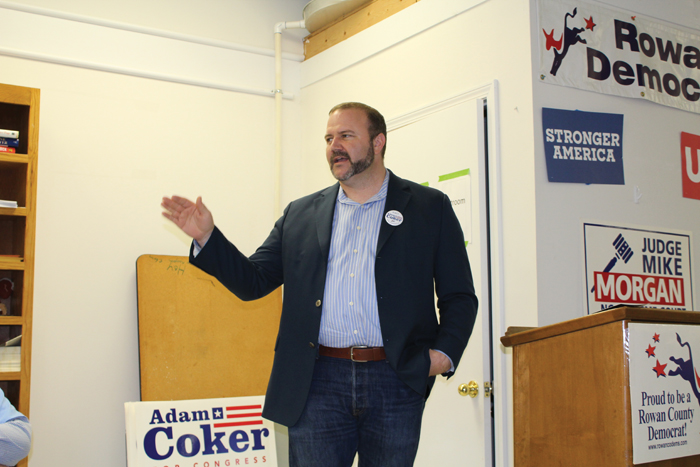 As Adam Coker addressed the room during the Rowan County Democratic Party’s monthly breakfast, he said he was particularly interested in the message of the Democratic Party.

Both hope to face Ted Budd during this year’s general election.

Coker said his interest in the party’s message came after an experience in the NICU with his son Elliot, where he encountered hundreds of devastated parents with no health insurance.

“I became deeply disturbed that month, because I’d never felt so powerless,” he said.

Coker said he was working to get Democratic message about party priorities to the average, working-class citizen in North Carolina.

“I am deeply concerned when I know I have a representative go to Washington who is a multimillionaire,” he said. “Are we going to nominate someone who will speak to the needs of working people in the South?”

In Washington, Coker said he would “hold the Democratic Party’s feet to the fire,” and work to see Medicare for all in this country.

Why? Because doctors prefer it, and because it would help citizens be able to plan and budget, he said.

“This stuff doesn’t make sense, folks,” he said. “We can’t afford to pay two to three times in health care what every other industrialized country does.”

He said that employment was going in the direction of 1099s, contract work: “Companies don’t want to employ people anymore, they want to give people a gig,” Coker said.

Another reason why people need to know how much their health care coverage is going to cost them, he said, and a reason to reduce the cost of community college.

“We need to retool the workforce in this country for the demands of the 21st century workforce,” he said.

Coker also spoke of plans to work to get nonviolent people out of prison, get violent people locked back away and to reduce recidivism.

He said he lost his father to gun violence when the man was shot in downtown Greensboro by “two men who weren’t supposed to have guns.”

Banning assault-style rifles would not have prevented violent acts like this, he said, but they would be a start.

“Our mass shootings are up 187 percent since 2004,” he said. “… I won’t let people tell me that progress in reducing that isn’t worth standing up for.”