Take a Wonder-full trip down the rabbit hole with PPT 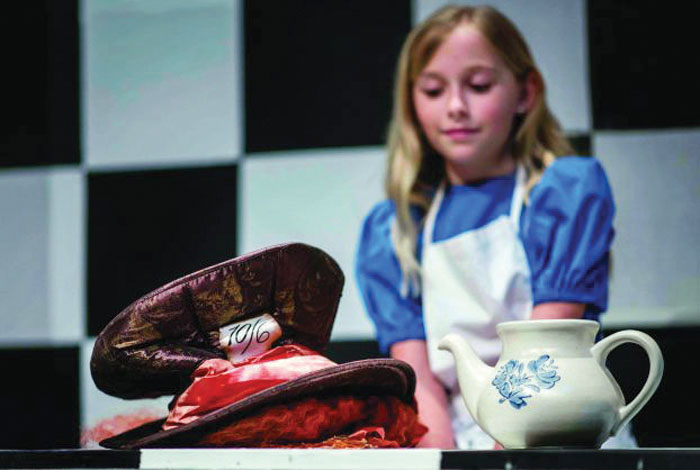 After following a rather dilatory rabbit to escape a dull afternoon, Alice falls down a rabbit hole into a captivating world of thoughts and dreams. She explores this world with the help of the Cheshire Cat and others, trying to find her way back home. She experiences an eccentric tea party, speaks with garden flowers, and is almost beheaded by the Queen of Hearts.

Following Alice’s journey through Wonderland was a unique and wonderful experience. Thanks to directors Austin Young and Reid Leonard, every single actor showed confidence and understood the characters to a degree that was noticed by all.

Gracie Spieler’s performance as Alice portrayed a feeling of wonder and awe induced by all the interesting characters in this show. After her fall, Alice is faced with a door she tries in vain to unlock. She sees people exit but can’t determine how to convince the door to open.

She tries until Alice’s doppelganger walks past her and enters. Alice chases this strange figure and finds herself in a garden with talking flowers (Brooks and Bailey Zino, Meredith Swain and Meredith Hall,) who embodied their characters amazingly.

The introduction of the Duchess (Grace Lemings) and her Cook (Emma Patterson) was exciting, unexpected and powerful. It set a valuable precedent for what was to come in this intriguing show.

This was also the introduction of the nonchalant Cheshire Cat, played by Laura Bullock. This was a character that left an unforgettable and lasting impression.

Alice’s path leads her to find herself taking part in a tea party hosted by a peculiar group that included the Mad Hatter himself (Elijah Carpenter) and the March Hare (Elliott Smith). They spoke of time and stories with the aid of the adorable Doremouse (Bryce Zino).

One of my favorite scenes was the confrontation between Tweedle Dee (Cooper Fleeman) and Tweedle Dum (Ben Zino). The tension grew as Alice helped these two prepare for their big fight, then left to chase the elusive and mysterious figure she saw before.

Alice later finds herself in the insensible trial of the Knave of Hearts (Jude Smeltzer) and defending him. The King and Queen of Hearts (Grace McCoy and Jacob Jackson) sentence Alice to beheading, but Alice is able to single-handedly take down their entire army of cards, then flee. Alice wakes up to find herself seeing her twin with her sister (Emery Franz) that same afternoon reflecting on her “dream.”

Alice enters the rabbit hole once again, with her sister following close behind. Alice is left perplexed after this surreal experience.

Seeing how the cast displayed the story was refreshing and showed how dedicated and involved everyone was with the show and the processes behind it. This group will surely impress anyone who attends this show.

Ali Khatib is an eighth-grader at North Rowan Middle School.