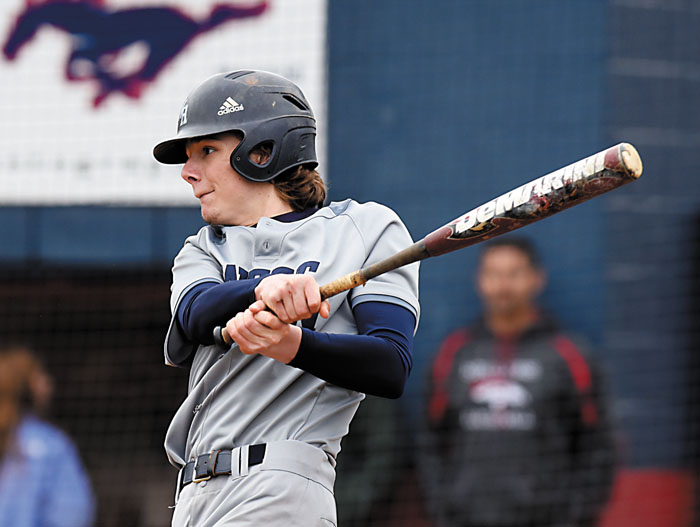 Wayne Hinshaw file photo/for the Salisbury Post ... West Rowan’s Olen Stamper, who pitched the Falcons past East Rowan on Friday night at West, also contributed with a single at the plate.

The West Rowan right-hander didn’t have a puppeteer’s control against visiting East Rowan, but he coupled a crisp fastball with a slow-bending curve and pitched the Falcons to a 5-3 North Piedmont Conference victory.

“He persevered. That’s a good way of looking at it,” coach Seth Graham said, shortly after West (10-8, 4-2) won its second straight game and moved into a tie for second place in the league standings. “He was throwing his breaking ball for strikes and his fastball looked pretty quick. When guys are having a hard time figuring out the curve and the changeup, that just makes his fastball even better.”

Stamper allowed only one earned run and two hits in 5 2/3 innings before throwing his 105th pitch. He was replaced by hard-throwing fireman Payne Stolsworth, who pitched himself into and out of trouble in the top of the seventh before earning his second save.

“Last time, they jumped on me early,” Stamper said, after winning his fourth game and avenging his only loss. “I didn’t want that to happen again, so I pitched a little bit backwards. On fastball counts I’d throw the curveball — just so they never really knew what was coming.”

The loss was rather consequential for East (12-5, 4-2), which had won its previous six games and beaten West twice this spring. The Mustangs had visions of catching conference frontrunner Carson, but were limited to three hits — singles by Matthew Mathis and Hayden Setzer, along with Wayne Mize’s towering double to left field in the top of the sixth.

“I’m disappointed,” said East coach Brian Hightower. “Maybe I didn’t do a good enough job getting us prepared to play this game. Even though we had beaten them twice, I should have made them understand the importance of tonight’s game. We just didn’t play very well, so I’ll take the blame.”

West built a 5-1 lead after five innings, with most of the damage coming against freshman right-hander Jake Hunter. The Falcons scored twice in the last of the first, plating one run on Daniel Durham’s sacrifice fly and another on an infield error. “(Hunter) threw a lot of first-pitch fastballs,” said Durham. “I knew what was coming. I just had to adjust my timing a little bit.”

East halved its deficit in the top of the third, when Mathis grounded a base hit into left field, took second Blake White’s walk and scored when Charlie Klingler’s bouncer to shortstop resulted in the first of three West errors. The Falcons returned fire when Mykal Berger lashed a one-out double in the bottom of the third and crossed when the lefty-swinging Durham feathered a two-out single into left. “I’d been pulling the ball all week,” he said. “That time, I tried to stay in my gap and hit it where it was pitched.”

West nourished its lead in the fifth when freshman catcher JT Fecteau hoisted a two-out, two-run bloop single down the right-field line against reliever Jake Davis.

“It was a feeling of relief when it finally came down and hit the ground,” said Fecteau. “Those were two big runs that helped us a lot in the late innings.”

East made things interesting by scoring an unearned run in the sixth and then loading the bases with two away in the top of the seventh. Setzer trotted home when Mize was hit by a pitch to make it 5-3. The game ended when Stolsworth fired a sizzling, 2-2 fastball past Corbin Moss.

“I think a lot of people thought he’d throw a curveball,” said Fecteau, who relayed the sign from West’s bench. “That was his (four)-seam that just ran out. Payne definitely had to work for it, but we all knew he had it in him.”

That was East’s only consolation. “We fought hard and made them have to make pitches,” said Mize. “They won, but we made them fight for it.”

NOTES: Stamper finished with eight strikeouts, two walks and lowered his ERA to 2.10. Berger went 2-for-3 and boosted his team-leading batting average to .368. … Mize continues to operate at full throttle. The sophomore is batting .372 with 24 RBIs. … Both teams play NPC games on Tuesday. East visits Carson and West travels to South Iredell.