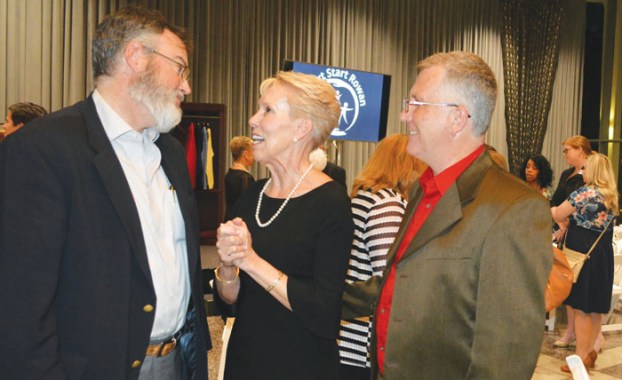 Welch, who retired in 2017 from Rowan Public Library as children’s outreach program supervisor, was named the Shirley P. Ritchie Champion for Young Children on Thursday evening in a ceremony at Catawba College’s Crystal Lounge.

Smart Start Rowan was the sponsor, and the evening’s theme was “Won’t You Be Our Neighbor?”

Dana Winters, director of simple interactions and academic programs for the Fred Rogers Center in Latrobe, Pennsylvania, was the keynote speaker. Winters also spoke at a community program for Smart Start Rowan on Wednesday morning at Rowan-Cabarrus Community College.

Echoing the theme, emcee Preston Mitchell set a gentle tone — red sweater and sneakers included — singing familiar tunes from “Mister Rogers’ Neighborhood” as a stoplight flashed beside him on the stage.

Welch was involved with Smart Start Rowan for 18 years. Even after her move to Charleston, South Carolina, last year, Welch completed her service on the Smart Start Rowan board. She called in to meetings, despite the din of hammers and saws in the background as her Daniel Island home was being renovated.

Board member Jimmy Greene asked Welch if the renovations are done, and Welch reported that they had just recently wrapped up.

“Are you getting to the board meetings on time?” she teased him.

“My only goal is to beat Jason Walser,” he told her, as they shared laughter and hugs.

Another focus of the evening was Smart Start Rowan’s family support programs. One young mother, Jessica Absher, spoke of her long opioid addiction and noted she had been clean for 10 months. Absher, who has three children, is working with Smart Start Rowan and other local agencies to get her children back. She recently was allowed unsupervised visits.

“Jessica was so courageous and she did a remarkable job,” said Amy Brown, Smart Start Rowan’s executive director. “Many people were crying as she spoke. Jessica’s story and her desire to achieve success for herself and her family are why we do the work we do.”

Smart Start Rowan’s families also inspired Welch in her work, so it wasn’t hard to get Welch to the ceremony. Fortuitously, she’d told Brown she’d be there after she completed her board service.

Joining her were her mother, Martha Hayes, and her sister and brother-in-law, Martha and Rex Brown.

Welch moved to South Carolina last year to be closer to her family. Martha Brown came to the event directly from the airport in Charleston after a trip from out of town. She was able to work it out at the last minute, she said.

“I knew I had clothes in my suitcase that would work. Whatever it takes, that’s what you do,” she said.

That was her sister’s mantra, in her library work and in her work with Smart Start Rowan. Even though she’s no longer in town, said Phil Barton, a former board chairman who presented the award, Welch is still available to the organization.

“She will always be a very loved and respected part of the Smart Start Rowan family,” Barton said.

Welch asked Barton to hold her award, recalling she’d once kicked off a shoe when telling a story to children. Demonstrative by nature, Welch uses her hands constantly when she talks, so she didn’t want to take a chance, she said.

She first thanked Barton, former director of Rowan Public Library, for his support.

“He gave me an opportunity to work with children. You were my helper,” she said.

She then remembered Ritchie, who died in 2015.

Barton also announced the creation of a scholarship in Welch’s honor, the Champion for Young Children Scholarship Fund. The fund will assist parents who temporarily need help paying for child care.

Afterward, Welch asked for clarification about the scholarship. “It’s in my name?” she asked. “That’s awesome. All I want is for people to support this organization. I want them to be that neighbor, that helper.”

By Jon C. Lakey jon.lakey@salisburypost.com SALISBURY — A downtown parking lot was a spectacle for many shop owners, workers and... read more