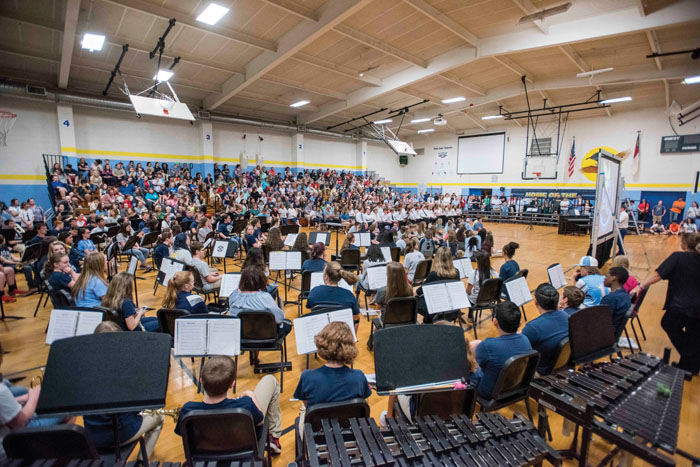 C.C. Erwin Middle school held a day of activities on campus to celebrate the 50th birthday of the school. Jon C. Lakey/Salisbury Post

GRANITE QUARRY — Erwin Middle School welcomed its 50th birthday with song and celebration Friday. For many of those who flooded through the doors, it was a homecoming.

Allison Culp, 41, attended Erwin in the 1980s, but her memories of the school start much earlier.

Culp’s father was a math teacher at Erwin, she said, and he used to take her to school on workdays. She said she has an early memory of jumping on a trampoline in the school gym on a student holiday, with Erwin teachers surrounding the perimeter to catch her if she fell off.

As she grew up, the school became like a second home for her. She’d spend the afternoons in her dad’s classroom while he finished grading papers, and the school secretary always asked about her grades.

“She would always give me a quarter ever time I got a 100 on a spelling test,” she said.

For Culp, Erwin’s core staff became a sort of extended family. It’s a sentiment that was echoed by current Principal Daniel Herring. He is in his first year as principal, but in that time he’s witnessed how the community wraps around the school and supports it.

“This is a great school steeped in tradition and excellence,” he said.

The afternoon festivities included a blending of old and new. Current students, parents, alumni, staff members and local residents participated in games on the baseball field, walked down a reopened nature trail or flipped through old yearbooks in the media center.

Culp’s daughter graduated from Erwin two years ago, and her son will start at the school in the fall.

Others toured the school and tried to revisit their past in the hallways.

Goodman is grown up now and works as a teacher’s assistant at Rockwell Elementary, but she remembers her time at Erwin fondly. Walking the school’s polished, tile floors, she had a hard time picturing where her younger self attended class or rushed to get books from a locker. The school has added a wing since Goodman attended in the late 1990s.

Goodman’s daughter Isabelle will attend Erwin in the fall.

One person attending Friday’s celebration has been with Erwin since the beginning and has shepherded it through the years.

Elliott Mathis is a former assistant principal. Before that, he was a teacher here, and before that, a student.

Mathis was a student when Erwin Middle opened in 1967. After he retired, he came back to serve the school as a volunteer and is known among students for keeping the school courtyard green and growing year-round and for organizing the annual dodgeball tournament.

“I’ve enjoyed almost every minute now,” he said of his years at Erwin.

These days, the school is nicer, he thinks. But the students are still the same, and Erwin is still home. Mathis said he hopes to stay involved for years to come.

“I just want to make sure people continue to have a good experience here,” he said.

The anniversary was also commemorated with the burial of a time capsule, which was designed, built and filled by Erwin students. It will be dug up in 2028.

The highlight of the evening was a song commissioned by the 2018 Erwin Honors Chorus, in honor of the school and Starr Forney, a longtime physical education teacher who passed away suddenly at the beginning of the school year.

The song, “I Will Fly,” was composed by Tom Shelton and Camilla Pruitt and was based on two poems penned by Erwin students.

Music was performed by the current honors chorus, the East Rowan Honors Chorus and alumni members of Erwin’s honors chorus from all decades.

And the community is looking forward to 50 years more.