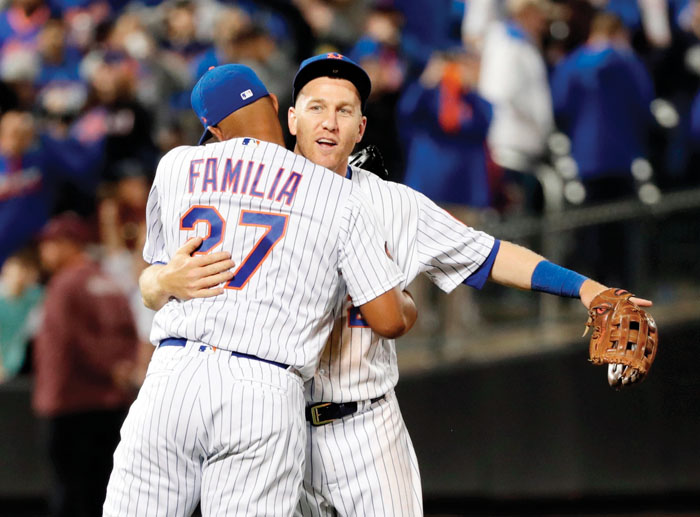 NEW YORK (AP) — Todd Frazier and the New York Mets are grinding out win after win after win, and he already has devised the team gesture.

Frazier hit his first two home runs with the Mets , new catcher Jose Lobaton tripled in his first at-bat with the team , and New York extended its winning streak to nine with a 6-5 victory over the Milwaukee Brewers on Friday night.

Mets players are celebrating throughout games with a salt-and-pepper shaker motion promoted by Frazier to signify their grinding approach.

“Put a little seasoning on the year,” he said, giving the alternate rationale. “We’ve got to have fun. It’s baseball. You feel like a little kid.”

Steven Matz ended an 11-start winless streak dating to June 28 as New York became the first major league team to start 11-1 since the 1955 Brooklyn Dodgers. Under new manager Mickey Callaway, the Mets are on their longest winning streak since 11 consecutive victories from April 12-23, 2015.

“We expect to win,” said Frazier, who also singled and walked. “Once you expect to win and you truly believe, I think there’s no going wrong.”

The gregarious New Jerseyite — he limited his postgame remarks to two minutes in order to head to Toms River for his son’s Little League game Saturday — popularized a thumbs-down salute with the Yankees last year after he homered during a Tampa Bay-Yankees game moved to Citi Field and a Mets fan was caught making the motion to him.

“When we made offseason acquisitions, we had the clubhouse atmosphere in mind,” Callaway said. “Bringing Jay Bruce back, getting Adrian Gonzalez, getting Frazier, signing Jose Reyes back, those are all huge pieces in your clubhouse that help create that relaxed atmosphere that we’re seeing and that fight that we’re seeing throughout the game.”

It was 68 degrees on the first warm home night of the season, contributing to a crowd of 34.921.

“It felt like playoff atmosphere,” Frazier said. “I guess they know what we got. We know what we’re capable of.”

Signed after a successful run with the crosstown Yankees during the second half of last season, Frazier homered against Zach Davies (0-2) leading off the second in his 37th at-bat with the Mets, a drive to center off the housing of the Home Run Apple.

After Hernan Perez tied the score with a two-run homer in the fourth against Matz (1-1), Frazier lined a home run to left starting the bottom half to put Mets ahead for good. New York opened a 6-2 lead in the fifth, which included Bruce’s RBI double, Gonzalez’s sacrifice fly and Dan Jennings’ run-scoring wild pitch.

Lobaton came up from Triple-A Las Vegas to help fill the catching void created when Travis d’Arnaud tore a ligament in his right elbow, which will require season-ending Tommy John surgery, and Kevin Plawecki went on the disabled list with a broken left hand, an injury sustained Wednesday when he was hit by a pitch. Plawecki is expected to be sidelined for three to four weeks, and Lobaton will split time behind the plate with rookie Tomas Nido.

Lobaton tripled in the second past a diving Braun down the left-field line. It was his fourth big league triple and first since April 22, 2016. He became the first Mets player to triple in his first at-bat with the team since pitcher Eric Cammack at the Florida Marlins on July 5, 2000 — his only big league plate appearance.

Davies, a 17-game winner last year, needed 64 pitches to get through three innings and gave up five runs and seven hits in 4 1/3 innings. He fell behind in the first when Yoenis Cespedes hit an RBI single.

Brewers CF Lorenzo Cain returned after missing two games because of a strained left quadriceps and went 1 for 2 with a pair of walks on his 32nd birthday. He was shaken up when Santana ranged over from right to catch Bruce’s sacrifice fly and Santana’s knee collided with Cain’s quad.

“It’s so loud out there,” Cain said. “We didn’t pick each other up until the ball was coming down.”

Cain reached on an infield hit in the seventh — Frazier’s backhand snag at third saved a double — and then was thrown out by Cespedes trying to go from first to third on Santana’s single to left.

“That’s a mistake, for sure,” Counsell said.

Brewers: OF Christian Yelich (right oblique) hit in a batting cage and hopes to be activated Sunday, the first day he is eligible. … C Manny Pina missed his second straight game because of right calf tightness.

BOSTON (AP) — Eduardo Nunez hit a three-run homer, Eduardo Rodriguez struck out eight over six stingy innings and Boston equaled its best start in 100 years with a win over Baltimore.

Rafael Devers went 3 for 5 and scored twice for the Red Sox, who improved to 11-2. J.D. Martinez had a pair of hits and drove in a run with a sacrifice fly during Boston’s four-run first inning, which put the Red Sox in command on the way to their 11th victory in 12 games.

DETROIT (AP) — Aaron Hicks hit an inside-the-park home run in the second inning, then added a solo shot over the fence in the sixth to send New York past skidding Detroit.

Hicks came up with a runner on second and hit a drive to right-center that bounced off the wall and past center fielder Leonys Martin. The ball rolled across a vacant area of turf while Hicks circled the bases for the Yankees’ first inside-the-park homer since 2011.

He was able to trot home four innings later, when his homer to right cleared the wall by plenty. Hicks also homered twice on April 13 last year, against Tampa Bay.

WASHINGTON (AP) — Carlos Gonzalez homered and had a sacrifice fly to drive in both of Colorado’s runs, leading the Rockies to their third straight victory.

Scott Oberg (1-0) pitched 1 1/3 innings in relief for the win, and Wade Davis worked the ninth for his sixth save as five Rockies relievers combined for 4 1/3 hitless innings.

Bryce Harper hit a sacrifice fly for Washington, which has scored five runs while losing its last three games.

St. Louis came into the series with a stagnant offense but broke out during two games against the worst pitching staff in the majors, piling up 18 runs and 25 hits. Molina — booed loudly in each plate appearance at Great American Ball Park — has homered in each game.

Luke Weaver (2-0) allowed Devin Mesoraco’s two-run homer while pitching into the seventh and beating the Reds for the third time in a row. Bud Norris worked the ninth for his second save.

Sanchez struck out six and walked one. The right-hander lowered his ERA to 1.29 through two starts and three appearances after signing a minor league deal in mid-March.

Tucker delivered the big blow in the fifth when he drove a long homer to right, and the Braves did all of the scoring in the inning while chasing Darvish.

The four-time All-Star got tagged for four runs and nine hits in 4 2/3 innings. Darvish walked four and struck out four while throwing 105 pitches, and Chicago lost again after dropping two of three to the surging Pittsburgh Pirates.

CLEVELAND (AP) — Teoscar Hernandez made the most of his season debut, driving in the go-ahead run with a single off All-Star Andrew Miller in the seventh inning as Toronto rallied past Cleveland.

Hernandez, who was recalled earlier in the day when the Blue Jays placed third baseman Josh Donaldson on the 10-day disabled list, added an RBI double in a three-run ninth.

Steve Pearce also doubled in a pair of runs in the ninth for Toronto, which trailed 4-0 after two innings but came back against Zach McAllister (0-2) and the normally unhittable Miller.

Danny Barnes (1-0) pitched one inning, and three other relievers finished up for Toronto. Cleveland’s five-game winning streak was snapped.

Edubray Ramos (1-0) got the final out in the eighth with a runner on third before Hector Neris worked the ninth for his second save.

Philadelphia tied it at 1 on Carlos Santana’s RBI single in the sixth off reliever Jose Alvarado.

Tampa Bay dropped to 0-6 when allowing three or fewer runs.

JB Shuck had a career-high four hits in his first major league game since 2016, and Miguel Rojas added three hits for the Marlins, who snapped a three-game losing streak. Miami posted season highs in runs and in hits with 14.

The Pirates, who entered leading the NL in batting average and runs, were held to five hits.

Busch brothers will start on the front row at…