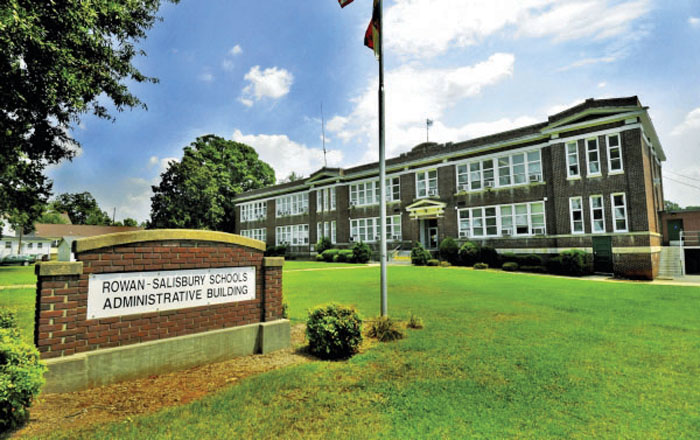 EAST SPENCER — The former East Spencer Graded School, erected in 1903, was placed on the National Register of Historic Places this week.

The building, which most recently housed the Rowan-Salisbury Schools administrative offices, was purchased by the town in 2016.

The building was the only public school for the town’s white youths from about 1900 until desegregation in 1969. The school, which served students from first grade through high school, today is two buildings.

One is a one-story masonry erected in 1903 and expanded in 1913. The second building is a two-story Classical Revival-style building designed by Charles C. Hook and erected in 1921.

The building was expanded in 1937 with the north classroom block and a rear auditorium designed by architects Yoe, Northup and O’Brien. Both buildings are intact and increasingly rare examples of early 20th-century institutional architecture in Rowan County, according to the registry application.

The building sits on a 4.35-acre tract across from Town Hall, the East Spencer Fire Department and the post office.

The application includes details about the design of the building, the changes over the years, historical background and the education uses.

Town Administrator F.E. Isenhour said the town received a confirmation letter a couple of weeks ago. However, town officials knew once they were placed on the state registry it was a matter of time the building would be placed on the national register, he said.

The Landmark Group, a development group based in Winston-Salem, is the lead developer on a project to renovate the building into senior housing. The town partnered with Landmark to develop the site.

The application process was done by Landmark Group at its own cost, Isenhour said.

Isenhour said the national historic status will allow the developer to apply for grants and possibly get tax credits.

Over the years, various federal and state incentives have been introduced to assist private preservation initiatives, including tax credits for the rehabilitation of National Register properties. As of Jan. 1, more than 3,665 rehabilitation projects with an estimated private investment of over $2.571 billion have been completed, according to the North Carolina Department of Natural and Cultural Resources.

“It brings the cost of doing the renovations down,” Isenhour said.