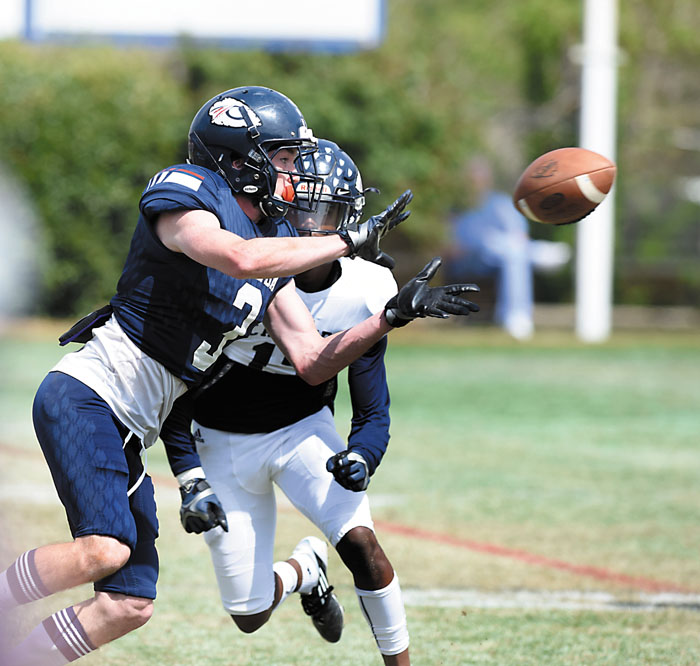 SALISBURY —  A shortage of offensive linemen transformed Catawba College’s annual Blue-White football scrimmage into a jazzed-up practice session, but the Indians are content with where they are now and where they may be headed this fall.

“It’s the end of the spring, and I just allowed myself a sigh of relief,” Catawba head coach Curtis Walker said. “We stayed healthy. That’s always the No. 1 goal. The second goal for the spring is to get better, and we did that. We’ve got a 2.75 team GPA, so we’re excited about what these young men are doing on the field and in the classroom.”

Catawba is coming off a hollow 9-2 season. Hollow because despite the gaudy record, Catawba didn’t accomplish the two goals Walker set for the team in 2017 — and will set for the team again next fall.

“We’ve set a standard here and this program is about winning the South Atlantic Conference championship and making the playoffs,” Walker said.  “Yes, we were 9-2, but that was 9-2 with no championships and no playoffs.”

Catawba has been working for a solid month to have a chance to repeat 9-2 — or better it. The only difference on Saturday at Shuford Stadium was a louder audience.

Gone are workhorse back Eamon Smart, efficient quarterback Patrick O’Brien, sensational receiver Sam Mobley and the stellar defensive trio of Kyle Kitchens, Trey Evans and Michael Peppers. Those are huge subtractions — tons of TDs and sacks — but Catawba appears to in good shape at quarterback, It’s also true that fewer linebackers are required with Catawba frequently in a 4-2-5 defensive alignment. All-American linebacker Kitchens was essentially a defensive end as a senior.

“All those guys were great  players and those three linebackers played in so many games for us,” Walker said. “But I believe our talent level is still high. My concern is depth. We’ve got to keep filling in that depth if we’re going to compete at a high level.”

Catawba hasn’t settled on a first-string quarterback. Reid Carlton, injured last season, will be a junior this fall as far as football eligibility. He has a strong arm, experience, size and a solid track record. But Ken Avent III, son of a former Catawba QB and a redshirt last fall as a freshman, looks ready. He’s pushing Carlton. Walker is thrilled that he’s pushing Carlton.

“We’ve had a great quarterback competition since the first snap of spring ball,” Walker said. “They’ve both done well, and we expect their competition to continue in the fall The only way you’re going to get better is competition.”
A third quarterback, John Williams, another redshirt freshman, got a few reps on Saturday. Catawba also added a touted quarterback in this year’s recruiting class (Jack Mangel, Athens, Ga.), so Walker and new offensive coordinator Dustin Ward aren’t losing sleep over the QB situation.

The most exciting play on Saturday was turned in by Jourdan Osinskie, the returning All-SAC tight end. Osinskie gets  more muscular every year and now checks in at 6-foot-3, 245 pounds. He’s also fast, so he’s probably the Indians’ best pro prospect. Catawba was running a two-minute drill late in the day when Osinskie soared to reel in a 61-yard fling by Carlton for a touchdown.

“I saw Reid running out, and I just kept fading,” Osinskie said. “Reid has a cannon, and I knew he’d get the ball there.  I just went up and got it. I had a lot of catches last year for a tight end (30), but without Mobley my role probably will be bigger. I’m ready for that challenge. I’ve got big dreams. Next-level dreams.”

Earlier Catawba had worked on starting drives with modest field position at its 30, and Osinskie made catches for first downs on passes by Avent as well as Carlton.

When Catawba worked on red-zone execution, Osinskie muscled his way to another impressive catch. He had quite a day, as did Zac Waters, the No. 2 tight end.

Veteran wideouts headed for bigger roles in the fall are handyman Joseph Dress and speedster Gavin Rose. Rose snagged a pass from Carlton and weaved his way to a 51-yard gain. Dress caught a 32-yard pass from Avent  and also grabbed a touchdown pass from Avent during red zone drills. Another name to know: Will Sweeper. He has the wheels to be a difference-maker.

While Catawba threw it around on Saturday, the Indians will strive for balance this fall.  The rushing of blazing back Kenyatta Greene is going to be key to Catawba’s fortunes. Greene broke a run for 24 yards, and Demonte Good came out of the backfield for a 16-yard reception.

Walker was more pleased with his short-handed offensive line than with any other position group.

“It’s been tough for us this spring with 10 guys basically handling all the reps,” Sands said. “We had to push through it when we were tired, had to keep going for the team. It’s going to really help us this fall because we already know how to keep working when we’re tired.”

Several local players could see significant playing time this fall. Brenden Westbrook, the former Carson High flash who redshirted as a freshman, is  making a transition from cornerback to safety. Cornerback was about accepting a physical challenge and using his speed and length to win 1-on-1 battles,  but safety is a more cerebral position. Westbrook is learning different reads and new angles.

“I’m excited about what I’ve learned this spring,” Westbrook said. “I’ve gotten a lot of reps and I’m learning. But it’s not easy. I’ve been a cornerback my whole life.”

“Well, the guy is about 6-foot-5, so he can cover so much ground,” Murray said with a smile. “He’s just young, but we’ve got experienced guys to teach him.”

One of those experienced guys is safety Jeremy Addison, a starter who is back on the field after suffering an injury last season. Cornerback Cris Page, is a high-impact returning DB.

Davis threw in a shimmy dance following a sack that was of regular season quality.

Veteran linebacker Eric Gibson, another North Rowan product, is expected to play more this season, even though Catawba will have some stud linebackers reporting with its latest recruiting class.

“I was really way down on the depth chart when I got here,” Gibson said. “I learned a lot from Evans and Peppers, and I’m hoping to just keepmoving up. We’re still a young defense. We’re still trying to figure out who we are.”

Isaiah Huffin, a special athlete who turned in a sack — and an acrobatic back flip — on Saturday, has the talent to lead Catawba’s linebackers. L.J. Melvin, another talented returner with upside, forced a fumble on Saturday.

All-SAC Lee Brackman kicked a 36-yard field goal. A sizable portion of the day was devoted to special teams.

The scrimmage ended on a high note, with Avent breaking loose and dashing around right end to the end zone.

After that, Walker gathered the troops and reminded this team that as good as the 2017 bunch was, there were no playoff games and no championships.

“We’ve got a lot to prove,” Murray said. “We’ll be playing with an edge, with a chip on our shoulder.”

Catawba will start with a tough one — at West Georgia on Sept. 1.