Busch brothers will start on the front row at Bristol 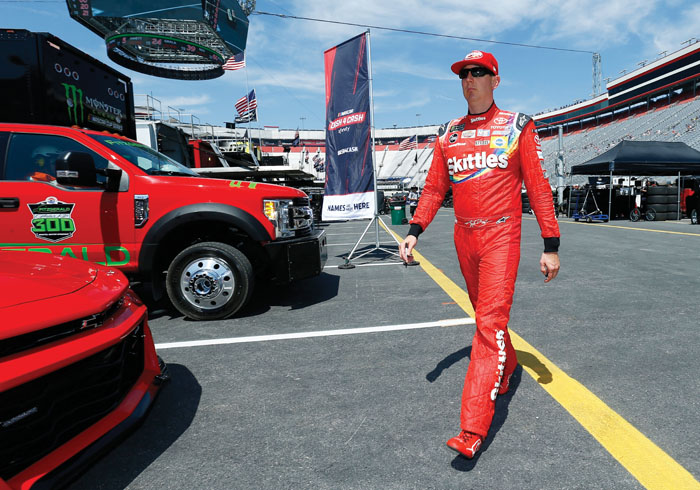 But as years have passed NASCAR’s iciest sibling rivalry has thawed a little bit, at least to the point where they can joke around a little bit.

Kurt Busch did just that Friday after Kyle Busch edged him out by 0.002 seconds to take the pole for the Cup Series race Sunday at Bristol Motor Speedway.

“I can walk up to him and say, ‘Yeah, I let you have it’ and he will giggle. He will actually laugh,” Kurt Busch said.

It marks the third time the Busch brothers have started on the front row together, and the first since 2013. In all three cases, Kyle started first and Kurt second.

“He always told everybody if you think I’m good, just wait for my younger brother,” joked Kyle Busch.

Kurt Busch said he messed up in turn one, which cost him a shot at a second straight Cup Series pole.

“If I am going to get beat by somebody if I don’t hit a perfect lap I would rather it be my little brother,” Kurt Busch said.

There was a time when the Busch brothers rarely spoke at all.

But Kurt Busch said they do communicate now.

“It’s better now with age,” he said of their relationship. “Like wine, it gets better with time. You let it settle.”

Last year the Busch finished 1-2 at Sonoma with Kyle Busch holding off his older brother. There is a chance that could happen again Sunday as they were clearly the two fastest cars in all three rounds of qualifying at the half-mile track.

“It was tough years ago for a few times, but lately I guess we have been racing each other a little better,” Kyle Busch said. “Overall we just need to keep trying to make sure they are good battles and clean battles and not ugly ones.”

Things to watch at the Cup Series race on Sunday:

FORDS DOMINATE: Kyle Busch had the only Toyota in the top 10.

He was followed by four Fords, with Brad Keselowski, Ricky Stenhouse Jr. and Ryan Blaney rounding out the top five. In all seven, Fords will start in the top 10.

HARVICK’S TOUGH BREAK: Kevin Harvick will have to start Sunday’s race at Bristol Motor Speedway at the back of the field after crashing in practice. Harvick’s suspension broke on a practice lap in the morning and his car took a right turn into the outside wall.

Under new rules installed this year Harvick will have to start at the back of the field because he went to a backup car.

“It definitely wasn’t a tire failure or anything like that, but just going in the corner as soon as I let off the gas it just hung a right, so it’s unfortunate but we’ll get another one out and do it again,” said Harvick, who is fourth in the NASCAR standings and has six top 10 finishes in seven starts.

WHAT HAPPENED THERE: Harvick has company with some other top drivers starting at the back of the field. Denny Hamlin will start 25th and Martin Truex Jr. 26th after failing to get out of the first round of qualifying.

TURN FOUR SLICK: The track was a little slick with several drivers having some trouble coming out of turn four.

KYLE BUSCH: ALL-STAR RACE RULES ‘NOT WHAT I SIGNED UP FOR’

“That’s not what I signed up to be a NASCAR driver for is to scrunch the field up and take the advantage away from those guys that are fast,” said Busch, last year’s All-Star race winner.

In its seemingly never-ending quest to make the All-Star race more competitive and create more passing opportunities, NASCAR announced this week it will test a different aerodynamic package at the May 19 event at Charlotte Motor Speedway by requiring cars to have restrictor plates.

Several recent All-Star races have featured one driver getting out in front of the field while running in clean air — and not being able to be caught.

The plates are used to choke horsepower and slow speeds, thus bunching up the crowd in an effort to make the race a little more exciting for fans.

That drew a groan from the often animated and outspoken Busch, who has 44 career Cup victories.

“I’m not sure that you can fabricate racing to being anything better than what exists, you know?” said the 32-year-old Busch. “People say how great it was back in the day, but you had two guys or three guys on the lead lap sometimes. Richard Petty would win races by two laps at places and now you have 25 cars on the lead lap and competition is as close as it’s ever been. People are complaining about it that there is a lack of competition. I don’t know what you expect to be competition — you want the last-place guy to be able to be the first-place guy. There’s always going to be a last-place guy.”

The aero package was used at an Xfinity Series race at Indianapolis Motor Speedway last year. There were record numbers of leaders, lead changes and green flag passes for the lead.

In an attempt to replicate that for next month’s All-Star race, each car will be fitted with aero ducts, a 6-inch-high spoiler with two 12-inch ears and a restrictor plate, among other modifications. Restrictor plates are used at Daytona and Talladega, the two biggest and fastest tracks on the schedule.

But he doesn’t want it to come at the expense of those who should be rewarded for the work they put in setting up their cars during the week.

“The fact of the matter is that we’re trying to orchestrate something that doesn’t quite exist,” said Busch.

, who is looking for his second straight Cup win on Sunday at Bristol Motor Speedway after capturing the checkered flag last weekend at Texas.

Busch joked that you simply can’t make everyone happy.

“Be miserable like me — and then nothing will surprise you,” Busch said, drawing a laugh from the room full of reporters. “I think if you wanted pink ice cream with white frosting on it, you would say, ‘Man, I really wish I had white ice cream with pink frosting.’ It’s just everybody wants the opposite of what they see and what they get.”