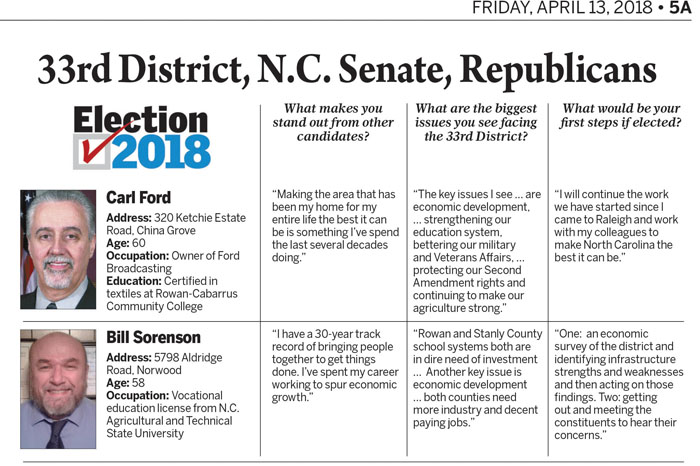 One of two new races for Rowan County voters this year is for the North Carolina Senate seat in District 33.

Previously, the county was split between Districts 25 and 34, represented by Sens. Tom McInnis and Dan Barrett, respectively.

Both men have filed for as candidates in their new districts: District 31 for Barrett and District 25 for McInnis.

Cathy Dunn, the Republican incumbent who represented the district when it included Davidson and Montgomery counties, is not seeking re-election.

Here’s what we know about the two Republicans on this year’s primary ballot:

Ford comes to the Senate race with years of experience in public office. He served on the Rowan County Department of Social Services board and the county Planning Board for more than nine years, collectively.

From 2008 to 2012, he was a Rowan County commissioner, with two years as vice chairman and two years as chairman.

He left the commission to run for a seat in the state House of Representatives for District 76, an office in which he has served since.

Ford opted to run for the Senate after redrawn House districts placed him in District 83 alongside fellow Republican Rep. Larry Pittman.

These issues are pertinent across the state, he said.

If elected, Ford said he will continue to “push forth the conservative agenda of cutting taxes, cutting red tape and government spending.”

“I will continue the work we have started since I came to Raleigh and work with my colleagues to make North Carolina the best it can be,” he said.

Asked how he is different from other candidates this year, Ford said he can relate to his constituents.

“I am a grandpa, a small business owner, and I just want to make my community better,” said Ford.

He said he has spent the past several decades making the area that has always been his home the best that it can be.

Ford said he has the perfect mix of experience and passion.

“I have the track record to prove that I will fight to keep more of their hard-earned money where it belongs, in their pockets,” he said. “… Every decision I make is well thought out and planned.”

Navy veteran Bill Sorenson, a newcomer to public office, said he was inspired to run by his experience as a public school teacher.

He has worked at South Stanly High School as a technology teacher for over 25 years.

Sorenson said he contacted senators and representatives, served on Gov. Pat McCrory’s Teacher Advisory Committee and met with past and present state superintendents with the hope to stop further destructive actions.

But nothing changed, said Sorenson.

“I simply could not sit idly by one day longer,” he said. “… Our state’s distorted fiscal priorities are hurting our children, creating shortages in teachers and other state employees, and breaking commitments to our retirees.”

Sorenson said both Rowan and Stanly counties’ school systems are in dire need of investment in both funding and resources.

He said an immediate need in the district is economic development.

“The district’s geographical location is helpful, but both counties need more industry and decent-paying jobs,” he said. “I will make drawing new businesses and industries to our district a consistent theme if elected.”

Other first steps if elected include a thorough economic survey of the district, meeting constituents and addressing school funding, kindergarten through university.

“The status quo has to go,” Sorenson said. “… Our state is underfunding education at every level, and the middle class and working poor are bearing the brunt of the burden.”

Asked what sets him apart from other candidates, Sorenson called himself a “unicorn of sorts.”

“I am not a career politician or businessman,” he said. “… I am an outsider as a candidate and, if elected, I will be an outsider in Raleigh advocating for all citizens.”

Voter registration deadline is April 13 for the May…