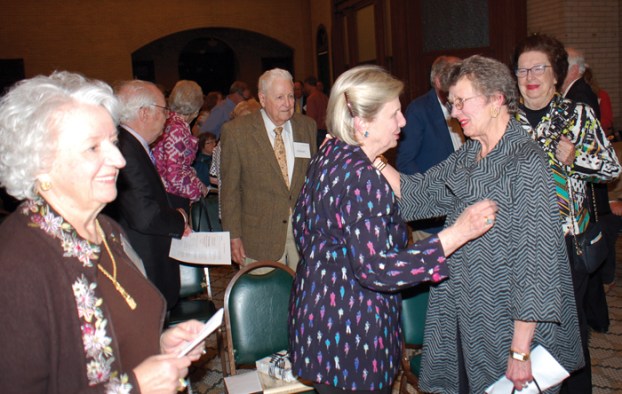 For someone who has served on the most distinguished philanthropic and corporate boards. For someone who has an honorary law degree from the University of North Carolina at Chapel Hill and once oversaw the UNC Center for Public Television.

For someone who has done all this and hasn’t lived in Salisbury since graduating from high school in 1954, Wyndham Robertson sure seems like a homebody.

Robertson, who lives in Chapel Hill today, delighted the audience with stories about her childhood in Salisbury, followed by her days in New York and Chapel Hill — places where she would brag about her hometown to anyone who would listen.

Her obvious affection for Salisbury made it difficult at Fortune magazine when she would try to pitch the idea to editors that the periodical needed to do a story on a grocery chain called Food Town, then later Food Lion.

“They would collectively sigh and tune me out,” Robertson said.

It wasn’t until after Robertson had left Fortune that the magazine recognized its previous oversight and wrote a feature story on the Salisbury-based grocer.

As Robertson also illustrated in many of her stories, no matter where she has lived or worked, many things ultimately had a Salisbury connection.

The house in which she lives in Chapel Hill was built by two Salisbury sisters of Archibald Henderson. The Robertson family’s Salisbury home on Confederate Avenue came from Henderson land.

Wyndham Robertson was writing a personal investing column for Fortune in 1968 when a friend introduced her to then-obscure Warren Buffett.

During her interview with Buffett, Robertson learned he had been college roommates with Salisbury’s Fred Stanback, who lived across the street from Wyndham in Salisbury and has been a lifelong friend.

Buffett, in fact, had been to Salisbury and knew all about Confederate Avenue.

From that time on, Buffet became an important source and friend for Robertson. He persuaded her to invest in a company called Blue Chip, which eventually morphed into Buffet’s Berkshire Hathaway empire.

“Think of Food Lion on steroids,” said Robertson, who would also serve on the Berkshire Hathaway board.

Robertson’s personal trainer in Chapel Hill is Doris Alexander, sister of Jake Alexander. There is a short list of Salisburians in Chapel Hill, Robertson said, but “of course, they are the best people.”

The youngest child of Blanche and Julian Robertson Sr., Wyndham Robertson graduated from the celebrated Class of 1954 at Boyden High School in Salisbury.

Noted preservationist Ed Clement said Thursday he’s sure plenty of men from that class established distinguished careers, but it was many of their women counterparts who would go on to be celebrated in fields such as medicine, history, politics and journalism.

And one of those women is Wyndham Robertson, a cheerleader at Boyden High and co-editor of the school newspaper, the Yellow Jacket. Robertson broke some glass ceilings for women in journalism through her rise over 25 years at Fortune.

She flourished as a researcher, writer and a member of the board of editors, and she was eventually the first woman named assistant managing editor. That was before a separate and remarkable career in education as vice president of communications for the 16-campus UNC system.

Robertson was inducted into the North Carolina Hall of Fame in Journalism, Advertising and Public Relations in 2013 and was awarded an honorary doctor of laws degree from the University of North Carolina in 2015.

Robertson said Thursday night one of her best life decisions was to attend Hollins, located in Roanoke, Virginia. But her main reason for going there wasn’t the best: The Hollins snack bar had a footlong hot dog that was better than Al’s Night Hawk in Salisbury, she said.

Robertson attended her early grades at Frank B. John School, and she called it “an enchanted place.”

Her family’s Salisbury phone number was three digits — “803” — and the Stanbacks’ across the street was simpler — “69.”

Robertson’s mother took the kids in their pajamas to see President Franklin D. Roosevelt’s funeral train when it stopped in Salisbury to trade crews in April 1945. As a kid, she said, she couldn’t understand why no one really emerged from the train, but she was delighted when the Roosevelt dog walked out and relieved himself.

She was on the Square celebrating with everyone else the end of World War II later that year, with her brother Julian honking the Buick’s horn.

Wyndham Robertson banked at the Scottish Bank in Salisbury, and she had difficulty in New York cashing her Scottish Bank checks. A local liquor store became the only place she could cash her Salisbury checks for a time.

Blanche Robertson, her mother, was a founding member of Historic Salisbury Foundation, and Wyndham considered her a visionary in preservation for her time. It is the Blanche and Julian Robertson Sr. Family Foundation that Julian Robertson Jr. and the rest of the family established for the benefit of Salisbury and Rowan County in the late 1990s.

Wyndham Robertson has been a board member of the foundation, allowing her to revisit her hometown often.

As she said, there’s no escaping Salisbury.

A report on Historic Salisbury Foundation’s business portion of its annual meeting will come Saturday. Contact Mark Wineka at 704-797-4263.

SALISBURY — Everyone should have an “A team,” and Sandra Roakes says hers includes Betsy Cunningham and Lyndia Heward. Tuesday... read more