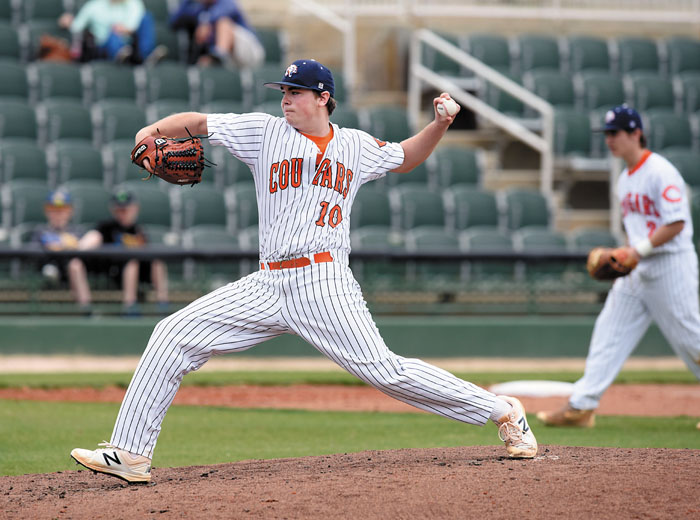 CHINA GROVE —  Maddux Holshouser would be the ace for 95 percent of the high school teams in North Carolina.

He’s only the No. 2 guy at Jesse Carson High, where South Carolina commit and potential MLB draft pick Owen White hangs out, but Holshouser has embraced his supporting role and he’s run with it.

“Owen is a great teammate as far as helping me and pushing me to be better,” Holshouser said. “I actually was ahead of him in strikeouts until recently. Right now, he’s got 53 and I’ve got 52. It’s friendly competition.”

Those stats are accurate. Those stats may surprise people, but Holshouser has come a long way. The left-hander’s strikeout totals keep climbing. His walk rates and hits allowed rates keep dropping. He’s become a legitimate ace in his own right, and he’ll continue his pitching career and education at the Division I level for the UNC Greensboro Spartans.

Holshouser was announced as one of the seven pitchers in a 12-man recruiting class by UNCG head coach Link Jarrett back in the winter months, but Carson saluted Holshouser on Thursday with dozens of classmates, teammates, coaches and family in attendance.

Holshouser is 15-6 in three years as a starter for the Cougars. His next victory will put him in third place all-time at Carson behind White and Dillon Atwell. Holshouser has 128 strikeouts. That’s currently fifth in school history, and he’ll probably end up second only to White.

Holshouser’s story actually starts before he was born. His father, Jeff, is a Salisbury-Rowan Hall of Famer, whose best sport was baseball. A North Rowan graduate,  Jeff struck out 223 batters for Rowan County American Legion teams in the mid-1980s and still ranks in the top 10 all-time for the storied program. Jeff’s catcher on Rowan County’s 1984 state champions, coached by Joe Ferebee, was Chris Cauble, who is now Carson’s coach. It’s a small world.

“Jeff and I grew up in the same church and we’ve been friends for as long as I can remember,” Cauble said. “He was dating Dawn, Maddux’s mother, back when we were playing Legion ball together, so I’ve known her for many years as well. I’ve known Maddux since the day he was born, and it’s been a pleasure to watch him grow into such a fine young man. It’s been a thrill to coach him and to see him sign with a good D-I program.”

Maddux’s older brother, Travis, was a solid pitcher at North Rowan, threw for Rowan Legion and was on the team at Pfeiffer.

Maddux was groomed to be a pitcher from the time he was named after Greg Maddux, his father’s favorite player. He was specifically prepared to be a southpaw.

“When I would pick up a ball with my right hand as a kid, my dad would take it out of my hand and put it in my left hand,” Maddux said. “He really wanted me to be a left-handed pitcher, and I’m glad he did. He’s always pushed me to be my best, and I’ve always tried to live up to what he did.”

Maddux’s fastball is 82-85 mph. For a right-hander, that’s normally not  enough velocity to attract D-I attention, But for a lefty, it’s plenty. Lefties usually have movement that makes them hard to hit, and Maddux’s fastball has plenty of life. He also has an advanced curveball and changeup for a high school hurler.

Maddux was a bat boy for North Rowan baseball not long after he was strong enough to haul a bat to the dugout. By the time he was at Southeast Middle School, he was showing promise as a pitcher.

He made his first impact for Carson’s varsity as a sophomore.

“He was this little guy who didn’t have a lot of velocity, but he was getting people out with movement and with that curveball and changeup,” Cauble said.

Holshouser gave up a lot of hits (56 in 46 innings) as a sophomore and walked more batters than he struck out. His ERA was 3.80, not great for high school. He still managed a 5-2 record on a strong team.

The turning point for Holshouser came during his junior year.

“Early that season, he was trying to throw harder, trying to get his velocity up there for the college coaches,” Cauble said. “But what was happening was that as he threw harder, he was losing some of that natural lefty run he had. He was getting hit around a little bit by some good clubs in the South Piedmont Conference. But the second half of that season it started to click for him.”

“I just got a better feel for my pitches,” Holshouser said. “If I had good location, my ball moves enough that the strikeouts were going to come. I realized locating was a lot more important than a little more velocity.”

Cauble said Holshouser’s best game as a junior came in the SPC tournament championship when he shut out a good South Rowan squad. He was 6-3 for the season with a 1.96 ERA. He had almost twice as many strikeouts as walks, had fewer hits allowed than innings pitched and made the All-SPC and All-Rowan County teams.

Holshouser’s development continued after the season with the elite South Charlotte Panthers showcase team. He also continued to get stronger, huskier and tougher mentally from pitching against challenging lineups in college stadiums.

As a senior, Holshouser might be the county’s second-best pitcher. His velocity has taken another nice jump, but he’s been able to maintain the good movement. His stats have been tremendous. He’s allowed only 16 hits and 12 walks in 33 2/3 innings, while striking out 52. He’s 4-1 with a 1.04 ERA. The loss came early to Myers Park, a 16-1 4A team, and even in that one, Holshouser was very stout. He allowed one earned run in six innings while striking out 11.

He hasn’t been especially lucky. He threw seven shutout innings with eight strikeouts against Robinson but got no decision. The only time this season in which he’s struggled was the Mount Pleasant game in the Easter Tournament at Intimidators Stadium. He gave up seven hits in that one but still battled into the sixth inning and earned the win.

“My confidence has grown some,” Holshouser said. “I’m walking a lot fewer people, and that’s important, because walks are usually runs. In my mind, I believe if I make my pitches, I’ll get outs.”

Holshouser wasn’t certain he would get a chance to be a D-I pitcher until last summer. He had offers from Division II schools Wingate and Winston-Salem State, but then UNC Greensboro saw him pitch in a tournament and charged after him. UNC Greensboro had a lot to offer. The program is on the rise — 2017 Southern Conference Tournament champs and 24-8 this season.

Holshouser plans to major in business or finance.

Holshouser is a good enough athlete that he’s been the starting first baseman for the Cougars the last two seasons when he’s not pitching. He has a reliable glove and a decent bat, but he’ll obviously be focused exclusively on pitching in college.

The immediate task for the Cougars is to win the North Piedmont Conference, their new league. Carson is 5-0 in the league heading into tonight’s action against North Iredell and is  13-4 overall. Carson has won 12 of its last 13 games. The only loss in that stretch was to 4A West Forsyth.

The Cougars are confident they can make a run in the  3A playoffs this year. With White, followed by Holshouser, they should be a tough out.

“I’ve played with Maddux since we were in middle school, he’s gotten good, and he keeps getting better,” Carson slugger Luke Barringer said. “When he takes the mound, we’ve got as much confidence in him as we do in anyone.”