Ohtani still getting it done for LA Angels 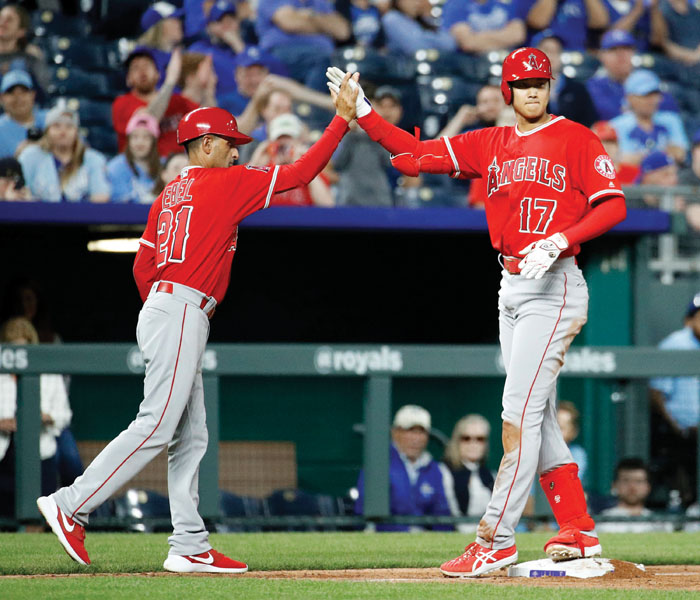 Ian Kinsler homered on his first swing in his return to the Angels’ lineup, and Nick Tropeano (1-0) pitched shutout ball into the seventh for his first major league win since 2016.

Ohtani drove a 1-2 pitch from Brandon Maurer to right-center, scoring Kole Calhoun, Andrelton Simmons and Luis Valbuena. The Royals walked Ohtani intentionally in the sixth with first base open and Simmons on second.

Ohtani is tied with Mike Trout for the Angels’ lead with 11 RBIs in 26 at-bats. Trout went 3 for 4 with his fifth home run and has 55 at-bats.

Kinsler led off the game with a home run for the 47th time in his career, driving a 1-0 pitch from Ian Kennedy (1-1) out to left. Kinsler missed the previous 11 games with an adductor strain.

Tropeano, making his first big league appearance since July 18, 2016, limited the Royals to six hits over 6 2/3 scoreless innings. He had elbow surgery in August 2016 and missed last season.

Kennedy was removed after six innings and 100 pitches. He allowed seven hits but just the one run on Kinsler’s homer.

The Royals, who have lost eight of 11, have scored a total of 32 runs — and 10 of those came in Monday’s victory over Seattle.

Porcello stayed in after a 45-minute rain delay and was working on a no-hitter before Aaron Judge’s leadoff double in the seventh. The 2016 AL Cy Young Award winner struck out six and walked none in his third straight win to begin the year.

Andrew Benintendi and Mitch Moreland each had two hits and drove in a run.

It was more than enough offense for Porcello (3-0), who returned to the mound after the delay and put the Yankees down in order in the sixth.

Craig Kimbrel got three outs for his fourth save.

CINCINNATI (AP) — Jose Martinez drove in six runs and Yadier Molina homered in his return from a one-game suspension, powering St. Louis to a victory that left Cincinnati mired in its worst start since 1955.

The Cardinals homered a season-high four times while piling up a season high in runs. The Reds helped by walking 11 batters, three of them with the bases loaded.

The Reds fell to 2-10, the worst record in the majors and their worst start since an identical mark in 1955.

CHICAGO (AP) — Gregory Polanco homered twice to help back a third straight solid start by Trevor Williams, and Pittsburgh pulled away from Chicago.

Francisco Cervelli lined a three-run shot in the seventh off Cubs reliever Justin Wilson as Pittsburgh scored four times in the inning to break open a tight game. Adam Frazier also went deep for Pittsburgh, which improved to 9-3.

Chad Bettis (2-0) allowed one run and three hits over seven innings as Colorado took the opener of a four-game series.

He provided most of the offense, starting with the game’s first at-bat.

The Rockies managed another run in the first when Washington second baseman Howie Kendrick misplayed Ian Desmond’s two-out pop up and allowed Chris Iannetta to score from second.

LeMahieu added an RBI double in the second off Gonzalez (1-1). In the sixth, he smacked a two-run homer to center off reliever Matt Grace to make it 5-1.

CLEVELAND (AP) — Francisco Lindor hit a leadoff homer and drove in three runs, helping Cleveland to its 11th consecutive victory against the Tigers.

The Indians completed a four-game series sweep and improved to 31-10 against their AL Central rival since 2016. Jose Ramirez hit a two-run homer, and Trevor Bauer (1-1) struck out seven while pitching seven innings of two-run ball.

Lindor, who entered the night batting .184 with one RBI, hit his fourth career leadoff homer off Michael Fulmer (1-2). He added a two-run double in the second and also scored three of Cleveland’s season-high nine runs.

Jason Kipnis and Bradley Zimmer each had three hits for the Indians. Kipnis added two RBIs and Zimmer robbed Dixon Machado of an extra-base hit with a diving catch in the seventh.