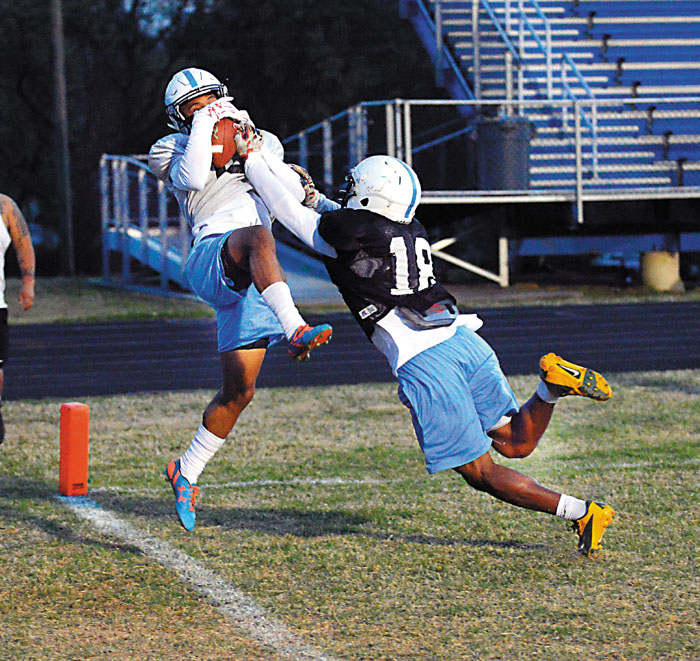 SALISBURY — An 0-10 football season will definitely make one hit the reset button.

That’s what Livingstone head coach Daryl Williams is doing and his team wrapped up spring practice with an offense/defense scrimmage Friday night at Alumni Memorial Stadium.

“We’ve  kind of restarted,” Williams said last night, just before the action began on the field. “We let some guys go and quite a few junior college guys joined us in January. We also have some freshmen who sat out last year (red-shirt). We’re going to be freshmen heavy — with a lot of them playing next year — and I’m excited about it.”

One of the newcomers was the center of attention last night — former North Rowan star Alexis Archie, who comes back home from Feather River Junior College in California. Archie took all the reps at quarterback during the spring game, due to injuries to the two returning QBs — Xavier Longerbeam and Thaddeus Bell.

The scrimmage was pass heavy and Archie threw a touchdown pass to sophomore running back Anthony Faraimo. Archie also had to hurry many throws, as rising senior Armond Cox, an All-CIAA caliber defense end, wreaked havoc for the youngsters on the offensive line.

“He (Archie) has a long way to go because he really hasn’t played a lot of football in two years,” said Williams. “At junior college, he really didn’t play much … so he has to shake some rust off, but he’ll be ready in the fall and we’ll be able to see what he can do with the entire offense.”

Archie threw to two eye-catching newcomers at wide receiver — transfers Corey Hall and Destin Derby. Both are big targets and Hall, at 6-5, really stands out. Halls caught some passes but Derby went out early with an apparent knee injury.

“We are much bigger at receiver and Hall is starting right now, coming out of spring practice,” said Williams. “He has progressed real well for us.”

Former Salisbury star Justin Ruffin, who started at times last season, saw action Friday night at running back. He was joined in the backfield by newcomer D.J. Bethune.

Williams was very excited about two new tackles on the offensive line — both with good size — Jason Monroe and Jason Garrett.

Standing out on the defensive line, along with Cox, was 6-3, 220-pound Anthony Mullis.

Mullis is the son of Livingstone great Ben Coates, a tight end who went on to a solid career in the NFL, mainly with the New England Patriots. Coates played in two Super Bowls, winning a ring with the Baltimore Ravens in 2001. He was on the Patriots’ team that lost to Green Bay in the 1997 Super Bowl.

Mullis signed with Elon, after an outstanding career at Central Cabarrus High School, but has transferred to Livingstone.

All in all, Williams and the Blue Bears were just happy to be looking ahead and leaving the sour taste of 2017 behind.

“Spring ball has gone pretty good,” Williams added. “We’re not going to get the full 15 practices in, but we’ve seen what we needed to see and we’re going to try and finish up on a good note. I think the guys are coming along well. We’ve slowed it down and taken off the pads and really worked on our fundamentals, making sure we have a good base down for the fall.”

Coach Curtis Walker’s Indians are coming off a 9-2 season in 2017, including a victory over Division I VMI.

See Sunday’s Salisbury Post for a report on Catawba’s battle of the Blue and White.