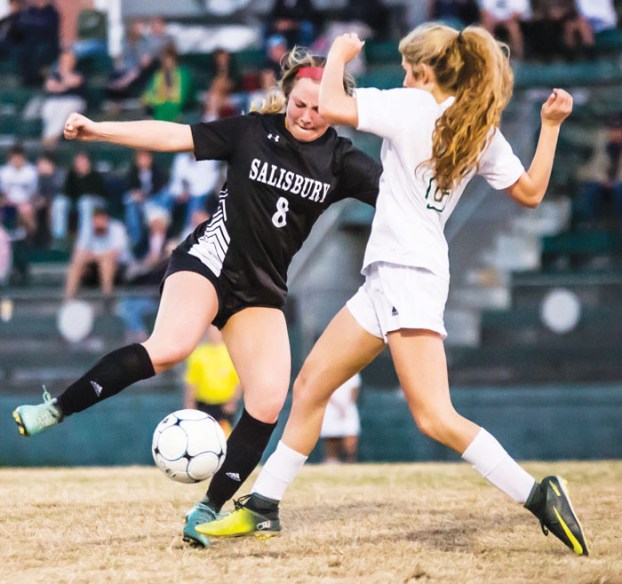 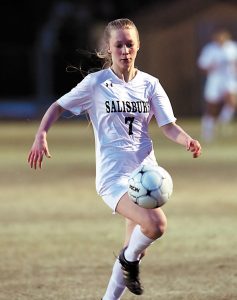 Salisbury’s Freya Obermueller (7), shown in an earlier match this season, scored both goals in Thursday night’s win at West Davidson … File photo by Wayne Hinshaw, for the Salisbury Post

The Lexington Dispatch
TYRO — West Davidson got a second shot at undefeated Salisbury on Thursday evening and the Dragons were within seven minutes of accomplishing their objective.
But, in the end, they were left heartbroken as Salisbury left the Tyro Middle School field with a 2-1 overtime victory and a hammerlock on first place in the Central Carolina Conference.
Freya Obermueller, an exchange student from Germany who missed Monday’s game between the two teams, scored both goals for Salisbury, including the equalizer when it looked like West would win and the game-winner with 5:25 left in the second 10-minute overtime period.
“This is probably a tough one to swallow,” said West coach Chris Brown. “You tip your hat to them, but I credit my kids. They didn’t show up in the first game when we got beat 3-1. We didn’t show up and we were very intimidated. I think we showed up tonight. We played hard and we put ourselves in position to win the game.”
No one was more cognizant of that than Salisbury coach Matt Parrish. He knew how close it was.
“We have not faced that much adversity so far this year,” Parrish said. “We have only trailed in a game once. That’s the will of a team. … I don’t know. They dug deep.”
And they now have the wind at their backs in the CCC.
Salisbury, 14-0 overall, is 12-0 in conference play. There are six conference games remaining, but the Hornets have given up just eight goals all season. They’ll be heavily favored the rest of the way.
“We knew this game meant that opportunity,” Parrish said. “It’s unfortunate with the way the schedule worked that the only team we had to postpone was West Davidson. Two undefeated teams playing twice in three days. I’m glad we survived.”
It nearly went the other way.
The teams were battling in a scoreless draw when West sophomore midfielder Mia Davis stunned the Hornets by blasting in a 40-yard free kick, following a foul. The ball arced over the outstretched arms of goalkeeper Emily Mann and into the back of the net with 18:55 remaining.
West kept it in attack mode, but the Hornets applied their own pressure, with Julia Honeycutt forcing Dragons’ keeper Haley Lowe into a difficult save.
Obermueller, who was visiting her parents in New York City earlier in the week, got loose on a breakaway with time ticking away. Lowe came out of the net to challenge her and Obermueller lofted it over the West keeper to tie the game with 7:05 left.
Davis took a corner kick with about 30 seconds left in regulation but Mann snagged the ball before anyone else could touch it.
The action was fast and furious in the first 10-minute overtime period. Lowe had to make three difficult saves in less than a minute.
West had is own chance with two minutes remaining when Kailyn Owens got slightly behind the Salisbury defense. But she couldn’t quite control the ball and Mann came out of the net to smother it.
Obermueller broke through again in the second overtime period with what proved to be the game-winner.
“She gives us a change of pace,” Parrish said. “Caroline Cardelle did a fantastic job in the first game, but Freya is fast. They’re kind of like our yin and yang.”
Salisbury nearly made it a two-goal lead when Julia Honeycutt’s shot hit the left post with 3:47 remaining.
The Dragons might wonder about the what-ifs.
Late in the first half, Owens beat the defense and Mann had to come out of the net in the middle of the scrum. That left the net wide open when Owens sent in a shot. The Hornets’ Olivia Dagenhart managed a kick save with 2:24 left in the half to keep the game scoreless.
“There wasn’t a whole lot of pace on the ball,” Brown said. “She had plenty of time to get to it. But, yeah, nice save by her. It’s tough. Our kids left it all on the field. Theirs did, too. Great fan base tonight. Cool atmosphere.”
West fell to 11-2 overall and 9-2 in the CCC. The Dragons are now a half-game behind South Rowan for second place in the conference. West hosts North Davidson on Monday at 6 p.m.
Mike Duprez can be reached at (336) 249-3981, ext. 218 or sports@the-dispatch.com. Follow Mike on Twitter@LexDispatch_md.
You Might Like