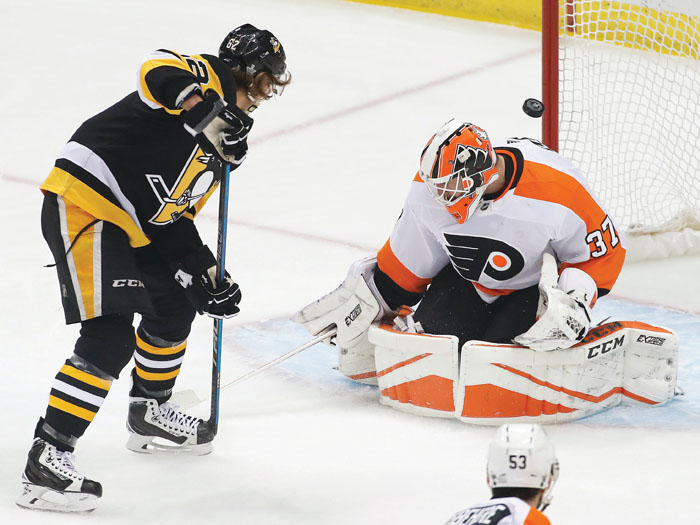 PITTSBURGH (AP) — The sluggish opening three months. The so-so finish. The only occasional attention to detail on defense. None of it matters anymore.

The playoffs are here. The champs are, too.

Sidney Crosby and the Penguins provided proof in Pittsburgh’s 7-0 dismantling of the Philadelphia Flyers in the opening game of their first-round series Wednesday night.

Crosby performed more stick wizardry on his way to his third postseason hat trick, Evgeni Malkin added a highlight-reel goal of his own and the Penguins overwhelmed their seemingly overmatched cross-state rivals to begin their quest for a third straight Stanley Cup with a blowout that seemed to indicate the grudge match could be a mismatch.

Not that Pittsburgh’s captain wanted to buy into any sort of message sending, even after the Penguins became only the fifth team in NHL history to win a series opener by at least seven goals.

“I mean, it’s one game,” Crosby said. “Whether it’s 7-0 or 1-0 or double overtime, it’s one game. A big part in the playoffs is to get better every game and to adjust, and that’s the way we have to look at it.”

That might be a frightening proposition for the rest of the NHL. It certainly is for the Flyers, who have lost all five meetings with Pittsburgh this season, giving up at least five goals each time. Nothing that happened during the regular season, however, compared to Wednesday night. The Penguins pumped five goals in the first 29:01 to chase goalie Brian Elliott, and the Flyers simply could not keep pace.

“It was one of the worst games I’ve been a part of,” Flyers forward Claude Giroux said.

Philadelphia coach Dave Hakstol mercifully pulled Elliott after Crosby swatted Brian Dumoulin’s point shot out of the air and knocked it by a stunned Elliott to put the Penguins up 5-0 just before the game’s midway point. Elliott stopped 14 of 19 shots before being replaced by Petr Mrazek. Mrazek made 12 saves, but Hakstol indicated he’s likely to go with Elliott again in Friday’s Game 2.

Whoever is in net for the Flyers, it won’t matter if the play in front of them isn’t better. Philadelphia’s power play went 0 for 4 and didn’t even generate a shot.

“They beat us from pretty much every aspect tonight, starting from the net out,” Elliott said. “Everybody just has to be better.”

WINNIPEG, Manitoba (AP) — The Minnesota Wild lost the puck and the lead — and eventually Game 1.

Patrick Laine tied it at 4:51 of the third period off the turnover, defenseman Joe Morrow scored with 6:13 left and the Winnipeg Jets beat the Wild 3-2 on Wednesday night for the first playoff victory in franchise history.

“It’s nice to have won one now because that was kind of what people talked about before — this team has never won a playoff game, they’ve only been there twice,” said Bryan Little, who joined the team in 2007-08. “It’s nice to get that off our backs and, hopefully, we get a lot more.”

In the franchise’s only other playoff appearances since joining the NHL in 1999 in Atlanta, the club was swept in 2007 by the New York Rangers and 2015 by Anaheim.

“We had an opportunity with the lead in the third period and our goaltender playing good, we thought we had a chance to win,” Minnesota coach Bruce Boudreau said. “You can’t give No. 29 (Laine) a chance right down the slot to score on a turnover. You’re looking for disaster there.

“It was a bad turnover. When you turn the pucks over in the middle of the ice. He deked our player, we didn’t hold the middle, and he got to come right down Main Street.”

Nikolaj Ehlers set up Morrow at the point for a one-timer that beat goalie Devan Dubnyk.

“I’ve had a major roller-coaster of an NHL career so far,” the 25-year-old Morrow said. “To have a little, I don’t even know if you want to call it a Cinderella story of a night tonight, it makes you feel good. It makes all of the bad times and all of the times you’ve battled so hard to try and get an opportunity, it makes them go away. It washes them away and you get to enjoy it in front of a crowd like this and a city like this.”

Morrow was acquired at the trade deadline from Montreal in exchange for a fourth-round draft pick.

“Awesome to see a guy step in, new to the team a little bit, and have a huge effect,” Jets captain Blake Wheeler said. “He’s fit in seamlessly with our group. For a guy like him it’s tough, because he’s never really had an established role. Somebody who’s kind of on the outskirts, or in and out a bit.”

Mark Schiefele added a power-play goal, and Connor Hellebuyck made 18 saves for the Jets.

Game 2 is Friday night in Winnipeg.

Laine tied it at 2 at 4:51 of the third period, putting a high wrist shot past Dubnyk on the glove side.

Winnipeg outshot Minnesota 13-4 in the scoreless first period. Dubnyk had to make a couple of big saves in the last three minutes, including a pair from close in by Dustin Byfuglien and Andrew Copp.

The Jets had the game’s first power play 24 seconds into the middle period after Minnesota’s Eric Staal was called for tripping.

Dubnyk made a save on a blast from Scheifele, while two of Laine’s trademark blasts from the right circle went wide of the net and the other was blocked by Nate Prosser’s arm.

Byfuglien was sent to the box six minutes later for roughing and Minnesota put a few shots at Hellebuyck, but it was the Jets who capitalized on their second chance with the man advantage.

Twenty seconds after Prosser was called for holding, Blake Wheeler sent a pass to an open Scheifele in the slot for his one-time at 17:37.

The Wild outshot the Jets 12-8 in the second.

Cullen took a backhand pass from Jordan Wheeler and beat Hellebuyck on the blocker side at 1:46 of third period to tie it.

Parise quickly put the visitors ahead at 3:58 on a 2-on-1 with Mikael Granlund after a Winnipeg turnover.

“We were able to give ourselves a chance a grab a lead there and even when it’s tied we were still in good shape,” Parise said. “I don’t think (we took our foot off the gas). …. They were aggressive all over the ice. I think when we didn’t get it behind them. That’s when we let them keep coming back at us.”

Connor Hellebuyck made 18 saves for the Jets, who finished second overall in the NHL and Central Division with 114 points (52-20-10).

Matt Cullen and Zach Parise scored for Minnesota. Dubnyk stopped 37 shots for the Wild, who were third in the division with 101 points (45-26-11).

Minnesota is competing in its sixth straight post-season. Last year, the Wild lost their first-round series to St. Louis in five games.

Fans are primed for these playoffs. The “whiteout” crowd of more than 15,000 were chanting “Go Jets Go” and waving white towels before the puck even dropped. Next door to Bell MTS Place, a block was closed for a street party, highlighted by the game shown on two giant screens for fans in the NHL’s smallest market.

Jets forward Mathieu Perreault left in the second period with an upper-body injury and head coach Paul Maurice had no update.

The Flyers stressed the need to stay out of the penalty box and put together three disciplined, competitive periods if they wanted to put an abrupt halt to Pittsburgh’s run at history. It didn’t happen. Not even close.

The Penguins jumped on Philadelphia early. Elliott stopped Kris Letang’s slap shot with his blocker only to see the long rebound go right to Rust, who ripped it over Elliott’s right shoulder to give the Penguins the lead 2:38 into the game.

Philadelphia’s best chance at staying in it came minutes later, but Scott Laughton whiffed on his first attempt from the doorstep and Murray made a sprawling glove save on Laughton’s second try to preserve Pittsburgh’s lead.

“If that goes in, it’s 1-1 and maybe we’re talking about a different result,” Crosby said.

Moments later, Hagelin expertly redirected Patric Hornqvist’s shot past Elliott 10:07 into the game. Malkin drew a hooking penalty to negate a Pittsburgh power play, and when he emerged from the penalty box, he whizzed past three Flyers in one sequence, darting by Jakub Voracek, slipping past Giroux and then fending off Shayne Gostisbehere before flicking a backhand past Elliott to put the Penguins up 3-0 before the series was 15 minutes old.

All that before Crosby got involved.

The two-time MVP has a knack for scoring in unorthodox ways. He beat Montreal’s Carey Price with an intentional double-deflection and smacked a rebound out of air in overtime to top New Jersey within a span of eight days last month.

His first of the playoffs was just as impressive and provided the exclamation point on a night Pittsburgh looked every bit the threat to become the first team since the New York Islanders of the early 1980s to capture three straight Cups.

NOTES: Crosby’s hat trick tied Pittsburgh owner and Hall of Famer Mario Lemieux for the most postseason hat tricks in franchise history. … Murray hasn’t allowed a goal since Game 4 of the 2017 Stanley Cup finals, a span of 206:26. … The Penguins, who had the league’s top-ranked power play during the regular season, went 1 for 4 with the man advantage. … Pittsburgh C Derick Brassard, who missed time late in the regular season with a lower-body injury, had an assist in 13:44. … Injured Steelers LB Ryan Shazier, who is recovering from spine stabilization surgery and has already been ruled out for the 2018 season, stood up and led the sell-out crowd in a pre-game cheer.