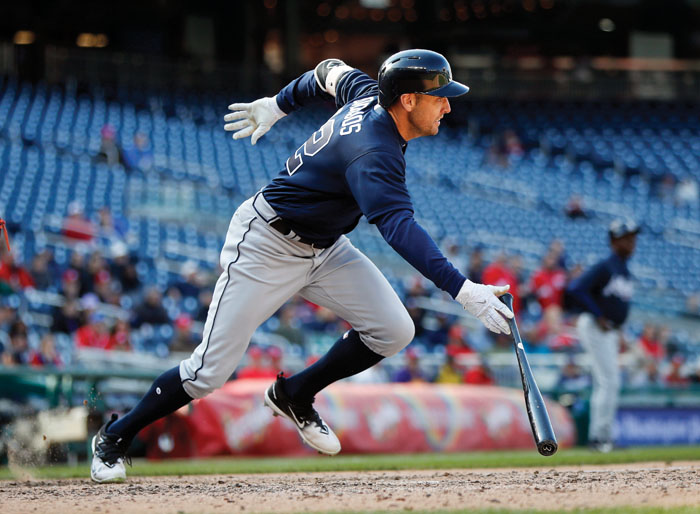 Atlanta Braves Peter Bourjos (12) drops his bat after hitting a single scoring two runs against the Washington Nationals to take the lead in the 12th inning of a baseball game at Nationals Park, Wednesday, April 11, 2018 in Washington. Atlanta won 5-3 (AP Photo/Pablo Martinez Monsivais)

WASHINGTON (AP) — Peter Bourjos began the game on the bench for the Atlanta Braves. Didn’t get in until the seventh inning. He made quite a contribution, nonetheless.

Bourjos threw out a runner at the plate shortly after taking over in left field, then drove in two runs with a bases-loaded single in the 12th. Atlanta’s bullpen finally made a lead stand up, helping the Braves beat the Washington Nationals 5-3 Wednesday after starting pitcher Brandon McCarthy left with a hurting left shoulder.

“He’s the player of the game and gets a little cameo at the end,” Braves manager Brian Snitker said about Bourjos. “Good for him. Both were huge plays.”

There were many of those on a lengthy afternoon. Two homers by Atlanta catcher Kurt Suzuki (who used to play in Washington), in the fourth and 11th innings. A failed steal of home by Ender Inciarte with Suzuki batting to end the 10th. Two blowns saves by Braves relievers, including when Arodys Vizcaino allowed Matt Adams’ tying homer in the bottom of the ninth.

The good news for Atlanta, aside from the victory, was that McCarthy and Snitker both said they expect the righty to be able to make his next start.

McCarthy’s shoulder was popped back in its socket on the field by a trainer.

“One of those weird things,” the skipper said. “He was fine when he came back in.”

Snitker used two words to describe this victory, which allowed his club to avoid a three-game sweep: “satisfying” and “draining.”

So try to imagine how the Nationals felt after rallying from deficits of 2-1 entering the bottom of the ninth and 3-2 going into their half of the 11th.

Bourjos delivered the go-ahead hit off Ryan Madson (0-1) with one out in the 12th. Madson, working for the fourth time in five days, began what he termed “a hectic inning” by allowing consecutive singles and a walk.

“Doesn’t feel like the ball’s as clean coming out, maybe. Doesn’t feel like you have the zip. Might be a little flat. Maybe a little bit easier for the hitter to see,” Madson said of what can happen with a heavy workload. “But I’m not blaming any of that.”

Rookie Shane Carle (2-1), Atlanta’s seventh pitcher, threw the last two innings for the win. He blew a save chance in the 11th, giving up Howie Kendrick’s two-out double to make it 3-all.

Bourjos entered in left as a defensive replacement in the bottom of the seventh and ended that inning by throwing out Adams as he tried to score from second.

Adams’ take? “I’m not the fastest guy out there.”

Nationals manager Dave Martinez had no issue with third base coach Bob Henley’s send of Adams, saying: “I trust Bobby over there at third base. I really do.”

In the 10th, with Nationals closer Sean Doolittle on the mound, Inciarte walked, stole second, moved to third on a double steal and then tried to complete his trip around the bases with another swipe. But on this one, Doolittle heard third baseman Anthony Rendon and catcher Pedro Severino alerting him to what was going on and threw home in time for Severino to make the tag.

“I knew exactly what they were yelling about,” Doolittle said.

The umpire’s call of out stood after a replay review.

“It was (Inciarte’s) decision (to go) and it looked pretty good,” Snitker said. “I thought he was safe.”

DENVER (AP) — Rockies star Nolan Arenado charged the mound after a fastball from Luis Perdomo sailed behind him, setting off a brawl that resulted in five ejections during Colorado’s 6-4 win over the San Diego Padres on Wednesday.

Pedromo flung his glove at the rushing Arenado and missed. The big-hitting Arenado then threw a couple of punches at the backpedaling Perdomo but didn’t land anything squarely.

Arenado’s reaction in the third woke up the slumbering Colorado bats, with the Rockies scoring five times in the inning to take a lead it wouldn’t relinquish.

Antonio Senzatela (1-1) won, and Wade Davis pitched a perfect ninth for his fifth save. Buddy Baumann (0-1) was the loser.

MINNEAPOLIS (AP) — Max Kepler hit his second home run of the game, connecting for a solo drive with two outs in the bottom off Brad Peacock (1-1) as Minnesota rebounded after wasting an 8-1 lead.

Lance McCullers Jr. allowed a career-high eight runs in 3 2/3 innings for the Astros. He gave up seven hits, tied a career high with six walks and struck out six.

Houston’s Alex Bregman had a career-high four hits, including his first homer of the season.

Down 8-6, the Astros loaded the bases with one out in the ninth against Fernando Rodney (1-1). George Springer grounded into an RBI forceout, and the tying run scored when Dozier threw wide to first trying for a double play.

ST. LOUIS (AP) — Matt Albers got his first save for Milwaukee, retiring Kolten Wong and Dexter Fowler to strand a pair of runners.

Milwaukee built a 3-0 lead on home runs by Hernaz Perez in the second and Eric Thames in the third followed by Jonathan Villar’s RBI groundout in the fifth.

Junior Guerra (1-0) allowed one run and four hits in 5 1/3 innings in his first start this season. Adam Wainwright (0-2) gave up three runs and eight hits in seven innings.

CHICAGO (AP) — Matt Davidson hit a two-run homer off Austin Pruitt (1-2) in the eighth inning and Chicago improved to 1-5 at home, matching its worst home start since 1975 at Comiskey Park.

Bruce Rondon (1-0) retired the side in the eighth, and Nate Jones finished for his first save.

James Paxton matched a career-best with 10 strikeouts over six sharp innings before turning it over to his bullpen. Nick Vincent (1-0) worked a perfect seventh, and Edwin Diaz got three outs for his fourth save.

BALTIMORE (AP) — The Baltimore Orioles finally put on an offensive show at Camden Yards, one that manager Buck Showalter hopes will be repeated many times this summer.

Limited to seven runs in their first five home games of the season, the Orioles got off to another slow start before finally getting their slumbering offense on track.

Baltimore amassed 11 hits after the third inning, including two by Chris Davis, who entered with a .081 batting average.

“Some better at-bats,” Showalter said. “I hope it’s kind of coinciding with a little warmer weather.”

Game-time temperature was a far-from-toasty 58 degrees, but that was still warmer than the first games of the series, in which the Orioles totaled two runs and were held hitless until the eighth inning on Tuesday night.

In this one, Baltimore managed only a walk through three innings. In the fourth, however, Manny Machado and Schoop hit successive doubles before Davis ended a 0-for-12 skid with an RBI single and Tim Beckham added a sacrifice fly for a 3-1 lead.

“I thought we did a great job tonight of just hanging in there, getting the runs when we could and not trying to do too much,” Davis said. “Hopefully, we can build off of that.”

“I felt like I got better as the game went on,” the right-hander said. “My command got better.”

Brad Brach worked the ninth for his third save.

Aledmys Diaz homered for the Blue Jays, who fell to 6-1 this season when scoring first. Toronto was also denied its first three-game road sweep since Aug. 21-23, 2016, against the Los Angeles Angels.

Marco Estrada (1-1) allowed four runs and six hits in four-plus innings. The right-hander was 7-1 in 13 starts against Baltimore, including 3-0 last year.

“The results weren’t good, but I thought his stuff was better than that,” manager John Gibbons said

Estrada had some discomfort in his lower back. However, he said that was not the reason for his struggle.

“As the game went on, I just lost control and wasn’t making pitches anymore,” Estrada said.

After Yangervis Solarte hit a two-out RBI single in the Toronto fifth, Baltimore benefited from its first challenge of the season to make it 4-2 in the bottom half.

With runners on first and second, Machado lifted a fly ball that right fielder Randal Grichuk dived for and missed near the foul line. It was originally ruled a foul ball, but the umpires reversed the call to a single and Schoop followed with an RBI single that ended Estrada’s night.

Diaz hit his third homer of the season in the sixth before rookie Chance Sisco singled in a run in the Baltimore half.

Machado went deep in the hole at shortstop to make a backhand grab of a grounder by Justin Smoak before throwing out the runner from short left field.

Keeping in mind that Machado played third base before this season, Showalter said, “I kept telling everybody that he would make some plays that most shortstops can’t make. That was one of them. No one else can generate that type of arm strength from that angle.”

Blue Jays: 1B Kendrys Morales, who went on the 10-day disabled list Tuesday with a strained right hamstring, hit off a tee Wednesday.

Orioles: DH Mark Trumbo (strained right quad) was removed from his rehabilitation assignment after playing just one game with Double-A Bowie on Tuesday night. Trumbo “just didn’t feel like pushing it. He still wasn’t comfortable with it,” Showalter said.

The Orioles optioned top pitching prospect Hunter Harvey to Bowie and recalled INF Engelb Vielma from Triple-A Norfolk. Harvey, the 22nd overall pick in the 2013 draft, spent two days in Baltimore as a potential long reliever but was not needed. Thus, his big league debut will occur at a later date.

Blue Jays: After taking Thursday off, Toronto calls upon Marcus Stroman (0-1, 8.38 ERA) to launch a three-game series in Cleveland.

Orioles: Following Thursday off, Baltimore sends Chris Tillman (0-2, 8.68) to the mound in the opener of a four-game series in Boston.

IndyCar on an upswing as NASCAR stumbles over itself